Spotted by Jarig quite recently in the Oude Houthaven, Amsterdam, a house flag described as horizontally divided 1:4:1 black-red-black, in the centre a large white diamond bearing black initials ‘mbs’. As luck would have it, this flag and a predecessor (table flags, really) were offered on German eBay some time ago by “freschkali”, item no. 200086955556, end 17 March 2007.

Which is the older I do not really know, in any case the flag on the left uses a rather striking lower case typeface on a large flattened diamond.
The other one is rather more classic – smaller diamond, upper case initials.

Identified as ‘Montan Brennstoffhandel und Schiffahrt GmbH & Co. KG’, Mannheim (the town where the River Neckar flows into the Rhine).  ‘Montan’
in German indicates something related to coal and iron industry whereas ‘Brennstoffhandel und Schiffahrt’ mean mineral oil trade and shipping, to be sure.
The company has no web presence it seems although some traces on the web exist – for instance, MBS no longer has a subsidiary at Duisburg.
To complicate matters this is not the only German company using the initials, MBS.
Jan Mertens, 24 May 2007 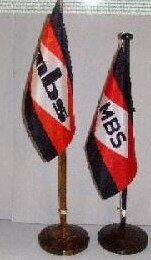