The battalions of Estonian defence forces have historical connections to the pre-war battalions, they have taken the old names and old symbols (from the 1930es) of them.
Indrek Kiverik, 15 July 2002

Estonian Defence Forces (Eesti Kaitsevägi) - Joint Services flag: Estonian Banner-of-Arms with five sleeves and golden fringes, on a brown pole topped with a golden spearhead hollowed with the shape of the three lions as on the Banner-of-Arms itself.
The image is based on official EDF illustrations as shown on Wikipedia.
Miles Li, 31 July 2008

The image is based on official EDF illustrations as shown on Wikipedia.
Miles Li, 31 July 2008

Estonian Defence League (Eesti Kaitseliit): Home Guard organization. Silver eagle facing sinister (i.e. the fly) holding a sword and a shield (Estonian Coat of Arms) on a yellow background. The version illustrated is intended to be hoisted from outdoor flagpoles; a similar design with a smaller badge appears on the reverse side of each EDL regional unit (Malev) flag, so that the eagle, still facing sinister, faces the hoist, while the obverse side has a different design for each flag.
The image is based on official EDF illustrations as shown on Wikipedia.
Miles Li, 31 July 2008

This is the background of the flags of Estonian infantery battalions from <www.mil.ee>.
Indrek Kiverik, 7 September 2001 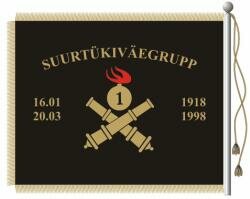 Front side of the flag of Estonian Artillery Battalion. The source is <www.mil.ee>.
Indrek Kiverik, 15 July 2002 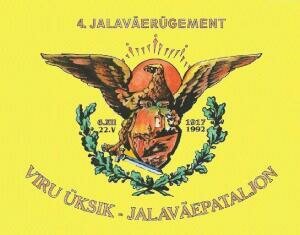 I saw this flag in a photo of a special report about Estonian Armed Forces at "Defensa" (Defence Magazine). The Noored Kotkad is the young wing of the National Guard of Estonia.There ia a B/W photo of the President of Estonia leaning in front of the Noored Kotkad flag to show respect.
Source: <www.mil.ee>.
Santiago Tazon, 7 October 2001 and Indrek Kiverik, 21 May 2002