In an article about the Union Jack in a 1952-1953 issue of "Coat of Arms", the journal of the Heraldry Society, Commander Messenger wrote, "Instead of counter-colouring the saltire alone, the heralds might also have done the same with the field and then overlaid the cross of St George. Doubtless that may have occurred to them but after considering it they found the result would have been far less happy. Blazon: Gironny azure and silver a saltire gironny silver and gules bordered silver overlaid by a cross gules bordered silver."

Reconstruction of the blazon of an alternative design of the 1801 Union Jack as described in David Prothero's message on this subject.

In an article on the Union Jack, Emanuel Green wrote,

"The St George being a cross proper was not interfered with by the saltire of St Patrick, and consequently remained intact. This has been the cause of some further rather small jealousy from North Britain. As in the previous case in the first Union with the saltire of St Andrew it could not be otherwise. Had St Patrick come with a cross instead of a saltire, a cross the reverse in colours to St George say a white cross on a red ground, then St George must have been interfered with and the saltire of St Andrew left intact. Supposing this, and that the Heralds followed the same plan, St Patrick's white would have been quartered and counter-changed on and with St George giving it the necessary red border, as is now given by the white of St Andrew, producing something like .....?"

I have looked at your website with interest and accepted your invitation to send a drawing of the alternative UK flag as described by Emanuel Green. As you can imagine, the results are not satisfactory. The nearest I can get to the description is this image (above). Incorporating part of the red field of the white cross necessitates the addition of further white stripes in order to avoid breaching the heraldic rule which requires a metal to come between colours. The red stripes appear only where they do because precedence is given to England and Scotland. I *think* this is what Emanuel Green describes but I can't imagine why he seems to think part of the red field of the white cross should appear; possibly because it is the only way to give precedence to the Scottish saltire over the Irish. The odd shape of the red cross is an attempt to give England precedence over Ireland.

I feel that this is a less ugly design. Unfortunately, whilst it gives precedence to England, it fails to give Scotland precedence over Ireland.

I venture to suggest that this third design is not unpleasant but again it fails to get the order of precedence correct.

There is one other possibility to consider. St. Patrick did not "come with a...saltire". The 'St. Patrick's Cross' was not, of course, the flag of Ireland. The red saltire was chosen by the heralds from the Fitzgerald arms to represent Ireland because it would fit into the existing Union Flag well. Presumably they could have chosen the arms of just about any reasonably prominent Irish family. That offers a huge range of possibilities!

Trying to come up with alternative emphasises how well the heralds did their job. I can imagine those whose job it was to choose the new flag seeing the now-familiar design for the first time and saying, "Yes, that's it!" 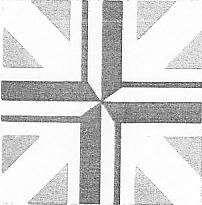 This is Emanuel Green's solution to the question of the appearance of the Union Jack if St Patrick had come with a white cross on red instead of a red saltire on white. His idea of, 'St Patrick's white would have been quartered and counter-changed on and with St George, the red of St George giving it the necessary red border, as now is given by the white of St Andrew'. Whether this gives the white saltire precedence over the white cross is debatable?