According to the East Sussex County web page, giving the Minutes of a meeting of the East Sussex county council held at Pelham House, Lewes, on Tuesday, 15 October 2002 at 10.00 am, the English County of East Sussex has its own flag:

"37.10 The Chairman referred to the two new flags, the County flag and the Union flag, on display in the Council Chamber which had been donated by two members."
Pascal Vagnat, 30 January 2003 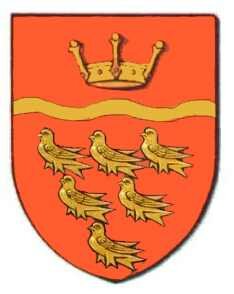 On http://www.eastsussexcc.gov.uk you can find the coat of arms of East Sussex. There is a high probability that East Sussex uses a banner of arms, according to my experiences with British subnational / county flags.
Dirk Schönberger, 30 January 2003

The Arms of East Sussex were granted in 1889 and are of ancient origin. The Arms of East Sussex as shown are very similar to the symbol/banner attributed to the ancient Kingdom of Sussex (6th-8th Century) except that it contained only the six golden "martlets" on a red background. The Arms of West Sussex County have the six golden martlets on a blue background with a similar golden wavy strip. After 1974 the arms were adjusted to add a crown with oak leaves on the top to symbolise a part of Surrey which Sussex absorbed (Gatwick Airport).
James Frankcom, 13 October 2003

The design of the flag for Sussex, produced by the Sussex Party which has been formed to put the case for a parliament for Sussex. We work closely with other regionalist movements in the British Isles. The flag is four bands. The top also has a yellow circle in the top left corner. The circle represents the sun. the first band (blue) the sky, the second band (green) the Downs, the third band (yellow) the beaches and the fourth band (blue) the sea. The flag is a deliberate departure from the rather staid and historic flags adopted by other regionalist movements in Britain. I imagine commercial production of the flag will be started in the not too distant future, once we've done a bit of publicity/marketing!
Steve Sainsbury MA, Chair, The Sussex Party, 11 March 2004