The drawings above are based on illustrations in Wilson's Flags at Sea. Wilson notes that several different versions of the Guinea Jack of the Royal Africa Company have been depicted in various forms in flag plates from the 17th and 18th centuries. The jack consisted of a St George's Cross within a double border of red and white chequers. Wilson notes the last Guinea company was dissolved in 1752.

The first image above is based on illustration 38 in Wilson, which is a black and white representation using the Petra Sancta system for color identification. The illustration shows the lines surrounding the white areas - possibly stitching? The second image above is based on a flag chart by B. Lens, circa 1700, A General View of the Flags which most Nations bear at Sea, where it is labeled as "Guiny Comp. Ens.". It is reproduced in Wilson.

Long before the establishment of Jamestown, English captains had made occasional profits in the rising trans-Atlantic slave trade. Bur during the early years of the 17th century, the English generally viewed the trading of human lives with a certain degree of contempt. By 1640, however, with the growth of sugar plantations in the Caribbean and the corresponding need for labor, the views of the English had changed. They, too, would become regular participants in the trade.

In 1660, the English government chartered a company called the "Company of Royal Adventurers Trading to Africa." At first the company was mismanaged, but in 1663 it was reorganized. A new objective clearly stated that the company would engage in the slave trade. To the great dissatisfaction of England's merchants, only the Company of Royal Adventurers could now engage in the trade.

The Company did not fare well, due mainly to the war with Holland, and in 1667, it collapsed. But out of its ashes emerged a new company: The Royal African Company. Founded in 1672, the Royal African Company was granted a similar monopoly in the slave trade. Between 1680 and 1686, the Company transported an average of 5,000 slaves a year. Between 1680 and 1688, it sponsored 249 voyages to Africa.

Still, rival English merchants were not amused. In 1698, Parliament yielded to their demands and opened the slave trade to all. With the end of the monopoly, the number of slaves transported on English ships would increase dramatically -- to an average of over 20,000 a year.

By the end of the 17th century, England led the world in the trafficking of slaves 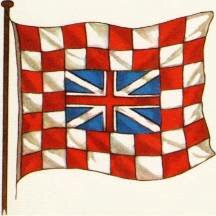 This flag for the Guinea Company differs from those shown above in that it uses the Union Flag, rather than St George's cross. This one comes from Flags over South Africa, by R Gerard, published by the Pretoria Technical College in 1952.
Mike Oettle, 7 May 2002

This was the Royal Africa Company, known colloquially as the Guinea Company because it traded on the Guinea Coast, roughly Gambia to the mouths of the Niger. Established in the early 1660s to deal in gold and ivory, but later mainly engaged in the slave trade. Granted Royal Charter 1672.

The flag might be an error. Wilson in "Flags at Sea" refers to a painting of 1664, and also a captured flag in the Rijksmuseum in Amsterdam, both of which have only a St George's cross in the centre of the double red and white chequered border. No book that I have seen shows the flag with a Union Jack, though there is a flag marked "Gvnie Jak" in Downman's Notebook on page 68 of Flags at Sea, which is effectively a 1606 Union Jack with all the blue replaced by red.

With a Union Jack in the centre it is theoretically wrong in that the Royal Proclamation of 18 September 1674, "commands all His Subjects whatsoever, that from henceforth they do not presume to wear His Majesties Jack (commonly called the Union Jack) in any of their ships or vessels, without particular warrant for their so doing from His Majesty, or the Lord High Admiral of England, or the Commissioners for executing the Office of Lord High Admiral for the time being;"

Perhaps it was used briefly before 1674, but there does not seem to be any evidence for it ?

Although the company came to an end in 1752, it influenced the design of the badge used in the 1870s on West African colonial flags. Gold from the Guinea coast was used to mint an English coin called a guinea, equivalent in value to a pound of silver. In reference to the ivory trade an elephant was incorporated into the design of the coin, and also into the design of the Public Seal of the Gold Coast (Ghana). This was later transferred from the Seal and used, with a palm tree and lettering, as the flag badge of not only Gold Coast, but also West African Settlements, Gambia, Sierra Leone and Lagos.