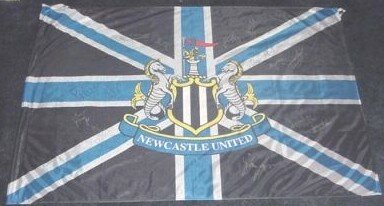 Football club, especially from the north of England, often use a union jack design employing team colours.  This is an official Newcastle United flag from the mega store at St James Park. It is signed by many of the players. 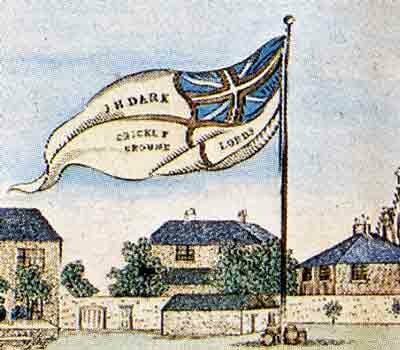 Here is a flag extract from a representation of the historical match played in 1837, between the north and south England. Here is the exact text around the picture:

THE GRAND JUBILEE MATCH PLAYED MONDAY JULY 10TH 1837 - AT LORDS GROUND BETWEEN THE NORTH AND SOUTH OF ENGLAND - BOX AND COBBET GIVEN TO THE FORMER TO COMMEMORATE THE 50TH YEAR OF THE MARYLEBONE CLUB.

This flag is that J.H.Dark, the leaseholder of Lord's Cricket ground from the time of Thomas Lord's death in the early 1930s until the mid-1860s. I suspect the colours of the flag are a mistake, and that it is simply a British White Ensign with writing on it. James Dark was the owner of the cricket ground (in north London) on
which this match took place, between 1835 and 1864. However, as the caption states, it was always known as Lord's (and still is), after the original owner, who opened it in 1814. The Marylebone Cricket Club are now the owners. Such defaced flags were quite common at public celebrations, or major sporting events such as this one.