Use of the ensign

Some countries have given special privilege to yacht club members to fly a special ensign (as well as some countries have the naval reserve ensign privilege, for which I have the same question). Once one has received such a privilege (or right) - is he obliged to conduct it? I mean, if one is member of one of the named clubs - is it legal for him to fly the "usual" civil ensign?
D;eljko Heimer, 29 January 2000

The answer is yes, as far as British practice is concerned.

If the person named on the warrant is also a member of another yacht club, he ought not to fly the special ensign on the named boat, if he is flying the burgee of the other club. The special ensign and the burgee should match. This has not been specified in the warrant regulations because it is appreciated that there might be circumstances in which it is not appropriate. One example given in explaining this was of an owner entitled to a special ensign who was also a member of a Belgian yacht club. Whenever he visited the Belgian club he flew the special ensign, but as a courtesy, flew the burgee of the Belgian club. He should more correctly have flown the undefaced Red Ensign, but special ensigns have prestige which owners are reluctant to relinquish, even temporarily.

British yacht club special ensigns can be, (in order of "seniority"), the White Ensign (Royal Yacht Squadron), undefaced Blue Ensign (32 clubs), Blue Ensign defaced with the badge of the club (57) or Red Ensign defaced (14). There is also a defaced RAF Ensign for the RAF Sailing Association, but I don't know where that fits into the pecking order.

Royal Naval Reserve Blue Ensigns on merchant ships were similar. Named master for named ship. Originally when the master took command of another ship he had to re-apply for a new warrant, but this was changed so that he could carry-over the warrant, but only if the ship was owned by the same shipping company. He had to inform the Admiralty of the change, and there had to be enough naval reservists in the crew of the new ship to qualify. I would be surprised if there are any merchant ships that still fly the Blue Ensign.
David Prothero, 9 February 2000

In 1922, according to Perrin (Page 139), there were 42 clubs entitled to fly the Blue Ensign "either plain or defaced", with 8 being "allowed to deface the Red Ensign with their particular badge". A total of 53 including the Royal Yacht Squadron.
Christopher Southworth, 5 November 2003

It all depends how you count them, and how you define a British yacht club. There are 104 clubs in the Navy List. If you add the RAF Sailing Association there are 105, but only 77 are in the United Kingdom. Of the 105 ensigns 27 are plain Blue, three Blue Ensigns have the same badge, as do two Red Ensigns, which makes 76 different ensigns. I don't agree with Perrin's figures. In 1922 I reckon there were 34 clubs with plain Blue Ensigns, 30 with defaced Blue Ensigns, and 8 with defaced Red Ensigns. The list of yacht clubs having a special ensign is on pages 244 - 247 of the Navy List at
http://www.rnreference.mod.uk/02/CNOA/NavyList/Current/navylist.pdf
David Prothero, 11 November 2003

I think that I have found out why my figures for yacht clubs with special ensigns in 1922 don't match Perrin's figures. Mine was a grand total; Perrin appears not to have included Dominion clubs. The first warrants were issued in 1829. In 1840 2 clubs had plain Blue Ensigns, 1 had a defaced Red Ensign, and 8 had various forms of White Ensign.

When a United Kingdom blue ensign right is granted to a yacht club, how is it decided whether the ensign should be defaced or undefaced?
Bryan-Kinns Merrick, 15 November 2002

Originally it was, as far as I have been able to establish, the choice of the club. In 1927 it was decided that since a plain Blue Ensign was the ensign of the Royal Naval Reserve, no more would be authorised for yacht clubs. In fact three more were authorised, but only for Service clubs; Royal Naval Sailing Association in 1936, Royal Naval Volunteer Reserve YC in 1958 and Royal Marines Sailing Club in 1965.

On the website of a yacht club (I forgot which) I read that the ensign was undefaced if the club was already "Royal".
Bryan-Kinns Merrick, 15 November 2002

Yacht clubs do not have royal charters. It is simply a title which they are permitted to use, as a prefix to the name of the club. In the latter part of the 19th century some clubs that wanted a special ensign, would apply to the Home Office for the title 'royal', in the belief that possessing the title would improve their chances of being granted an ensign. It actually worked the other way round. Any requests for the 'royal' title received by the Home Office were passed to the Admiralty with the question, "Does this club have a special ensign, and if not, would one be granted if it applied?" If the Admiralty replied, "No", and "Would not", the club's request was almost certain to be refused.
David Prothero,  16 November 2002

An example of a light blue British yacht ensign, from the RAF Sailing Association from www.rafsa.org.uk

The Royal Burnham Yacht Club ensign is a blue ensign with a royal crown in the fly.
Graham Bartram, 9 May 2004

Norie and Hobbs (1848) describes this flag defaced with a bird.  The error presumably originated when the tongue was mistaken for a beak and the jagged neck for feathers. The error has been repeated in other books including the 1905 Flaggenbuch and the 1923 Album des Pavillons.

The Dunpy Pocketbook (1960) has a dog-like head, presumably white, but drawn furred (it's in black and white, so the alternative is that is plain and yellow). But then, this being an English publication from a time with easier communications, they probably asked the club directly.

A Blue Ensign, a yellow climbing lion in the lower-fly, one-third of the width and two-thirds of the height.
Peter Hans van den Muijzenberg, 12 November 2001

The Club first used a plain white ensign, defaced with a club badge during the 1830s. Then, in 1842, the Admiralty decided that the White Ensign should be exclusive to the Royal Yacht Squadron (the nation's senior club). Thereafter, from mid-1842 until 1848, the RTYC used a Blue Ensign that was defaced in the fly with a crown (and I believe this was a red-colored depiction of the Royal crown).

In 1848, the club changed to a plain Blue Ensign, and this has remained the same ever since. I do not know the reason why the crown was removed in 1848. I do know that the plain Blue Ensign ranks higher in precedence than a defaced version. 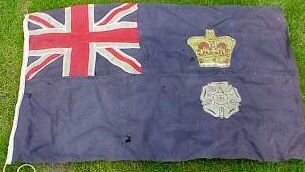 The ensign of the Royal Yorkshire Yacht Club (and granted in 1929, Victorian crown notwithstanding).
Ian Sumner, 25 June 2002

The special ensign of the RYYC was granted in 1879, but transferred from the Red Ensign to the Blue Ensign in 1929.
David Prothero, 26 June 2002

That is the blue ensign of the Royal Yorkshire Yacht Club. The white rose is the emblem of Yorkshire, while the red rose is the emblem of Lancashire. When the House of Lancaster fought the House of York for the crown of England it was called the War of the Roses. The Tudors combined both the red rose and white rose to make the Tudor rose (red petals on the outside, white on the inside) and ever since the Tudor rose has been used for Royal Heraldry when a general rose is required. The separate white and red roses are still used by their respective counties and by state official especially connected with them. For example York Herald's emblem is a sun with a white rose in the centre, a "Rose en soleil".
Graham Bartram, 15 August 2000

Blue burgee with a green lozenge placed horizontally charged with a white S.  Sheppey Yacht Club is located in Sheerness, in the north of Kent, on the Isle of Sheppey. The club was founded in 1932. I interpret the burgee as showing the island in green within the sea in blue. Source: www.dinghyweb.com/syc/

Burgee vertically divided black-white-yellow. The Wilsonian Sailing Club is on the north bank of the river Medway close to the village of Hoo, near Rochester. It is probably the largest club solely for dinghy sailors in the north of Kent. Source: www.wilsoniansc.org.uk