by Roberto Breschi from CISV

Trieste isn't a region but a town, the capital of the region Friuli-Venezia Giulia, and also a province in this region. The flag of Trieste as well as the flag of the former Free Territory of Trieste, are plain red with the top of a lance in white.The proportions I found are 7:10, but there could be other.
Pascal Vagnat, 22 September 1998

The exact name for the lance is "halberd" (in Italian "alabarda"), like the lance used by the Vatican Swiss Guard.
Paolo Zaccaria, 16 June 2000

According to my handy encyclopedia, the pole-arm whose head appears on these Trieste flags is called a ranseur.  A halberd has an ax-head in place of one of the hooks
John Ayer, 5 October 2000

Although technically the Trieste's coat of arm should be named ranseur rather than helberd, everybody in Trieste name it  "alabarda", i.e. helberd.
Paolo Zaccaria, 7 April 2005 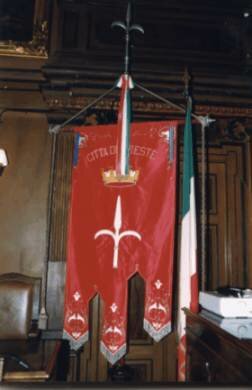 This is the coat of arms of Trieste, but it represented the whole Trieste territory, which is the small region of which Trieste is part, giving its name to it; so, i disagree with Pascal Vagnat (on your site), who says that Trieste isn't a region but a town, because actually it's both of them. This coat of arms was the official coat of arms of the Free Territory of Trieste as mentioned in the consitution of the FTT. It was mainly used in Zone A. This coat of arms in not used officially today; but it is commonly used as general identification for this territory, and politically by independentists (i.e. people who want to bring back the FTT).
Alex Belfi, 29 September 2000

" Trieste (Associazione per Trieste autonomy movement) - North-East Italy." - Red field with a white spearhead.
This flag is listed under number 48 at the chart "Flags of Aspirant Peoples" [eba94].
Ivan Sache

Historical Flags and Coat of Arms

From 1382 to 1918 Trieste was Austrian, so the previous flag was a golden halberd on an Austrian flag (red/white/red horizontal stripes).
The coat of arms of the town was similar and was confered by the emperor Friedrich III of Habsburg in 1464. Here is a scan of a more recent copy of the conferal document, dated 1691 and conserved in the Trieste's library.
Paolo Zaccaria, 16 June 2000

This coat of arms was used before World War II and most of the times (and officially after 1933), it featured a fascio
Alex Belfi, 29 September 2000