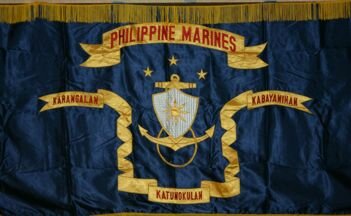 The correct color is scarlet or blue. In the center is the Sun Shield and Anchor emblem of the Philippine Marine Corps with the words Karangalan Katungkulan Kabayanihan etched on a scroll bordering the lower half of the emblem. A small image of the red version can be seen at this location or in use on parade here.
Frank Suha, 29 September 2004

The seal of the Philippine Marines is a compact symbol of everything that the Corps stands for. The anchor signifies that the Marines form part of the Philippine Navy. The closed anchor chain depicts the strong bond between the Fleet and the Marines. The shield represents the Marines' defense mission. The sun's eight rays depict the first provinces that revolted against Spain -- linking the gallantry and nationalist spirit of the Revolutionaries to those of the present-day Marines. Inscribed on the scroll are the three ideals of the Marines: Karangalan, Katungkulan, Kabayanihan (Honor, Duty, Valor). The rope represents the strong bond that links Marines to one another, and its closed loop means that a Marine will forever remain a Marine. The background colors of Red and Gold symbolize courage and nobility.
Frank Suha, 5 October 2004

The scarlet version of the flag is laid out in the same way.
Frank Suha, 18 November 2004

Here is the flag of the Philippine Marine Corps Commandant, a position held by a major-general.
Miles Li, 7 September 2004

located by Miles Li from http://www.philippinemarinecorps.mil.ph

The Philippine Marine Basic Training Class flag. Usually a platoon or company sized unit that is undergoing "Warrior" or recruit training to become members of the "Few and Proud..."  This flag was displayed at the Philippine Marine Association Birthday Ball this November 04.
Frank Suha, 25 November 2004