The Philippine flag was sewn by the revolutionary junta in Hong Kong and first displayed in battle on May 28, 1898. It was formally unfurled during the proclamation of Philippine independence on June 12, 1898, by President Emilio Aguinaldo. The design as you will note adopted the mythical sun (with a face) common to many former Spanish colonies; the triangle of Masonry; the eight rays represent the first 8 provinces that revolted and were put under martial law by the Spaniards during the start of the Philippine Revolution in 1896; the flag was first unfurled with the blue stripe above, but was flown with the red stripe above upon the commencement of hostilities between the Filipinos and Americans in 1899.

According to historians, based on anecdotal evidence and the few flags from the era that have survived, the color of the original flag was the same blue and red as found on the Cuban Flag. My personal theory is that you will be able to trace the characteristics -the triangle at the hoist, the stripes, to the Spanish colonial navigational flags posted by a previous member. In the Philippines declaration of independence, the colors of the flag also represent homage to the United States as the then-ally of the first Philippine Republic.

This is evidenced by the above image which shows the still-original dimensions (note triangle and shape of sun), the adoption of the American shades of blue and red, but still a slightly more ornate sun. The adoption of the American colors is further evidenced from a party flag from the year 1922, which used the by-then well established Philippine national symbols of the sun and red, white, yellow and blue.

The result was the standardization of the flag, whose specifications have remained unchanged and in effect from 1936 to the present. The new dimensions and standardization, together with the American blue and red, can be seen below: [See text of the Executive Order 23 specifying the flag.] 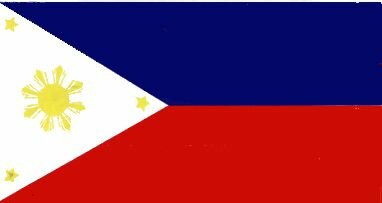 However, with the Japanese invasion and occupation of the Philippines in 1941, the Philippine flag was once more banned. It was allowed to be hoisted again with the establishment of the puppet (or Second) Philippine Republic. Accounts of the ceremonies held in October 1943, in which General Emilio Aguinaldo, first President of the first republic, hoisted the flag, point to the original Cuban blue and red colors being restored; I have seen portraits of officials from the same period which indicate that the mythical sun was restored in some instances though the 1936 dimensions seem to have been retained. At the same time, the Commonwealth government-in-exile in Washington continued to use the 1936 flag with the American colors, but even then, propaganda posters also indicate that Filipinos tended to use the Cuban blue and red as much as the American navy blue and shade of red.

The 1936 flag, with the navy blue, was restored upon the return of American forces in 1944 and it was this flag and those colors that were hoisted upon the recognition of Philippine independence by the United States on July 4, 1946. This remained the case until 1985, when President Ferdinand Marcos ordered the colours restored to the original Cuban blue and red. However the historians involved say that the flag factories at the time only had a pale sky blue available in quantity, and so this became the de facto official color. After the People Power Revolution in 1986, the Marcos colors and presidential seal and Marcos-era new national motto were abolished and the pre-1985 flag restored.

In 1998, for the centennial of the proclamation of Philippine independence, a law was passed changing the color of the flag not to Cuban blue, but to royal blue, as a compromise after a furious debate among historians and members of the public. The specifications of this color are in the law I posted to the list. The 1936 specifications in all other respects, however, remain in force.

Text of the Executive Order 23 specifying the flag

BY THE PRESIDENT OF THE PHILIPPINES
EXECUTIVE ORDER NO. 23

DESCRIPTION AND SPECIFICATIONS OF THE FILIPINO FLAG

Whereas, section one, Article XIII of the Constitution prescribes what the Philippine National Flag should be without giving descriptions and specifications; Whereas, Act Numbered Two thousand nine hundred and twenty-eight describes the construction of the Filipino Flag without the necessary specifications of the elements of the flag; Whereas, compliance with this Act has not been uniformly carried out and has caused the making of Filipino flags in disproportionate sizes with incorrect proportions of the different allegorical symbols of the flag; and Whereas, to avoid irregularities and discrepancies, it is necessary to follow the Constitutional provisions and Act Numbered Two thousand nine hundred and twenty-eight with uniformity; Now, there, I, Manuel L. Quezon, President of the Philippines, do hereby promulgate and order that the following specifications for the Philippine National Flag be strictly observed by all civil and military branches of the Government:

Done at the City of Manila, this twenty-fifth day of March, in the year of Our Lord, nineteen hundred and thirty-six, and of the Commonwealth of the Philippines, the first.

By the President:
Elpidio Quirino
Secretary of the Interior

Adjusting the rays on the flag?

The Philippine newspaper Sun-Star (published in Cebu City) reported that the idea of adjusting the number of rays on the sun in the flag of the Philippines was rejected by the country's Centennial Commission. I will quote the complete story below:

SUBIC Bay Freeport - Efforts to include Zambales among the eight provinces represented in the sun's rays of the Philippine flag have come to naught. The Philippine Centennial Commission has declared the basis used was the 1896 decree placing eight of the country's provinces under martial law. PCC Chairperson Salvador Laurel, who attended the Philippine Centennial Movement's congress of National Capital Region and Luzon chapters at the George Dewey Convention Center here, told Sun.Star News Service a team of historians rewriting the country's history recognizes the fact that Zambales is one of the provinces which staged a revolt against Spain almost the same time as the eight provinces represented in the flag. Laurel said, however, the basis used for selecting the provinces was the decree issued by Gov. General Ramon Blanco placing the provinces of Manila, Bulacan, Pampanga, Tarlac, Batangas, Laguna, Cavite and Nueva Ecija under martial law on Aug. 30, 1896 after the Battle of "San Juan del Monte." For nearly 10 years now, Zambales officials have strongly pushed the inclusion of their province represented in the sun's rays of the flag. The Provincial Board even had submitted a resolution on this but the National Historical Institute rejected this. Augusto de Viana, head researcher and officer-in-charge of the research and publication division of the National Historical Institute, clarified that the basis of the claim by Zambales officials was a decree issued by Gov. Gen. Camilo Polavieja on Dec. 24, 1896. The decree suspended elections and declared a state of emergency in the provinces of Bulacan, Batangas, Manila, Laguna, Cavite, Nueva Ecija, Pampanga and Zambales.
Sun.Star News Service

That was the story. I might just follow up with details from some more scattered news reports of flags in the Philippines. This year is the 100th anniversary of independence from Spanish colonial rule (12 June). Many events will take place, naturally many of them involving flags. Concern over the proper use and correct colours of the flag were also reported in various newspaper articles.

A Hong Kong newspaper reported earlier this year that Philippine officials are trying to have a plaque installed in the street in Hong Kong where the first Philippine flag was sewn. The Hong Kong Standard said that "The first Philippine flag, hoisted during the proclamation of independence, was sewn on Morrison Street by three Filipino women - Marcela Agoncillo, her daughter Lorenzana and Delfina Natividad, a niece of Dr Rizal." (Dr. Jose Rizal is a Philippine national hero). This took place in the spring of 1889. The South China Morning Post said that the original flag is kept at the Smithsonian Institution in the USA.

Concerning colours, the chairman of the National Centennial Commission said in a newspaper article that "the blue color of the flag has been restored to its original hue as prescribed by the National Historical Institute and as mandated under Executive Order No. 137, issued by President Macapagal in 1966." Apparently this restoration was made necessary by too many old and faded flags.

Another newspaper article reported that the President signed into law on 13 February this year "Republic Act 8491, the Code of the National Flag, Anthem, Motto, Coat of Arms and other Heraldic Items and Devices of the Philippines." Again, the motivation seems to have been concern that the national symbols were used inappropriately.
Jan Oskar Engene, 9 March 1998