From time to time the question arises what is the biggest / oldest / longest / etc. flag. This page will record some of the answers to these questions.

For more details on these Mexican flags, see Mexico.

On Saturday, June 12th the largest American and largest flag in the world was on display for one hour at Moffett Field in Mountain View California. This flag is 255 feet by 505 feet. It's by the Ski Demski who had the Stars and Stripes unfolded on the Hoover Dam.
Jarig Bakker, 02 May 1999

Ed: This can be seen at http://www.superflag.com/

The site http://www.fraternet.org/mdh/mdh_drapeau.htm shows a postcard (450 x 654 pixels) with a photography of the largest flag in the world.

According to the legend, it was displayed in Calais on 6 June 1998 and homologated by the Guinness Book. It is shown lying on soil and I doubt it ever flew. Dimensions are 125 x 90 m, therefore 11,250 sq. m. The text translated as:

"My deepest thanks to all of those who contributed to realize the largest flag in the world, the Tibetan flag. May all these merits be dedicated to freedom in Tibet and peace in the world. Signed by the Dalai-Lama, 6 December 1998".

As you can see, the total area of the US giant is a bit more, although the Tibetan's 1:1.3 ratio gives it a greater hoist.

Obviously, neither will ever fly from a pole.
William E. Dunning, 18 April 1999

According to the Gay Financial News, Gilbert Baker, creator of the Rainbow flag, put together the longest Rainbow flag for the upcoming Rainbow25 festival. The flag is projected to be 8,000 feet long by 16 feet wide in the original 8 colors. It surpasses a mile long flag used in New York in 1994 for Stonewall 25.
Phillip L. Nelson, 6 April 2003

- the Town Hall of Antwerpen, Belgium. It is said that they hang the flags of all the nations that have ships in the harbour. 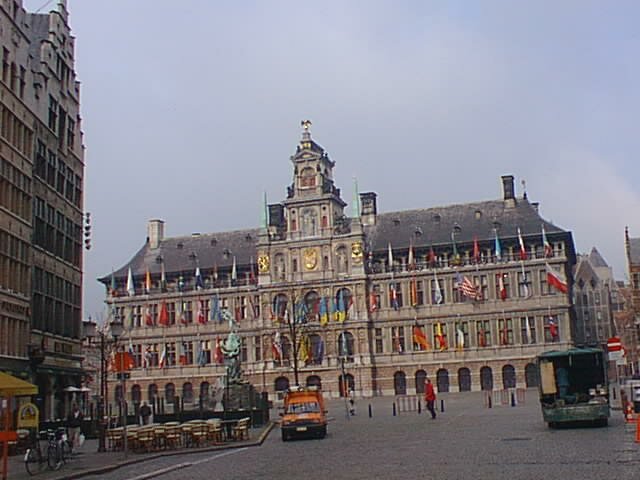 This picture shows only the front. To the left is another face with some more flags. In the center, first floor, are the flags of Belgium, Flanders, EU and Antwerp. On the second floor are the flags of the districts.

Flag with most colours

I think that flags with most colours are those with a seal, like flags of Haïti, St-Helena, Falkland Islands, Bermuda, Cayman Islands and so on and it's a little hard to count them precisely. Without a seal, it's certainly South Africa that have the most colours with 6, but we can also mention the local flag of St-Pierre & Miquelon. Any others ?

My (1982) version of Guinness Book of Records has these entries:

The tallest flagstaff in Great Britain is a 225 ft 68 m tall Douglas fir staff at Kew, Richmond upon Thames, Greater London. Cut in Canada, it was shipped across the Atlantic and towed up the River Thames on May 7 1958 to replace the old 214 ft 65 m tall staff of 1919.

The oldest known flag is one dating to c. 500 BC found in the excavation of the princesses graves in Hunan, Changsha, China. The Friesian flag still flown in the Netherlands dates from the 9th century AD.

We did it again....another (yet to be confirmed) World Record Unsupported Flagpole: 126.8 meters (410' for you non-metric hold-outs), Amman-Jordan, flies a 30x60m flag (also biggest flying flag on a non-supported flagpole). I know some of you are waiting for detailed photos of your own systems on the pole.
David Chambers, Trident Support, 16 June 2003

This month's issue of "National Geographic" magazine has the following text on page 12:

In the early light we can make out Kijongdong, North Korea's only DMZ village, an orderly collection of buildings fronted by a flagpole 52 stories high, the tallest in the world. A strong, cold wind, compliments of Siberia, barely manages to ripple the huge 600-pound red, white, and blue North Korean flag. Soldier of Fortune magazine, I had been told, will pay big money for a piece of that flag.

At an auction of Antarctic memorabilia a royal standard presented to Sir Ernest Shackleton by Queen Alexandra in 1914 was expected to fetch between 100,000 and 150,000 GB Pounds, and one of the sledge flags taken to the South Pole by Captain Scott in 1912, 60,000 GB Pounds.

If you believe what's written in newspapers, Shackleton "kept the flag wrapped under his tattered clothes" when he led his crew to safety, across 350 miles of frozen sea, and 800 miles in an open boat, after his ship was crushed in the ice.
David Prothero, 7 August 2002

According to Ivan Sache, one of the oldest references to flags on ships with purpose to identify the nationality is a treaty of 1297 between English king Edward I and Flemish duke Vido (sp?) where it is prescribed that "ship should fly the flag of her souvereign". Also, according to the same source, the flag gained the meaning of the national state identity only in 15th century (in England, many other navies retained practice of putting their identification markings on the sails until much longer).

In reference to Adriatic, the Republic of Ragusa (Dubrovnik) had flag prescribed already in the statutes of 1272 (I guess other small states in Adriatic and Tirene seas must have had similar at the same time). E.g. in the statute of the city of Senj from 14th century it was prescribed that a ship that enters the port without a flag shall be financially fined.
Zeljko Heimer, July 2002

Most flags on display

My neighbours flew in from Canberra and gave me a fact sheet of the International Flag Display there. Some points from the fact sheet "..To celebrate this unique aspect of Canberra (i.e. being home to 80 nationalities and cultures) as our capital, the National Capital Authority designed and created the International Flag Display". "The IFD is arguably the world's largest, continuous display of International Flags. Located on the foreshore of Lake Burley Griffin in Canberra's Parliamentary Zone, the Display colourfully acknowledges and is dedicated to those nations and organisations that maintain a diplomatic presence in the national capital." "Maintained by the Authority, the 80 flags fly continuously, 24-hours a day on 12-metre flagpoles. Each flag is lit at night, casting a beautiful and vivid reflection on the Lake ....etc..etc"

OK, some questions and issues:

(1) "arguably the world's largest ???" - any challenge from anywhere on this statement?

(2) "fly continuously, 24-hours a day" - smart move, save hoisting them up and lowering them.

In Madrid, the flags of all OAS member states can be seen on permanent display at the Casa de América (Linares Palace, Cibeles Square), and occasionally (on the 12th October for instance) at the Museo de América (near the start of the A6 highway). The flags of all Spanish autonomous communities are on permanent display at the Spanish Senate (near the Royal Palace) and at the IFEMA Trade Fair (halfway to the airport). Santiago Dotor, 25 January 2000

Three that I have seen:

1: The Commonwealth Institute in High Street Kensington, London, where all the member nation flags are flown, including Mozambique, and in October, even Pakistan, even though they had just been suspended. I was staying around the corner from the Institute, and it seemed as if the flags were up 24 hours a day. The poles are arranged in rows.

2: There are flags of all nations that the United States has diplomatic relations with in the US State Department. They are in a row, side-by-side, on poles attached to the wall about 5 meters above the ground. According to my almanac, the US has diplomatic relations with 180 nations, so the following 11 should not be represented: Bhutan, Cuba, Iran, Iraq, North Korea, Libya, Liechtenstein, Monaco, San Marino, Somalia, and Taiwan.

3: The Kennedy Center for the Performing Arts in Washington, DC, has two halls wherein flags are displayed; one is the Hall of States, and the other the Hall of Nations. I can't remember how many nations are represented, but I recall it being very comprehensive. The flags are on poles quite high up on the wall, perhaps 10 meters, along the walls of a long hall.

I also saw many national flags along the road outside the Foreign Office in London (is it Whitehall?) but I do not know if this a permanent display. They seemed to be mostly Commonwealth nations. I must say it was rather nice to see some "obscure" flags such as Tuvalu flying in public (for my first time anyway!)
Roger Moyer, 25 January 2000

These are on the road between Whitehall and St James's Park and so form the backdrop to the parade ground where the Trooping of the Colour and other state events take place. I think they are only flown during the Summer, but I must admit I haven't visited the area in Winter. The flags line both sides of the street and appear to be in random order until you remember that this is a display of Commonwealth countries and that they are ordered by their original entry (i.e. ignores any temporary absences) into the Commonwealth. They start by the Guards Memorial directly opposite the clock tower of Horseguards and work their way round anti-clockwise.
Graham Bartram, 25 January 2000

In searching a link recently sent to me by The Norwegian Post, I came across the following story dated May 17, 1999, which qualifies as perhaps a superlative in its own right:

The 200 inhabitants of Drevvatn north of Mosjoen didn't want to waste money on special transport when they took their 12 metre long flagpole to the town hall. They carried the pole the 35 kilometres from Mosjoen. After three years and 16,000 hours of voluntary work the town hall in Drevvatn is finished at last.

On Friday came the icing on the cake: a 12 metre flagpole given to the district as a gift. It came overland, reports NRK, carried by the fit townsfolk who didn't want to waste money on expensive transport. After five hours and 18 exchanges the world's longest relay baton has arrived and the flag is raised for the town hall, its bearers, and Norway's national day, the 17th May.

According to the electronic news bulletin of Cornell University, dated 1 April 2004, a small American national flag was etched on a silicon chip of the size of a postage stamp. Six full-colour flags and 15 White House, flying American flags, monochrome images were nano-produced and etched on the chip, using advanced photolithographic tools in the National Science Foundation (NSF)-supported Cornell Nanoscale Facility.
Ivan Sache, 17 April 2004

Oldest flags in use

Flag with the longest history of representing a people:
Catalans, image 1035, flag since 13th century?

Flag with the longest history of representing a country:
Denmark: Flag pictured 1340-1370 in the Gelre Armorial; supposed origin 1347.

Earliest adoption of a flag of a country:
Danmark 1625.

Flag with the longest history of representing a country and its people:
Dutch flag since approximately 1600.

Earliest adoption of a flag for a nation and its people:
United States 1777
France, several dates in 1794 (according to literature)

Largest Kite Decorated as a Flag

The world's biggest kite - a giant Kuwaiti flag - will be flying at the International Festival of Kites and Air Creations in Bristol this weekend.

The giant flag took 750 hours to make, using 27,000 sq ft of material. It weighs 400lbs and needs to be anchored to four-wheel drive trucks.