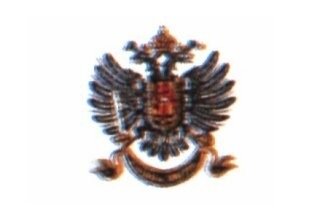 A curious establishment Austria has is the so called "Honour Flags" for Merchant-ship's captains, which were created in the year 1850. There are red and white Honour Flags. The former serves as a reward for skippers, who through nautical accomplishments and the propagation and furtherance of the Austrian shipping and the Austrian oversea trade in high degree have deserved well of their country or through the saving of castaways or other similar commendable acts have distinguished themselves. The Honour Flags are made of silk, have the black double eagle with an appropriate inscription and are after the death of the possessor preserved for all times in the municipal halls of the place of his birth.
Translated  from Siegel (1912) by Marco Pribilla, 2 December 2001

The white honour flag (for nautical merits) and the red honour flag (for warlike merits) bore the Imperial Double Eagle with a black diagonal band in the obverse that contained the words 'Merito navali' or 'Fortitudini navali' respectively. The reverse was decorated with the motto 'Viribus unitis'."
Translated  from Diem (1995) by Peter Hans van den Muijzenberg, 1 December 2001

The honourary naval flags called Merito navali and Fortitudini navali were established in the Austrian-Hungarian navy [navy here means both military and merchant marine] as a symbol of appreciation of deeds at sea and special merit in the navy. The flags were established by the Imperial patent [decree] of 16 April 1850 and they were of two colours bearing the same symbol - the imperial double eagle [i.e. the coat of arms with shield, collar, shields of crown-lands around, imperial crown above, sword and orb] and were inscribed "Viribus unitis" [together we shall win - the motto of the imperial navy]. The white flag - Merito navali - was awarded in peacetime for the results and successes in navigation on distant seas, in development of naval trade, in rescuing at sea or some other exceptional deed. The other, red flag - Fortitudini navali - was awarded for evident courage and exceptional deeds in combat on sea.

Both of these flags, the white and the red, were awarded by Austria-Hungary only once each, and both were given to Croatian seamen. The white honourary flag was awarded to Captain Ivo Visin of Pranj (Boka kotorska, today in Montenegro). He was the commander of the barque [a two-masted sailing ship] "Splendido" on which he sailed around the world from 1852 to 1859. Visin was the first Croatian, and only the sixth sailor in the world to repeat what Magellan did. [He was shown on Yugoslav postage stamps of early 1980's together with his ship, though I don't remember if any flag was shown there.]

The honourary red flag was awarded to Captain Antun Celestin Ivancic of Mali Lošinj, who together with his crew reliberated by the French captured the brig [sailing ship type] "Eolo" in 1859.

In an article on http://www.kotor.com/2001/articles/349.htm there is a brief reference on the present whereabouts of the only awarded white honour flag of Austria-Hungary. As I have reported previously, it was awarded to a captain born in Prčanj (Parzano, Parsano), Ivo Visin (also known as John Visin and Ivan Vizin; 1806-1868) for his round-the-world trip with his ship "Splendido" (also found "Splendito" e.g. in [leh86]).
As the regulations regarding the honour flags determine that the flag shall be preserved "for all the times" after the death of the captain who was granted it, in the city hall of his city of birth, I tried to track down if the flag still exists after all the turmoils.
I found a short reference on the pages regarding Prčanj at http://www.kotor.com/2001/articles/349.htm (translation by Zeljko Heimer):
Maritime Captain Ivan Vizin is the first among the South Slavs who sailed around the world with his ship "Splendido" between 1852 and 1859. For this he was granted by Austria with a white silk flag "Meritonavali", that is preserved in the parish church in Prčanj.
I contacted some people in Kotor inhope that I shall be able to find out more and evetually get a photo of the flag, but that may take time. In the mean time, anyone traveling to Montenegro might want not to miss that vex-jewel. I'll try to track down any reference to the red flag on the net, too.
Zeljko Heimer, 11 April 2004