The Australian Army does not have a flag. The Army is, however, the protector of the Australian National Flag.
David Cohen, 11 November 1997

I had a reply this week from the Australian Army's Ceremonial and Protocol office, who says:

'The Army's badge is the General Service badge (the 'Rising Sun'), but the badge you are referring to is the Australian Army emblem (a kangaroo ensigned with the crown and backed by crossed swords). It is only used by Land Command units; however, brigades within the Command use a badge of crossed swords behind the formation's number, below which is a boomerang (bearing the word 'BRIGADE') and above, the Crown (eg. 3rd Brigade's formation badge is the Arabic number 3 above a boomerang, backed by crossed swords, the whole ensigned with the crown).'

My enquiry also asked about Flag Stations. The Army says:

There are no special regulations for flag stations other than they are required to fly a large (3.6 x 1.8m) Australian National Flag on: Sundays, Australia Day, the anniversary of the Queen's accession to the Throne (6 Feb.), ANZAC Day, the anniversary of the Queen's coronation (2 June), official birthday of the Queen (as directed by Army HQ), the Queen Mother's birthday (4 Aug), Australian National Flag Day (3rd Sept), when an artillery salute is fired at a flag station, when directed by the Governor-General, on other occasions as ordered by Army HQ.

Here is the current version of the Australia's Chief of Army Flag. It replaces the old Chief of General Staff flag featuring the British lion-and-crown crest (see below). Note the badge on the new flag - the Army "rising sun" and the crossed swords - is the badge of the Chief of Army.
Miles Li, 7 October 2005

According to Malcolm Farrow's Colours of the Fleet [frr9X],

“Chief of the General Staff (Australia). Authorised 1/10/1992.
In 1992 the defacing badge of CGS(Australia) was changed from the traditional British Army crown and lion device in favour of the Australian Army General Service badge.”

The RAAF Manual of Ceremonial, AAP 5135.002, which is downloadable at this Air Cadet Corps site, states that this flag is a car flag only.
Joe McMillan, 22 November 2003

I believe it is also flown in front of the Department of Defence in Canberra.
Miles Li, 22 November 2003

The Chief of Army (formerly Chief of General Staff) flag is the Australian National Flag with the Royal Crest (crowned lion standing on crown) in full colours at the centre of the lower half of the flag.
Miles Li, 27 February 2002

Banner for the Centenary of the Army

Earlier today (March 10) a ceremony was held in Canberra to mark to centenary of the Australian army. The colours, guidons and banners of every unit of the Army took part - the first time since the Queen's silver jubilee almost 25 years ago. The highlight of the day was the presentation of a banner to the Army by the Governor-General. The banner is scarlet, with gold fringes, cords and tassels. The obverse of the banner bears the coat-of-arms of Australia. The reverse bears the 'rising sun' badge of the Australian Army, flanked by several battle honours commemorating every major conflict the Army has involved in for the last 100 years (example: World War I). This was the first time a ceremonial banner truly representive of the Army as a whole was presented to the Army.
Miles Li, 10 March 2001

I would guess that it's just a one-off ceremonial item, not intended to replace any of the forces' flags, or the tri-service flag.
David Cohen, 10 March 2001

This flag is officially simply called the Army Banner, and several photos of it (obverse only, showing the coat-of-arms, not the reverse with the 'rising sun' badge) can be found in the photo gallery of the official Australian Army website
Miles Li, 7 May 2001

The flag is obviously in the standard British colour size of 36 x 45 inches, crimson with the Australian arms in color on the obverse and the dates "1901-2001" in gold in the upper hoist. The reverse shows the army badge--a sunburst behind a red disk bearing the royal crown--and seven campaign honors on small gold-edged scrolls: South Africa, World War I, World War II, Korea, Malaya-Borneo, South Vietnam, and Peacekeeping. The flag is trimmed with gold fringe, has gold and crimson cords and tassels, and is mounted on a pike with the usual British royal crest finial.
Joe McMillan, 12 Feb 2005

The Times (London) has in today's edition (Saturday 24 May 2003) a photo of an Australian soldier in Iraq during a ceremony in Baghdad to mark the re-opening of the Australian diplomatic mission.

The flag on his shoulder is a very light shade of blue: 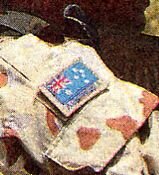 Several people suggested possible reasons. Christopher Southworth and Miles Li point out that it is probably deliberate, since using the blue in the union jack is normal dark blue, so it is not due to fading, and using two shades of blue would be more expensive. Ralph Kelly suggests that the lighter shade of blue is for camouflage reasons, and Christopher Southworth confirms that the lighter blue seems to be less visible against sand. However, Joe McMillan asks why, if that were the reason, do the colours in the canton have their normal shades? Al Kirsch wonders whether it may be an Air Force Ensign, with the roundel missing possibly because the patch is too small.
FOTW Discussion, 26 May 2003