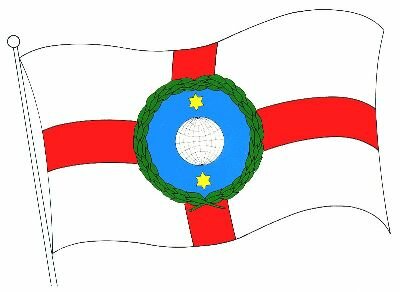 Description of the Flag

The Sutherland Shire's flag was designed in 1929 by C R Wylie, designer of the Canberra Coat of Arms. The design features a white background with the red cross of St George, the naval ensign under which Captain Cook sailed. Upon the centre of the cross is a circular blue field charged with golden polar stars and a globe from the arms of Captain Cook, surrounded by a wreath of laurel. Captain Cook is a significant figure for the Sutherland Shire (his portrait is part of the council logo) for he is credited as being the first European to discover Australia by landing at Kurnell (in the Sutherland Shire area) on April 29, 1770.

For the record, Captain Cook was the first European to discover the east coast of mainland Australia, and the first sighting of it was considerably south of Kurnell. The remarkable thing about Kurnell is not only that the Endeavour and her crew spent a fair bit of time there and in the general area of Botany Bay, but that their reports of the area were enough to cause it to be chosen as the location of the new penal colony. History tells that on arrival at Botany Bay in 1788 the colony chose to relocate slightly northwards to Port Jackson, in particular Sydney Cove.
Jonathan Dixon, 17 July 2003