The 1830 Honour flags are described by Roger Harmignies, President of the Heraldry and Vexillology Council of the French-Speaking Community in Belgium, in: Belgique : Les drapeaux d'honneur de 1830, Vexillacta [vxl] #3 (March 1999), pp. 7-8.

Origin of the honour flags

Belgium gained its independence from the Netherlands in fall 1830. On 27 September, the Dutch withdrew from Brussels and on 4 October, the independence was proclaimed. A few months later, on 14 January 1831, the provisory government of Belgium created by decree the honour star, a token of gratitude awarded to the citizens who had contributed to the independence of the country.

In May, the Congress cancelled the decree and proposed a more elaborated system of national tokens of gratitude: a honour star for the citizens devoted to the cause of the revolution, a star to be affixed on the monument built place des Martyrs in Brussels, honour flags to be awarded to the volunteers' corpses and the cities and municipalities which had contributed to the success of the revolution. Among those proposals, only the honour flags were accepted by the Congress. On 28 May 1831, Baron Beyts raised a motion which was transformed the same day in thefollowing law:

Law on the national awards

In the name of the Belgian people
The national Congress,

Considering it is just to reward the devotion of the municipalities which distinguished themselves by taking a glorious part to the triumph of the national cause,

Art. 1. Honour flags shall be distributed to the cities and municipalities whose volunteers went on places threatened by the enemy or contributed in an efficient way to the success of the revolution.
These flags shall have the national colours.
They shall be surmonted with a Belgian lion [lion belgique, that is the lion from the national coat of arms of Belgium], on the basis of which shall be on one side the word LIBERTE and one the other side the date MDCCCXXX [1830 in Roman numerals].

Art. 2. The commission awarding these flags shall be constituted of the currently active members of the Award Commission created in Brussels and of nine members of the Congress, appointed by the assembly and representing the different provinces.

Art. 3. The flags awarded by the commission shall be distributed by the Head of the State, in the name of the Belgian people.

Art. 4. The decree of the provisory government dated 14 January 1831 (Official gazette #VI) shall be revoked.

Gives the executive power the responsability of the implementation of the present decree.

The secretaries, members of the national Congress

The president of the national Congress

Description of the 1830 Honour flags 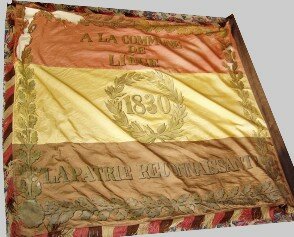 The honour flags all have the same pattern.

The size of the flag is 1.20 x 1.30 m. The flag is horizontally divided red-yellow-black, with a garland of golden oak leaves near the borders of the flag and a tricolor fringe around its free edges.

On both sides of the flag is written:

It is worth noting that those writings are not explicitely prescribed by the aforementioned law on the national awards.

The staff of the flag is made of glazed wood. The finial is a parallelepipedic pedestal on which is placed a lion standing up on its rearpaws and holding a peak surmonted by a liberty cap in its forepaws. According to the law, LIBERTY and MDCCCXXX are written on two opposed sides of the pedestal.

Distribution of the 1830 Honour flags

The honour flags were awarded to 100 cities and municipalities, including Maastricht, Roermond and Venlo (in eastern Limburg, kept by the Netherlands), Luxembourg and Paris (to honour the Parisian legion which came to Brussels in October 1830).

On 27 September 1832, the flags were distributed on the place Royale in Brussels. King Leopold I handed out the flags to delegations made of 3 to 5 people, including the mayor, municipal councillors and volunteers of each honoured city or municipality.
There were no representatives of Luxembourg and the three cities of eastern Limburg since those cities were no longer part of the kingdom of Belgium, according to the 24-article treaty accepted by Belgium on 14 October 1831. The flag awarded to Luxembourg was kept by the family of baron van der Straten and later given to the Army Royal Museum, where it is still preserved.
Paris should have been represented in Brussels by the duke of Orléans, son of the king of the French Louis-Philippe, but he did not come. What has become of the honour flags awarded to Paris and the cities of eastern Limburg is unknown.

The official ceremony of distribution of the honour flags was related in the Moniteur belge (Official gazette) on 28 September and in Le Courrier de la Meuse on 30 September. Each delegation was called according to the alphabetic order, was awarded its honour flag and certificate. The king said:

"I confide you this flag; the courage you showed is the evidence you will be able to defend it".

On 30 September, ceremonies were organized in most of the honoured cities when the delegations came back.

Preservation of the 1830 Honour flags

In 1981, the Army History Division conducted a survey on the preservation of the honour flags. Three quarters of the municipalities have kept the flag, at least the silk part. Some of these municipalities still use it during local and national celebrations. The honour flag of a dozen of municipalities has been lost. A few of those flags disappeared during the two World Wars. The honour flag of Dinant was believed to have been burned in 1914 but was found again in an antique shop in 1958. Some of the flags are in a very bad state and are kept in museums. Some were restored, like the flag of Saintes (Tubize) whereas replicas of some others were made, like in Brussels and Verviers.

Roger Harmignies' article is illustrated with a black-and-white image of the honour flag awarded to Leeuw-Saint-Pierre.