A royal proclamation establishes the National Flag of Canada, the current maple leaf flag. The Canadian Red and Blue Ensigns and Royal Canadian Navy use of the White Ensign go out of official use.
Dean Tiegs, 21 December 1997

The winning design in the competition to create a distinctive Canadian flag was actually based on the flag of the Royal Military College (http://www.rmc.ca) and was submitted by one of the academic staff of the College at that time.
R.M. (Mark) Lilienthal, 12 March 1999 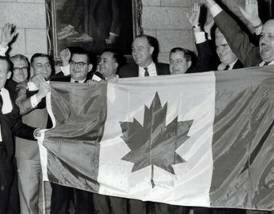 The Maple Leaf flag was a move by the Liberal government. The (Conservative) opposition leader at the time, John Diefenbaker (also a former Prime Minister), was so opposed to the flag change that at his request, his casket at his 1979 funeral was covered with both the Maple Leaf and the Red Ensign.

The 13 point leaf was the design approved by committee in October 1964. Following the manufacture of some full sized prototypes, the 11 point design by artist St.-Cyr was adopted by parliament (ironically M. St-Cyr himself was a Quebec separatist).

The original proposal, the "Pearson Pennant", was definitely identified with the Liberals, and had little or no support from the opposition parties.