Cape Breton Island is part of Nova Scotia, but retains a very strong sense of regional identity, with Scottish and French influences much more obvious in its culture than on mainland Nova Scotia. There has been an unofficial flag of CBI for many years, and when I went to try to buy one on my last visit there, I discovered that it no longer exists, and that this new official flag is there. The new flag is white (I'll let you decide if it's a bedsheet or not!) with four coloured bars across the bottom in blue over green over yellow over grey. These bars are separated by a narrow black fimbriation. The green bar rises up in the fly to silhouette a hill. Toward the hoist is a stylized green bald-headed eagle in flight. The four bars represent the usual things - blue for sea; green for green hills; I forget what yellow is but it is something to do with the people; grey for the coal that is mined there. Ratio: 1:2.

The old flag used in CBI was generally forest green (although one manufacturer insists she made in dark blue), with a yellow (or white) circle in the centre, carrying an outline map of CBI coloured in CBI tartan (green, yellow, black and white). I was hoping that I would get to post the first flag with tartan on it
Rob Raeside, 3 October 1997 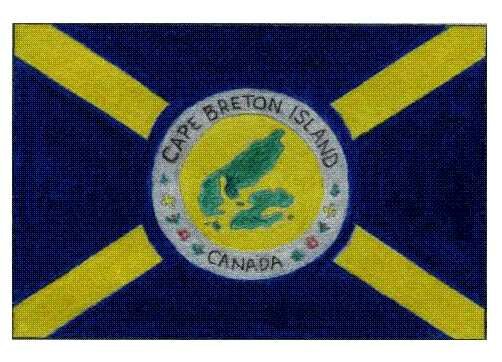 In the 1940s a local flag emerged. lt was designed by a Mr. Maclean of Ankerman St., Sydney.. lts design suggests a saltire on a blue field with a circle the centre. However the arms of the saltire are broken at the outer ring of the circle. The design reflects the flags of Scotland and Nova Scotia. A map, in green, of Cape Breton fills the gold disc inside the circle. On the grey outer ring appear the words, at the top, Cape Breton Island, at the bottom the word Canada, each in upper case. Between the words and on each side are five small symbols, a fir tree (for the Micmac Indians), a fleur-de-lis for the French settlers, a thistle for the Scottish, a rose for the English, and a shamrock for the Irish. Later immigrants are represented by the outer black ring. The blue field is the Atlantic Ocean, the arms of the saltire are gold and represent the four counties of Inverness, Richmond, Victoria, and Cape Breton. The green map indicates farming, mineral and lumber resources, and the beauty of the Island. The gold circle stands tor fishing and offshore resources. The inner black circle recalls the coal mines, the first major industry of Cape Breton Island. The grey circle represents the steel industry. The arms of the saltire are broken and the gap between these bars and the circle marks the crossing of settlers to the New World.

Keep in mind that until the white flag with an eagle appeared in 1997, there was no official flag for the island. However the island has a strong sense of regional identity, and it is no surprise that different people devised flags to represent the island. They were made locally, and I think both were sold in gift shops and tourist bureaus. My sense is that the yellow saltire on blue was more commonly seen in the 1980's, but the tartan map flag in the 1990's. That may have coincided with the declaration of the official tartan of CBI.
Rob Raeside, 19 February 2003