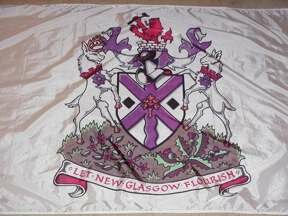 From the Town of New Glasgow:

New Glasgow is an engaging town situated along the banks of a river that winds serenely through the heart of the community. It is a thriving commercial centre with a population base of close to 10,000 residents and is on the northern shore of Nova Scotia, Canada just minute away from the beautiful waters of the Northumberland Strait. New Glasgow is the largest town within the Pictou County region and its neighbouring communities are the towns of Stellarton, Westville, Trenton and Pictou. New Glasgow town boundaries also are adjacent to many communities of the rural Municipality of the County of Pictou.

The Town’s prosperity and even its beginnings are entwined with the development of the scenic East River. The East River is a tidal estuary for salt and fresh water, where Atlantic salmon cruise and jump to spawn, and there is no doubt it was the charm of the river that drew the Scots to New Glasgow.

The community that was to become New Glasgow was settled in 1784 when Deacon Thomas Fraser built on land that is now the west side of the town. By 1809 the Town had been named after Old Glasgow in Scotland and was officially incorporated in 1875.

Enterprise and the entrepreneurial spirit were evident even in 1809 as James William Carmichael and George Amos established a trading post within the town that year. New Glasgow is still true to its roots in its role as the leading commercial and service centre for northern Nova Scotia. It is also conveniently located only 90 minutes from the Halifax International Airport and just under 2 hours drive away from Nova Scotia's capital city of Halifax. Access to both the airport and the metro area is along a divided highway system. New Glasgow is also only 15 minutes form the Northumberland Ferries Terminal in Caribou where a passenger/commercial ferry operates a 75 minute ride to Wood Islands PEI from May to December.

New Glasgow continues to attract new businesses and employers such as Convergys, a high tech customer service centre, the ICT call centre and large retails outlets such as Canadian Tire, Wal-Mart, Staples and Zellers and has been home to Maritime Steel for 100 years. New Glasgow is a thriving combination of small, mid size and large businesses.

The recent revitalization of the Riverfront is reminiscent of the glory days of the 19th century when New Glasgow had a thriving shipbuilding industry. New Glasgow is the birthplace of George MacKenzie, known as the father of Nova Scotia shipbuilding. Captain MacKenzie established a shipbuilding business in New Glasgow in 1840 and during his lifetime built or owned 34 vessels. When he withdrew from the business, it was taken over by his nephew James William Carmichael and the Carmichael-Stewart House Museum, located on Temperance Street, New Glasgow is a stately Victorian structure that has been transformed into a community museum, which pays now tribute to the shipbuilding heritage of the region. Hundreds of ships were built along New Glasgow’s East River.

Although founded by Scottish settlers, and named after Glasgow, Scotland, New Glasgow has always had a multi -cultural mosaic. A strong African Nova Scotia heritage as well as British, Irish, Dutch, French, Greek, First Nations and many other cultures enriches the community.

Six years before the arrival of the Ship Hector to New Scotland in 1773 and 100 years before the Birth of Canada, the first Afro-Nova Scotians came to Pictou County. The American War of Independence resulted in the largest single influx of Blacks to the province and most of these Black Loyalists were free and formed the foundation of the modern day presence in Nova Scotia. During the industrial age of the 19th Century, Black citizens from Tracadie came to Pictou County and most settled in New Glasgow.

There is also a strong tie to Trinidad and Tobago that began in the mid 1800s when a Presbyterian minister from New Glasgow travelled to Trinidad to establish the first school and is recognized as the founder of that country’s educational system.