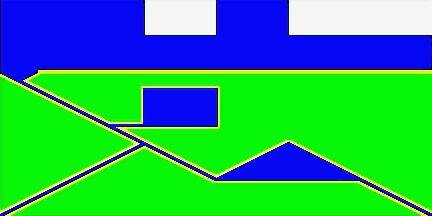 In 1999, when the new territory of Nunavut was formed from the Northwest Territories, some thought was given to symbols for the rump NWT.

This proposal symbolizes the geography of the NWT, and was designed by Robert Slaven, then a member of Yellowknife (NWT) city council.

The proposal was found at http://members.shaw.ca/robertslaven/politics.htm

Mr. Slaven, a former "Jeopardy!" champion, is a contestant on the current "Ultimate Jeopardy! Tournament", and has since moved to Surrey BC.
Dean McGee, 15 April 2005

Yellowknife (November 19, 1998) -The Special Committee on Western Identity today announced which official symbols it plans to incorporate as part of the "new Northwest Territories" after April 1, 1999.

The status of the official tree (jack pine) and the Government of the Northwest Territories logo (three legged polar bear) have yet to be determined. The Committee is also recommending the addition of a gemstone symbol, which would be the diamond.

The name "Northwest Territories" will continue to be used until such time as residents vote on a new constitution. This process is currently on hold. A change to the name and/or the constitution requires federal legislative approval.

Committee Chair, Seamus Henry said it's time western residents started getting excited about their new territory. "People in the west have a lot to be proud of. It's up to everyone to cultivate a new sense of pride and identity in who we are and what we stand for," said Mr. Henry. "The make-up of the new Northwest Territories includes Inuvialuit, Dene, Metis and many different non-aboriginal cultural groups. We have a lot of diversity. We have a lot to celebrate."

The Committee plans to solicit public input on designs for the new flag, mace and coat of arms. Announcements will be made in the coming weeks on the details and process.
Government of the Northwest Territories
contributed by Jan Oskar Engene, 23 November 1998

Search Begins for New Territorial Flag and Coat of Arms

Yellowknife (May 20, 1999) - The public search for ideas and designs for a new flag and coat of arms for the Northwest Territories was officially launched today with the release of a lively and colourful brochure produced by the Special Committee on Western Identity.

Committee Chair, Seamus Henry, said the brochure will be mailed to every household in the Northwest Territories and special kits will be sent to every school over the next few weeks. "There's a lot of public interest in these symbols. We've already had quite a few submissions over the last several months for designs. The Committee is anticipating a big response because people of all ages have a lot of pride in this territory and it's a chance to be a part of history."

Mr. Henry added that it was appropriate for a forum, such as the Youth Parliament held today, to be used as the means to announce the launch. "The youth are our future. They were very excited about the competitions and their opportunity to participate."

The brochure outlines details of the flag and coat of arms competitions, as well as suggestions, examples, research sources and points to consider in the designs of official symbols. A special submission form has also been included for ideas for the coat of arms for those who do not wish to draw a design. The deadline for both competitions is July 30, 1999.

In addition to mail distribution, brochures will be available at municipal offices in each community. An online version of the brochure will also be available on the NWT'99 website.

At the January 19, 2000 meeting of the NWT legislative assembly, Stephen Kakfwi was selected to be the premier. Kakfwi was a member of the identities committee that recommended changing several of the symbols of the NWT when Nunavut was created. At the January 19th session, the NWT adopted a new mace, the only real action other than the selection of a new premier.

In the transcripts of the January 19 meeting, it is noted that one of the priorities of Kakfwi was changing the flag (and other symbols) of the territory (this in the question and answer session just prior to being elected premier).

However, there is some opposition. The costs of transitioning impact not just the government, but also private companies that had prepared promotional literature about the NWT symbols... and the concern is the cost that may result to these privately printed or produced materials.
Phil Nelson, 08 February 2000