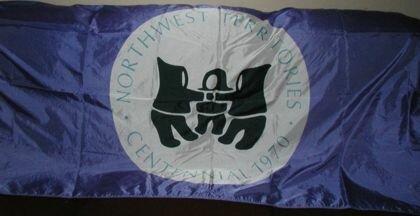 Northwest Territories Centennial Flag(s). These flags were issued during the centennial in 1970. The picture referenced on the photo archives of the NWT show two colors - blue and red. According to Fraser [fra98] there were several background colors used. The logotype is on a white roundel and features three Inuk dancers.
Phil Nelson, 26 August 1998

In the above photo, the flag is actualy purple, not the blue it looks like.
Brad Frank, 14 October 2006

[Ed: The logotype is not clear on the original photograph. FOTW believes the reconstruction to be accurate]