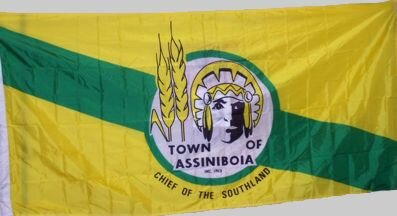 The Town crest was designed by an Assiniboia resident, John Lee in 1968.

His explanation of the crest is as follows:

The most obvious part is the Indian. He himself is anonymous, but he represents the Assiniboine Indians, the tribe from which we have taken the name of our town. He is symbolic of our heritage dating back to the earliest settler even before Assiniboia was incorporated as a town. The stalks of wheat contribute their golden color to the crest, and represent Assiniboia as it is today - a progressive agricultural community. The light green border represents the parks and resorts in the Assiniboia area, providing the finishing touch to the way of life for the residents of South Central Saskatchewan.

The slogan "Chief of the Southland" was suggested to go with the crest by Lila Martinson, another Assiniboia resident, in 1981 when the new Town Hall was built

The rest of the flag, was done to match the crest in the colors Mr. Lee had chosen.