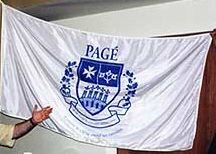 The association was founded on 20 December 1994. According to "Dictionnaire gťnťalogique des familles canadiennes" by His Grace Cyprien Tanguay, there was only one Pagť family in Nouvelle-France. All the today's Pagť therefore descend from this root. The first census made in February-March 1666 lists Raymond Paget dit Carcy, aged 62, carpenter, living in Beauprť with his wife Magdelaine Bergeronne, aged 50, and their four children Robert (23), Estienne (20), Suzanne (11) and Guillaume (8). The 1667 census adds that the Paget farms had 14 cleared arpents, which was big for the time, and nine heads of cattle. Raymond Pagť died on 20 November 1683, whereas Magdelaine survived him until 23 March 1687.

The exact origin of Raymond and Magdelaine is not known since no official documents have been preserved. However, Quercy is a straightforward hypothesis since Raymond was nicknamed ("dit") Carcy. Jacques Saint-Onge writes that Raymond Pagť (b. 1604) was most probably from Quercy and might have landed in Quebec with his family on 25 June 1647, after having been recruited by the Jesuit Father Pierre Bailloquet, from Bordeaux. Other historians have noticed that the region of Quercy has given very few emigrants to Canada in the XVIIth century. Among them, Douville believes that Raymond Pagť came from Picardy, which was a significant region of emigration to Canada in the XVIIth century and where the village of Quierzy still exists. Jacques Largillier, Raymond's nephew, was a good friend of Father Marquette, who came from Picardy. Douville assumes that the three men came from the same French region.

Anyway, the Pagť family seems to have considered for long that Raymond Pagť came from Quercy, as shown by its flag and arms.

The flag of the association is white with the blue-and-white version of the family coat of arms, surmonted by the name of the family written in blue Capital letters.

The Pagť coat of arms was created by Father Lucien Pagť and Jean Pagť in 1955. These arms were adopted as the official arms of the association on 31 May 1997, with Jean Pagť's permission. The description of the arms is:

The French-shaped shield recalls the origin of the founder of the lineage. The Maltese cross symbolizes faith. The maple leaf is the emblem of Canada. The bridge surmonted by towers and fleurs-de-lis is the coat of arms of Quercy. The oak symbolizes courage and perseverance to propagate the Christian faith and to preserve the family heritage. The motto reads "So does the oak spread its branches".

Quercy is a region of the south-west of France named after the oak, in Latin, "quercus". The arms of Quercy are today the municipal arms of Cahors, in the past the wealthy capital of Quercy. The bridge shown on the arms is the Pont Valentrť, which has six arches and three towers and crosses the river Lot. The bridge, registered on UNESCO World Heritage List, is the best preserved medieval bridge in Europe. Its building was ordered by the Consuls of Cahors in 1306 and started in 1308. The bridge was finished only in 1378, with of course the help of the devil. It was saved from destruction in 1879 by the architect Paul Gout. At that time, a small devil was added on the top of the central tower to recall the legend of the building of the bridge.
Source: mairie-cahors.fr/Tourisme