The university has a flag, based on the arms:

In June 1994, His Excellency the Right Honourable Ramon John Hnatyshyn, Governor General of Canada, presented the University of Alberta with its Coat of Arms. The full Coat of Arms is displayed at ceremonial occasions such as Convocation, and is used by the Chancellor, the titular head of the University.

The symbolism of the University's Armorial Bearings (Coat of Arms) is:

A representation of the topography of Alberta rendered in the colours of the University. At the base is a prairie wheat field symbolizing Alberta's agricultural industry. The wavy gold line above suggests the hills and rivers of Alberta and, in particular, the setting of the University campus. The top of the shield is in gold and separated from the rest of the shield by a line suggesting the Rocky Mountains. The book of learning dominates the design.

A Grand-Duc d'Amérique, or Great Horned Owl, the provincial bird and an accepted symbol of knowledge.

Compartment (base of the Coat of Arms)

A grassy mound with wild roses, the floral emblem of Alberta.

The Flag of the University is comprised of the shield of the Coat of Arms on a gold background.

Although the image appears to use white (Argent) for the shield base.

And about the University colors:

The original suggestion for green and gold University colours came from Marion Kirby Alexander, who drew her inspiration from the autumn colours of the river valley below the campus. Her husband, William Hardy Alexander, Professor of Classics, relayed the suggestion to the Faculty meeting of 5 October 1908, the Senate approved the combination of green and gold as particularly appropriate to the new University of Alberta. The green represents the wide stretches of prairie land flanked by deep spruce forests and is symbolic of hope and optimism; the gold represents the golden harvest fields and is symbolic of the light of knowledge.

The flag is different from that on the Coat of Arms, viz: 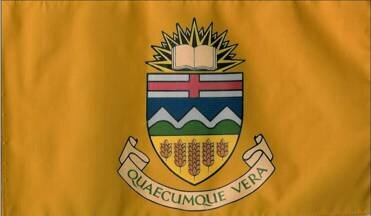