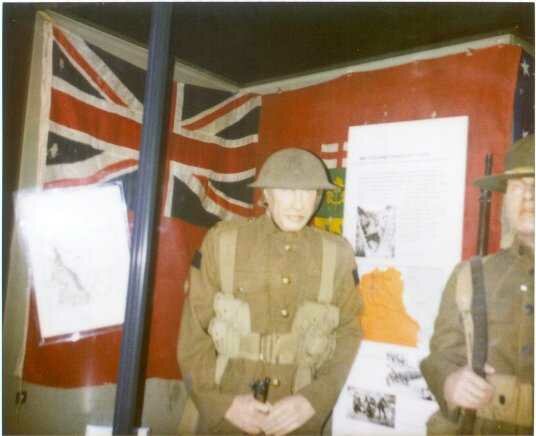 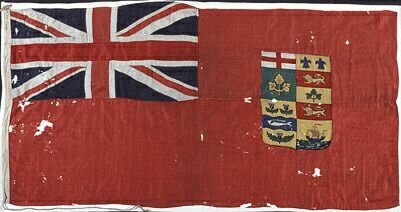 In a the quote by Former Prime Minister, Lester Pearson in "Canada's Flag - A Search for an Identity" , it is noted:: "The Red Ensign, though many of my correspondents do not seem to appreciate this, was not used during World War I in anyway, shape or form for the Canadian forces".

I have some concerns about this statement. The photo above is the flag donated to the Imperial War Museum in 1918 to commemorate the Battle of Vimy Ridge along with back-up information. The flag is a Red Ensign. Also I have seen photographs in Canadian history books covering WW1 displaying the Red Ensign with Canadian Forces. I also recently purchased a Canadian flag from a collection from an American serviceman who served with the Canadian Forces in WWI. It also is a four shield Canadian Flag. I believe this refutes the above statement and displays that the Red Ensign was used by Canadian Forces (primarily the Army) in WWI.

I believe that Lester Pearson served in the Royal Flying Corp which was entirely British, since the RCAF was not formed until 1924. The only distinctive Canadian forces that served overseas in WWI was the Army. I also believe the former Prime Minister's statement was somewhat politicized due the ongoing debate at that time versus those who wanted the new flag and those, including the Canadian Legion, who wanted to retain the Red Ensign.

The Red Ensign has served this country well both in an official and un-official capacity. For those of us born under it, we mourned its passing. The new Maple Leaf flag has served us well since 1965, but I believe the old Red Ensign deserves it fair shake for the period of time it represented this country.
Gordon Thompson, 23 May 2000

The Red Ensign was presented to this Museum in 1918 to commemorate the Canadian achievement at Vimy Ridge by Lieutenant Colonel Lorn Paulet Owen Tudor of the Saskatchewan Regiment, who commanded the 5th Canadian Infantry Battalion from 29 June 1917 to 8 March 1918.
David Penn
Keeper, Exhibits & Firearms
Imperial War Museum

The Canadian expeditionary force which fought in Vimy was a part of the 3rd British Army commanded by General Allenby. Despite their successful assault, the German front was not perforated. There is now on Vimy Ridge a big monument, known as the Vimy Canadian Memorial, which recalls the sacrifice of the 75,000 Canadian soldiers who died or disappeared in France during First World War. On the Southern part of the hill, a part of the network of the Canadian and German trenches has been restored. Concerning the city mentioned by Jarig, it must be Arras, the prefecture of department Pas-de-Calais and capital of the traditional province of Artois.
Ivan Sache, 24 May 2000