President Joseph Kabila of the Democratic Republic of Congo promulgated a new Congolese post-war constitution on 18 February 2006  which makes provision of a new flag and emblem. During a ceremony at the presidential palace in Kinshasa, February 18, 2006, the Democratic Republic of Congo adopted a new constitution aimed at bringing an end to decades of dictatorship, war and chaos in the vast country, and paving the way for elections by mid-2006. Further links are given at:
http://news.yahoo.com/news?tmpl=story&u=/060218/ids_photos_wl/r2427480279.jpg
http://news.yahoo.com/news?tmpl=story&u=/060218/ids_photos_wl/r2586210504.jpg
http://news.yahoo.com/news?tmpl=story&u=/060218/481/cod10202181822
Manuel Gabino Villascįn, 18 Feb 2006

I just heard on the news that the Democratic Republic of Congo has a new constitution. The "new" flag that was raised is the same design as that used between 1963-1971. Only the blue I believe is lighter in colour.
Johan Ockerman, 19 Feb 2006

I am wondering if new flag has same symbolism?
Nozomi Kariyasu, 19 Feb 2006

Details of the new symbols of the Democratic Republic of Congo (flag and coat of arms) are given here.  Symbols adopted on 18 February, 2006.

According to a press report here, 'The blue in the flag symbolises peace; red the blood of the country's martyrs; yellow the country's wealth; and the star a radiant future for the country.'

I just received from Mr. Roger Baert, Secrétaire de la Societas Vexillologica Belgica, information containing some constitutional texts and images showing the
first hoisting of the new Congolese flag. The flag appears with a diagonal stripe from hoist-bottom to fly-top like Brunei, not like Namibia or Tanzania.

In my opinion, this material confirms the information sent already.
Jarig Bakker, 20 Feb 2006

Article 1 of the new constitution describes the flag as follows:

I believe the article was not changed compared to the Constitutional proposal I sent a few months ago which states:
"Its emblem is the sky blue flag, adorned with a yellow star in the upper left corner and cut diagonally by a red stripe with a thin yellow frame."

From this description, it is not possible to say on which diagonal of the flag the red stripe is placed; neither is explicitly stated the location of the star regarding the red stripe.
Ivan Sache, 20 Feb 2006

According to the review of the press made by Charles Gba for the MONUC (Mission of the United Nations in Congo) on 20 February 2006, the local
newspaper "Le Palmarčs" reported that the national flag of Democratic Congo was changed, as well as the colours of the FARDC (Forces Armées  de la République Démocratique du Congo - the Army) and of the National Police.
Ivan Sache, 21 Feb 2006

After its official adoption, the new flag of the Democratic Republic of Congo was presented to the population in the provinces.  Radio Okapi (4 March 2004) reported the ceremony that took place in Bunia on Saturday, 4 March in the morning. The flag was officially hoisted by Lola Kisanga, the Governor of the Eastern Province. Then the authorities explained the meaning of the new national symbols. The Commander of the FARDC (Armed Forces), the Commander of the
National Police and the District Commissioner for Ituri were then given a national flag by the Governor.

[Bunia is located near Lake Albert, close to the border with Uganda. Ituri was one of the regions where the civil war was the most difficult to stop and I guess that the news report intends to stress that the national order has been re-established there.]
Ivan Sache, 07 Mar 2006

Amendments to the national flag 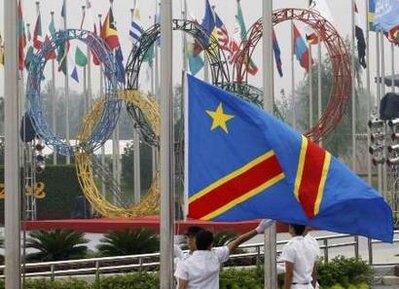 The photo above shows the DRC flag being raised at the 2008 Beijing Olympic Games.  The colours are as indicated in the Beijing 2008 Flag Manual (p. B16), with the flag being  in 2:3 ratio and having a small golden star.

This is supposedly the "correct" flag based on the brochure of the "Ceremonie de la signature et promulgation de la constitution... 18 fevrier 2006".  While the colours match that shown in the Beijing 2008 Flag Manual, the star is much larger than that seen in the flag actually raised at the 2008 Olympic Games.
Juan Manuel Gabino Villascįn, 30 May 2010

Has anyone seen detailed photos of the national flag used in the recent swearing-in ceremony of Joseph Kabila, new (and former) president of the Democratic Republic of Congo?

A press photo in the Thursday 7 Dec. 2006 issue of the freely-distributed newspaper Metro (Dutch edition) shows a detail – part of the word ‘PRESIDENT’ in yellow letters can just be made out - see photo above from the constantly changing photos on the Presidential homepage at http://www.presidentrdc.cd/accueil.html

It could be a flag made for the occasion, of course, rather than the official presidential flag.
Jan Mertens, 08 Dec 2006

Seen from another angle, yet another press photo shows the words "LE PRESI..." so there is a definite article as well.
Jan Mertens, 22 Dec 2006

Not that I am placing a huge amount of credence in news photo captions, but for whatever it is worth, several of the photos show President Kabila holding the flag while taking his oath of office, with the caption stating he is taking the oath holding the national flag [my emphasis].  If accurate, that would support the earlier conjecture that it may have been an ordinary flag especially embroidered for the occasion.
Ned Smith, 22 Dec 2006