A photograph of an actual Tibetan Flag made by Tibetan refugees is found on page 25 of Flags Through the Ages and Across the World by Whitney Smith (McGraw Hill, 1975) ; these flags were available to subscribers of the Flag Bulletin for a nominal cost at the time of the article about the Tibetan Flag and I have one. The following is from "The story of the flag of Tibet" by Prof. Pierre C. Lux-Wurm, Flag Bulletin, Vol.XII, No. 1 (Spring 1973):

... It is said that the main features of the Tibetan flag were designed in the latter half of the 7th century A.D. by King Srongtsan Gampo, ... The lion emblem first displayed as a war-banner became in time the national flag. The final consolidation of Tibetan independence brought about the addition of the rising sun and the twelve stripes of red and blue, which were introduced by the thirteenth Dalai Lama in 1912...

From another site, the details are slightly different:

The Tibetan flag was designed by the 13th Dalai-Lama in the beginning of the 20th century. It is based on the traditional flags of the Tibetan regiments. From that time, it has been the official flag of Tibet.

Here is the meaning of the symbols:

The Tibetan Flag IS illegal in the T.A.R. As is possession of a photograph of the Dalai Lama, for which the punishment is imprisonment. The PRC only refer to the former province of U'Tsang as the Tibet Autonomous Region (T.A.R.) The term "Tibet" itself refers to the three original provinces of U'Tsang, Kham and Amdo (sometimes called Greater Tibet). When the Chinese refer to Tibet, they usually mean the T.A.R., which includes only U'Tsang. Amdo and Kham were renamed by the Chinese as the province of Qinghai, and as parts of Sichuan, Gansu and Yunnan provinces, respectively.
Neil Carman, 29 October 1997

Dragonflags No. 2 (1999), a supplement of the Canadian Flag Association had a feature on the Tibetan flag, or snow mountain lion flag.

Basically, in the 7th century, under Sontsan Gambo, the Tubo kingdom was divided into 4 rus (flanks), each ru subdivided into an upper ru and a lower ru. Each ru had its own flags. Dragonflags gives the following as information, but no graphic details:

Information elsewhere in Dragonflags also indicates that there were:

These were standardized under the 13th Dalai Lama, basically creating a national standard from several military standards.
Phil Nelson, 14 November 1999

Reports of other flags seen in Tibet

I have an history book of Tibet by Laurent Deshaies, and it is said that in 1913, the Dalai Lama came back to Lhasa after a short Chinese invasion in reply to the English attempts to extend their sphere of influence. The Chinese troops were left to their fate by the old empire and then expelled from Tibet.

The new "independent" country began with creating a national army with the help of English, Russian and Japanese officers. These troops paraded with the first national flag which was "crimson with an embroidered lion", according to Alexandra David-Neel, the first westerner woman who had entered into Lhasa in 1914.
Corentin Chamboredon, 20 May 2004

In the movie "Seven Years in Tibet" there are many supposed images of Lhasa, and in many parts of the city are flown an unknown flag, probably the local flag. It is horizontally blue, yellow and red horizontal, with two white stars in the upper stripe.
Jaume Ollé, 22 January 1998

The movie "Kundun" is about the life of the fourteenth Dalai Lama. In it we see the Flag of Tibet often, but there are a few times when another flag in also shown that may be the personal flag of the Dalai Lama but I'm not sure. I've seen nothing in any of my books about such a flag and I don't really know if such a flag exists. The flag is all white with a symbol of some kind in the middle of the flag, but It is never very clear so I can't really tell much more then that.
Dan Fairbanks, 30 January 1998 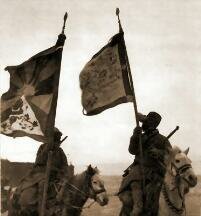 This photograph shows two horsemen, probably khampa resistance fighters. The one on the left is carrying the national flag, and the other one has what was said to be the personal banner of the dalai lama. It has a dark border, and on the field I can see several details which remind me those on the old flags of Sikkim.
Corentin Chamboredon, 17 May 2005

Although I have no confirmation of this, I have heard tell of a white flag with either one or two snow lions in the center. The snow lion is a symbol on the standard Tibetan flag, and could well be used for other banners. However, the place to inquire may well be the Tibetan Government in Exile'.
Thomas Robinson, 31 January 1998

I found a black-and-white photograph of a group of Khampa (or Khamba) guerillas, a band of Tibetans fighting the communist occupation forces in the eastern regions of Tibet. In the background is a flag, partially obscured by the soldiers. I don't know what exactly what it represents, but it looks like two crossed swords on a light background, with a dark border, with five round symbols of some kind. I'm not sure, but it looks as if at least one of the swords is surrounded by flame. There is some Tibetan writing on the right side (I can't see the left).
Thomas Robinson, 10 August 1998

(Editorial Note: a photo of this flag is in Dragonflags, No. 2 attributed to the book In exile from the Land of Snows, John F. Avedon, New York, 1984. 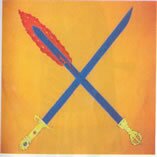 After the Chinese invasion of 1950, two resistance movements rose: the Chushi Gangdruk (four rivers, six ranges, the traditional name of Kham) and the Tensung Danglang Maggar (Volunteer Freedom Fighters for Tibet). The first one was a group of Khampa, the people who live between Tibet and China. Before 1950, there were still several kingdoms which turned Tibet against China in order to remain "independent". Those kingdoms decided that Chinese were too dangerous for them and that they must fight the Chinese.

They finally joined the Tibetan resistance essentially made up of the Tibetan army and led by Andrug Gompo Tashi. They harassed Chinese troops from the kingdom of Mustang, Nepal, with the help of the CIA until 1974 when China forced Nepal to expel them. The CIA stopped help to them because the Sino-US relations improved. Their flag was yellow with two crossed blue swords, one of them being in fire. I saw another version in a book with 4 animals on the corners and two letters on both sides of the swords. I don't know what it is.
Corentin Chamboredon, 17 May 2005

In the book "Sieben Jahre in Tibet" by Heinrich Harrer there are two photos showing the display of a huge flag at a mountain slope in Tibet.

The silk flag was displayed once a year by 60 monks. Unfortunately, it is impossible to see what the flag shows.
Marcus E.V. Schmöger, 21 October 2003

I have been told in Ladakh and Zanskar, two areas where Tibetan Buddhism is the dominant religion, that each monastery kept a huge flag rolled in a sacred room of the monastery, and displays it only in the most important religious festivals, usually once a year or even less. The prototype of such flags was kept in the biggest Tibetan monastery of China, whose name I cannot remember now, and was destroyed by the Red Guards after the invasion of Tibet. This act is still considered as one of the major sacrileges committed during the invasion.
Ivan Sache, 21 October 2003

It is a giant thangka (the usual transcription of the Tibetan word). Thangkas come in all sizes and are religious pictures on textiles, painted or appliquéd. They are hung on walls in private homes and in temples, and the large monasteries had or have giant ones for outdoor display, often on a specially built wall or screen in the hillside. Read more about them at: http://www.asianart.com/tsurphu/
Lars Roede, 22 October 2003

The word literally means "object to be unwound". The great thangkas are called "gos-sku". One of the biggest "gos-sku" dates back to the end of the XVIIth century and shows the Amitabha Buddha. It measures 55.80 x 46.81 and is kept in the Potala in Lhassa. (Source: Encyclopaedia Universalis, which has a detailed description of the stylistic evolution of the thangka through the ages).
Ivan Sache, 22 October 2003