Following the Santa Fé de Bogotá template, which is yellow over red, I reconstructed the Rafael Uribe Uribe District flag the same manner, but with the shield within the yellow band and without the Spanish description over it. I think the actual flag has no wording.
Blas Delgado Ortiz, 1 December 2001

This is probably the flag of Bogotá itself, since at http://www.galeon.com/rafaeluribe/himno.html they are asking for proposals for a hymn and a coat of arms for R.U.U.
On the other hand, they are asking for these proposals to be sent upto "viernes" June 2nd... Now, June 2nd, 2002 is a "domingo", so these pages are probably abandoned for quite a while now...
Jorge Candeias, 30 December 2001 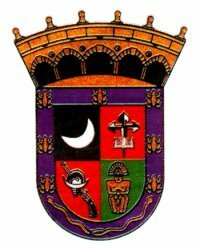