HodonŪn is a town of 28 341 inhabitants. District town in the Lower Moravian vale at the border with Slovakia, industrial, trade and banking centre of SlovŠcko. After extinction of the Great Moravian Empire the water castle in HodonŪn started to be important as a guard of local important trade route at Czech - Hungarian border. The first written reference is from 1073. The foundation charter of the town HodonŪn is from 1228 - the town belonged to the queen Constance. The town used its good location by the trade route from Germany to the Adriatic Sea and the Black Sea. Later development of the town resulted in construction of new North Ferdinandīs railway in 1841, the first railway in Austria -Hungary from Vienna to PÝerov and Silesia. At the beginning of the 20th century the Association of Moravian Fine Artists was founded. They were grouped round the painter Joĺa ŕprka. They organised many exhibitions of Moravian and Slovak artists. They initiated the House of Artists (Dým umžlcý) (now the Gallery). TomŠĻ Garrigue Masaryk, the founder of the Czechoslovak state, was born in HodonŪn. The flag of HodonŪn city is nearly identical to the flag of »esky Krumlov city, except for the shape of the rose.
Jarig Bakker, 1 May 2000 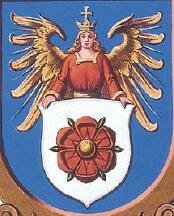 from the HodonŪn website, reported by Dov Gutterman, 6 March 2000.
Mostbet