Village history starts in 13th century. That was the time when Czech king made a present to cistercian monastery in Velehrad. It
was in 18th decembber 1250. By this act small village became a property of the monastery. And this is the first written mention
of the existence of Darkovice. Soon there apeared new village near Darkovice, called ®ibřidovice and between them the oldest pond with mill in the county of Opava. Unfortunatelly after the death of the King Přemysl Otakar II the whole situation in Czech kingdom changed. During the war time ®ibřidovice ceased to exist and number of inhabitants in Darkovice dropped rapidly.

Situation hadn´t changed till the opavian duke Mikuláą II. named king´s delegate Preąek to rebuilt Darkovice. Colonization
followed and Preąek managed to settle 14 field with new inhabitants. He received 2 fields as a reward. Darkovice were given
under the administration of the castle Landek and had to pay an annual fee. Then another opavian duke Kazimír Těąínský
attached Darkovice to Hlučín. But sons of ©těpán z Vrbna split this heritage in the year 1568. By this act, the village became
a part of possesion of Karel z Vrbna.

Against the wishes of opavian dukes Darkovice was given to Jesuits in Opava in 1673. Their task was to perform violent recatholization. During this time there lived 27 persons in servitude; from this amount were 21 peasants and 1 independent miller. A pond and farm belonged to the Jesuits. They overburndened  peasants and the result was serie of rebellions in 1734.

Village shared troubles with ©ilheřovice possesion from the 17th century. The ©ilheřovice county, as well as Darkovice were
associated to Prussia in 1742 and the servitude was abolished in 1823 ( 25 years earlier than in the rest of the Czech Kingdom).
Joy and happiness from this event was celebrated by building a chapel. Even though the village belonged to Jesuits for a long time, the school was not founded till 1867.

After affixing to ČSR, area of the village was 466 ha, there lived 989 inhabitants, there were 148 houses, 3 pubs and 2 shops.
From 1979 to 1991 was the village annexed to Hlučín, but from 1991 Darkovice have been independent again. There now live 1248 inhabitants.
Information from the Darkovice website (with slightly different flag).
Jarig Bakker, 12 Nov 2001 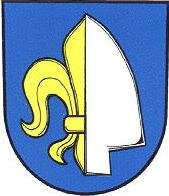