Note: The Flag of the Holy Roman Empire was not a national flag, but rather an imperial banner used by the Holy Roman Emperor. Usually a black eagle was placed on either a golden or white background. One source claimed the gold field was for the Emperor's flag, and the white field for the Empire's flag.

On this page: See also:

Before 1815, there was no state called Germany, in the sense we now use. There was the Holy Roman Empire, with a ruler called the Roman Emperor, which claimed in principle to be the continuation of the Roman Empire and ruled basically all of what is now Germany, as well as pieces of Italy, Austria, the Low Countries [now Belgium and the Netherlands] and a few more. Intermittently earlier and continuously after around 1400, one of the emperor's titles was King of Germany, but this does not mean there was anything like a German government. There was an Imperial Court and an Imperial Chancellory, but except in Imperial cities like Frankfurt, the authority of the Emperor was to a great extent dependent on the cooperation of the territorial princes.
Increasingly, the separate territories of the Empire acquired their own flags. More significantly, after 1500, the Emperor was always an Austrian Hapsburg and the always limited in power and authority behind the policy and power of Austria.
With Napoleon's forced dissolution of the Empire in 1806, the story changes. The Emperor became Emperor of Austria (he was previously Archduke of Austria, but as I mentioned Imperial policy had pretty much become Austrian anyway) and many of the imperial insignia became, with minor changes, Austrian.
Norman Martin, 14 January 1998

Starting around the 14th century, the Empire had a diet called the Reichstag (early it had a somewhat similar gathering called the Hofstag). Although it never had the power to adopt, as opposed to proposing, it had considerable de facto authority during the late middle ages. During and after the 30 Years War, it basically lost most of its power. It had something over 200 members (called Reichstände) which were princes, bishops or Imperial cities. The last completely regular Reichstag was in the mid 17th century. The following one, the Reichstag of 1663 did not adjourn until the abolition of the Empire in 1806. Despite appearances, this was accompanied by increasing irrelevance of the institution although it continued meeting irregularly in Regensburg [Bavaria]. With the foundation of the German League, its diet which consisted of the princes was named the Bundestag.
Norman Martin, 5 October 2000

The Reichssturmfahne was not a flag, but a banner. Meyer's Lexikon of 1897 says s. v. Banner: "On the German Imperial Banner, which the Emperor or the supreme commander appointed by him mounted, when assembling the Imperial army, was depicted at the time of Henry I and Otto the Great the archangel Michael, at the time of Frederic I (Barbarossa) an eagle, in the time of Otto IV an eagle hovering over a dragon, since the time of Sigmund, and perhaps earlier, the Imperial eagle; that was a black eagle in yellow, bearing the arms of the Emperors house on it's breast.
When investing a fief, the Emperor had together with this Imperial banner in black and yellow a second banner in red for the investion with penal judicature. This is probably the reason of combining the colours black, red and yellow to form a tricolor against the rules of heraldry...The Reichssturmfahne was smaller than the Imperial banner, more like a chaffron..."
Since this Reichssturmfahne was part of the arms of the Duchy of Wuerttemberg since 1495 and of the royal house of Wuerttemberg up to 1918, we have 19th century pictures of it.
I don't think it wise to have the Holy Roman Empire sub GERMANY, since the Empire was an supranational entity, Germany being only the most important of its successor states. These successor states are in full: Germany, the Czech Republic, Austria, Liechtenstein, Switzerland (independent since 1648), Italy (except the southern parts), San Marino, Monaco, Luxemburg, Belgium and the Netherlands (independent since 1648).
Big parts of the Empire belong now to France and Poland, small parts to Slovenia and Croatia. Mark: East and West Prussia as well as Venice where not part of the Empire. That means, in the late middle ages it embraced all territory between the Rhone , Saone and Maas (Meuse) in the west to the Oder valley in the East, and from Holstein in the North to Tuscany in the south.
Legally there was no GERMANY and no King of Germany. Even the title German King was very rarely used. The official title was up to the 11th century Rex Francorum (King of the Francs) and later Rex Romanorum (King of the Romans). The latter title was used in the interval between election and coronation at Rome or for sons of an Emperor, when they were elected kings in their fahthers lifetime. Because the German king was in fact Rex Francorum, he was elected by the peoples of the eastern part of the Kingdom of the Francs, living in the dukedoms of Eastern Franconia, Frisia, Saxonia, Thuringia, Bavaria, Alemannia (Suebia) and Bohemia. Later they were represented by the seven princely electors, one of which was the King of Bohemia.
As an example: Karl IV, duke of Luxemburg and King of Bohemia, educated at the court of the of French king, was elected king in 1346 at Rhens and crowned king at Bonn (again in 1349 at the correct place Aachen/Aix). By this act he was legally king of Italy and Burgundy and had the right to be crowned Emperor at Rome. 1355 he was crowned as king of Italy in Milano and as Roman Emperor at Rome, 1365 as king of Burgundy at Arles (Provence). Since 1508 the Imperial title was Elected Roman Emperor. The only place of coronation was in modern times Aachen.
Organs of the Empire were the Emperor, the Electors, the Reichstag (diet), and since about 1520 the Imperial circles. The circles were responsible for defence, trunk roads, and other things of common interest. The Reichstag had is sessions from 1594 at Regensburg and was permanent since 1664. The states (Stände) were then represented by commissioners. Hereditary Imperial commissioner was the Prince of Thurn and Taxis, better known to the public as Imperial postmaster general.
The circles had diets of their own. At the Reichtsag Italian states were not represented, but in modern times some Burgundianstates (Duchy of Savoya, Archbishop and Imperial City of Besançon, Principality of Mombeliard etc.).
The cross was a common symbol of Christian states, and especially of the Holy Empire. The Meyer says: "The banner of the Holy Empire bore a cross even before 1200; it is the st. George's banner... Emperor Friedrich III took the cross officially as part of the Imperial arms, but some of his successors did not use it." So you can find the cross on thousands of pictures. Most Imperial cities had it in their arms. So it was quite normal for the Imperial city of Genova to use it (see Genoa).
A. Birken, 22 Aug 2002

Nevertheless the Emperor had a banner, consisting of a black eagle, armed red, generally on a gold (yellow) field. Sometimes the same eagle is portrayed on a white field; a flag chart early in the 18th century has the yellow flag as the flag of the emperor and the white one as that of the empire, but it is uncertain as to whether this represents a real distinction. After 1400, the eagle became two-headed; possibly this reflected the practice of the defunct Byzantine Empire, their main competitor to the claim to being the Roman Empire. Increasingly, but not uniformly, the eagle acquired a sword and orb, as well as a crown. The coat of arms, but rarely the banner, also sometimes had a red border. A good representation of the early pattern can be found in Crampton 1990. I found some nice 15th century representations in a small book called Kaiser Heinrichs Romfahrt (Emperor Henry's Pilgrimage), published in Koblenz in 1895; Smith 1975 has one of these illustrations on p.114.
Norman Martin, 14 Jan 1998

[Also see the Roman Emperor's Banner at top of this page.]

The history of the Holy Roman Empire begins not 962 under the reign of Otto I (the Great), it starts with the imperial coronation of Charlemagne on 25 December 800 at Rome. From 800 until 1165 the name of the empire was only "Roman Empire" (Imperium Romanum) as a restoration of the ancient Roman Empire. From 1165 until 1486 the state name was "Holy Roman Empire" (Sacrum Romanorum Imperium), or "Holy Empire of the Romans," because on 29 December 1165, Charlemagne was declared "holy" by the Pope Paschalis III. Since Maximilian I (1486-1519) until 6 August 1806, the state name was the "Holy Roman Empire of German Nation" (Sacrum Romanorum Imperium Nationis Germanicae), or the "Holy Empire of the Romans by German Nation." In the German language it is Heiliges Reich der Römer Deutscher Nation, or in the shorter version: Heiliges Römisches Reich Deutscher Nation).
Erwin Hoheisel, 29 Aug 2007

Note: In 1401, a double-headed eagle replaced the single-headed eagle on the Imperial Banner of the Holy Roman Emperor. Described as: "Double-headed imperial eagle displayed with a halo sable armed and langued gules." There were two versions, one with haloes and one without.

Image by Albrecht Altdorfer, 26 June 2010
Banner of the Holy Roman Empire, with the arms of Austria

Note: In 1437, an escutcheon of the coat-of-arms of Frederick III was added to the Imperial banner.

Note: This variant version, without an escutcheon, has a sword, sceptre and imperial crown added, but no haloes. The Imperial banners reportedly sometimes had a red border.

Note: In 1519, the escutcheon with the coat-of-arms of Maximilian I was replaced with that of Charles V on the Imperial Banner,

This is the flag of Emperor Karl VI (1711-1740), a kin of Habsburgs. It is a horizontal 11-stripes flag with alternating blue yellow and white stripes of equal width. The double headed black eagle, which is topped by a golden crown is superimposing the stripes and shifted to the hoist. Source: Jörg M. Hormann and  Dominik Plaschke: "Deutsche Flaggen: Geschichte – Tradition – Verwendung", ISBN 3-89225-555-5, p.18
Klaus-Michael Schneider, 15 Aug 2008

Please add as primary source: [sig12] either flagchart 18 row 1 column 2 or flagchart 42 row 4 column 1 (flags have no numbers; therefore I have ordered them by position). The flag is depicted in both flagcharts. The latter is the better.
Klaus-Michael Schneider, 10 Sep 2008

The Imperial City of Nuremberg is located today in the German state of Bavaria. it is located about 105 miles north of Munich. Nuremberg was often referred to as the "unofficial capital" of the Holy Roman Empire, because the Reichstage (Imperial Diets) and courts met at Nuremberg Castle. In 1219, Frederick II granted a "Great Letter of Freedom" (Großen Freiheitsbrief), to Nuremberg which gave the town rights to mint their own coins and collect their own customs fees. Nuremberg soon became, with Augsburg, one of the two great trade centers on the route from Italy to Northern Europe.
Memmingen is a town in the Bavarian region of Swabia in Germany. It is the central economic, educational and administrative center in the Danube-Iller region.
Edited Text from Wikipedia 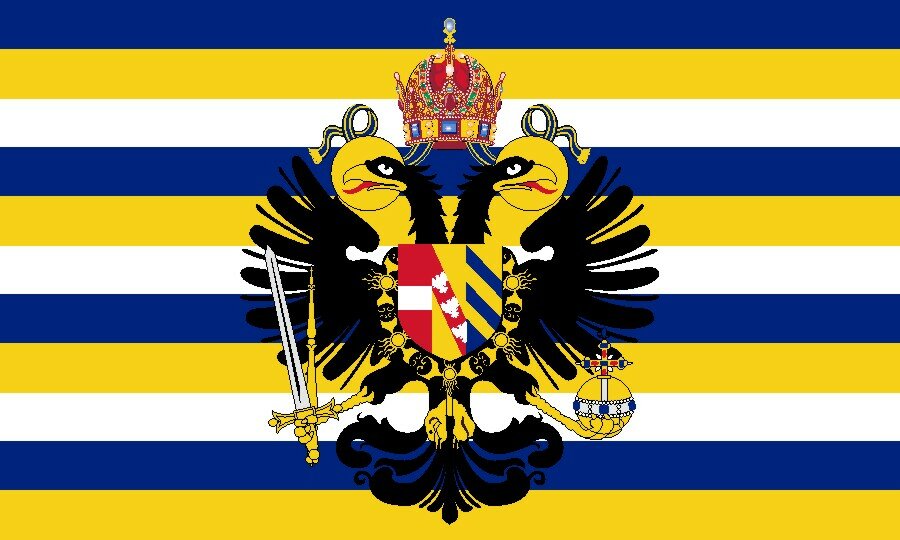