Feldmühle is the firm which took over the Koholyt shipping company in 1930.  Feldmühle is a very well-known name in paper production, see this webpage and following pages.

What I had not seen right away was the company’s very own house flag, also shown in the 1928 Flaggenbuch, part II, no. 424 (page 42/99).
National colours of that period i.e. black-white-red: quarterly divided black (top, bottom) and white (left, right); a large white disk in the centre - enclosed by a red rim - bearing a black letter ‘F’ (no serifs).
Caption: Feldmühle, Papier- und Zellstoffwerke Aktiengesellschaft (i.e. Feldmühle, Paper and Cellulose Factories Co. Ltd), Stettin.
For the moment I do not know when shipping activities started nor when they were stopped.
Jan Mertens, 23 Mar 2008 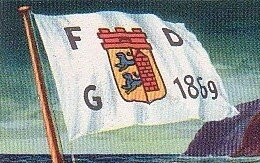 Difficult to decipher as the original image is – the local shipping museum in  Flensburg confirmed the design ('Flensburger Dampfschiffahrt Gesellschaft' or Flensburg Steam Shipping Co.)– what we really needed was an image such as the above.
Still on offer at Beste Auktion (German auction site), it has a page of its own: identifying it as belonging to ‘Lloyd Reedereiflaggen der Welthandelsflotte’ (i.e. Lloyd shipping company flags of the world’s merchant fleet) published by Brinkmann’s cigarette factory, Bremen, in 1932 (album).

So the house flag is white with black initials FDG and the year 1869 in the corners, the Flensburg city arms – with mural crown – in the centre.  In the image found by Jorge the initials and year were put right into the flag’s corners and so did Lloyds 1912.  After WWI – if we may believe the later images – these were more evenly distributed.
Jan Mertens, 24 Sep 2006

Flensburger Schiffsparten-Vereinigung  AG (FSV) c/o Uwe C. Hansen Befrachtungskontor.
The company is located in Flensburg and was established by Heinrich Schmidt on 14 December 1904. In order to match conditions due to German law the partners of Schmidt, mostly foreigners, had to merge in one new company. Schmidt and his son Heinrich Wilhelm became general managers.
At the end of WWI all ships had gone lost. Heinrich Schmidt died the same year and his sons Hans and Carl became members of the board and the company was successively rebuilt. The company increased from 1925 to 1928, but until 1934 non profitable ships were abolished. After both sons had died, Dr. Kähler became general manager. The last three ships got lost at the end of WWII. Main shareholder was Greta Korn, Schmidt’s widow. With help of her son in law Uwe C. Hansen the company was rebuilt again and since 1951 many new ships were acquired. In 1987 there was a successful partnership with “Hapag-Lloyd”. The same time Hansen established “Baltic Bereederungs GmbH” together with “Flensburger Fahrgastreederei Seetouristik”.
In 1989 Greta Korn died. Uwe C. Hansen resigned in 1990 and delivered the company to his son Claus-Otto Hansen.
FSV, today „Uwe C. Hansen Befrachtungskontor” and “Baltic Bereederungs GmbH” still exist.
“Seetouristik” merged with “Förde Reederei” forming the new company FRS.
Source: Klaus-Peter Bühne; translated by Klaus-Michael Schneider.
Description of flag: The flag is divided per saltire into blue (top), red (bottom) and white. The colours are the colours of Schleswig-Holstein.
Source: “Deutsche Reedereien und ihre Erkennungszeichen”; 2nd ed.; Hamburg; 1956; p.18.
Klaus-Michael Schneider, 15 May 2009

This time, the flag is blue with a red cross pattée. The caption seems to read something in the lines of "Reuse Sirt Dampf Ge.", but this includes, again, a huge dose of imagination.
Jorge Candeias, 6 May 2004

Fluß-Schiffahrts-Kontor Hamburg
It is a 5-striped flag with 5 horizontal alternating celestial blue and white stripes. The third at the hoist is checkered of the same colours with a white canton having black capitals “FSK”.
The flag was identified with help from J. Nüsse.
Source: I spotted this flag at Billwerder Bucht in Hamburg on 30 April 2007
Klaus-Michael Schneider, 7 Mar 2009

When Claus Friedemann and some business partners founded the firm in 1953, they wanted to provide a successor to the ‘Elbe-Schiffarts-Kontor’, the fleet of which was owned by Deutsche Maizena-Werke (in its turn owned by US company, Corn Products) but sold to Rhenania. Local offices were established in Berlin and Duisburg, the latter being FSK’s seat from 1960 on (moved to Hamburg in 1995).  The well-known German logistics firm ‘Kühne & Nagel’ took over 25% of the shares in 1998.  Five years later FSK took over most of ‘Peute Reederei’.

I would have expected that the house flag’s drawing was a faithful rendition. The basis of the flag are five horizontal stripes BWBWB, with one third of the flag, near the hoist, taken up by a white canton bearing black initials ‘FSK’ (no serifs), height two horizontal stripes, and the rest of this area chequered blue and white, starting with blue, height three horizontal stripes. There is a visible difference to the drawing as its initialled and checkered part takes up well-nigh half of the flag.  Luckily… where else but on German eBay would above flag photo have appeared…  It was offered by “lz530”, item no. 330041623154, end 31 October 2006, dimensions given as  0,90 m by 1,50 m.
Jan Mertens, 5 Jul 2007

Georg Freymann
The company was located in Hamburg. It is a black flag with a white company logo in its centre. The logo consists of white connected Gothic initials “GF”. Having a load of a little bit of phantasy, you could imagine a ship with a big funnel exhausting steam.
Source:  “Deutsche Reedereien und ihre Erkennungszeichen”; 2nd ed.; Hamburg; 1956; p.19.
Klaus-Michael Schneider, 11 Apr 2009

Some details from the ‘History’ section: founded in 1921 by Johann and Wilhelm Friedrich at Kiel; fourth generation family business always carried on, remarkably, by successive daughters putting their husbands at work in the firm. Present entrepreneur Klaus Birr, leading a work force of about sixty employees, has compensated for diminishing official building programmes and subsidizing of former GDR yards by intensive follow-up and cost saving measures based on sound ecological principles.

Shown on the site is a drawing of the house flag: white triangle based on the hoist and touching the fly, upper triangle blue, lower triangle red; in the white field, serifed and italic blue initials ‘GF’ to the right of which are placed three thin wavy lines in blue. I have not yet found any photos showing this flag but a German eBay offer, now closed, showed what seems to be a forerunner. The difference mainly consists in the initials being without serifs and partly enclosed in an open box shape, slanted as the intials are and vaguely recalling a ship’s bow.  (Item no. 120072677330 offered by our friend “vexillologe”, end of offer 14 Jan 2007, dimensions of table flag given as 15 cm x 24 cm.)
Jan Mertens, 17 Aug 2007

Reederei Herhard Frommann und Söhne GBR: Light blue with a white cross throughout fimbriated black. A white square lozenge fimbriated black in the center of the cross with the letter 'F' in black.
Jorge Candeias, 13 Mar 1999