Although I don't think it has any official status, it is seen in a number of places in the region, particularly flying over businesses in the tourist industry (often alongside the British, English and European flags).
Ken Bagnall, 16 January 2001

The flag is evidently manufactured, with a slightly different design than shown on the gif from Ken Bagnall. One web site shows a photo of the flags, in two different shades of blue. You can see a photo on http://www.white-rose-international.com/flag.htm.
Helge Jacobsen, 22 January 2001

My understanding was always that the Yorkshire rose 'sat' on two point not one - therefore Ken Bagnall's flag is upside down.
Richard Carter, 20 April 2003

Well, there is certainly some kind of 'urban legend' that a Yorkshire rose rests on one point, so that (some of) the lines between the petals form a letter Y for Yorkshire. I've never been able to trace the origins of this. Certainly, all the roses in the arms of the three Ridings are 'conventional' with the roses resting on two points. However, the roses on the Yorkshire Ridings Society (self-appointed guardians of Yorkshire heritage) do have the roses resting on one point on their home page at http://www.yorkshire-ridings.org.uk.
Ian Sumner, 21 April 2003

The White Rose has been a symbol of Yorkshire since the War of the Roses between Lancaster and York in the 1400's. The Yorkists of the time were represented by the white rose.
Patrick Costa, 27 July 2001

On August 1st, 1759, soldiers from Yorkshire regiments who had fought in the battle of Minden, in Germany, picked white roses from bushes near to the battlefields as a tribute to their fallen comrades. Since that time the white rose has become the symbol of Yorkshire and is proudly worn by Yorkshiremen and women on Yorkshire Day (August 1).
David Stretton, 9 July 2001

I have been trying to verify the why, when, and how the White Rose was adopted as a county badge for the county of Yorkshire. I note with interest your proposition that it dates from the battle of Minden 1759, can this be verified in any way please. I had started to wonder if it was actually simply a fable as the heraldic links with the Wars of the Roses never was a real contender for all the reasons I am sure you are well aware of.
Richard Hayton, 20 February 2002

In UK heraldry, if I am not mistaken, a "house" (i.e., a family and its retainers and servants and distant relatives and whatnot) has not only various coats of arms but a "badge". For a royal house (or would-be-royal house) the badge can extend to the entire country, such as the Scottish thistle or Irish shamrock, Welsh leek. Somehow the House of York (a subdivision of the British - then English-only - royal house) acquired a white rose as its badge (it does not, I don't think, appear on any coat of arms) and the House of Lancaster had a red rose. Hence their internecine wars were called the "Wars of the Roses". When the dust settled at the end of the wars the badges were merged into the "Tudor rose" which serves as the badge of England
today.

The two houses, Lancaster and York, no longer exist (do they?). Now the question here, as I understand it, is how the family badge of the house of York became the county badge of Yorkshire. To me the reason is obvious; Yorkshire simply adopted it from the family badge. As to the date and manner of the adoption, indeed whether it was an official act with an actual date or a gradual act over time, is an interesting question.
Al Kirsch, 20 February 2002

The Houses of York and Lancaster still exist in that they are subsumed into the House of Windsor. HM The Queen is Duke of Lancaster and HRH Prince Andrew is Duke of York. The badge of York Herald is a white rose "en soleil" (ie with a sunburst behind it).
Graham Bartram, 20 February 2002

There is also a Lancaster Herald whose badge is a red rose royally crowned - see www.college-of-arms.gov.uk/about/6.htm
Joe McMillan, 20 February 2002

A picture from York shows a shield in a coat of arms high over a gate. So, I theorized that the flag should be a banner of arms and constructed this one out of the England flag. Has anyone see this flag? Is its ratio 2:1? Should the lions be nearer to
each other?
Blas Delgado Ortiz, 7 February 2002

This shield is abundantly seen around the City of York - it was visible on the city wall, and on the bridge over the River Ouse.  During the International Vexillogical Congress in York [in 2001] the flag as Blas has drawn it was flying high from the Guild Hall, although I am not sure if it was 2:1 or not.
Rob Raeside, 8 February 2002

Dewsbury is a town in West Yorkshire, northern England, with around 60,000 inhabitants. Legend has it that St Paulinus, the "Apostle of the North" preached at
Dewsbury in 627 after being sent by the Pope to Christianize the kingdom of Northumbria. A monastery was established and Dewsbury became a the centre of a huge parish stretching over 400 km2. It became a royal manor and stayed that way until the Norman conquest. Legendary outlaw Robin Hood is said to be buried in the grounds of Kirklees Priory, which lay in the parish of Dewsbury.

Dewsbury was a small village until the beginning of the nineteenth century. It built its fortune on the textile industry and following the industrial revolution became the thriving centre of the heavy woollen industry, exporting cloth and blankets throughout the world. One of its most famous wares was "shoddy" cloth, which was made from a mixture of wool and torn-up rags. Much of the clothes it produced were cheap and, some said, of inferior quality: hence the later pejorative meaning of the word "shoddy". The textile industry declined after the first world war. Among famous Dewsburians are Betty Boothroyd, the first female speaker of the UK House of Commons; Patrick Stewart, actor who appeared in Star Trek and the X-Men; Charlotte Bronte, author who based Jayne Eyre on her experiences of teaching in the town; and Tom Kilburn, inventor of the modern computer.

The flag of Dewsbury is based on the town's coat of arms, which were granted following Dewsbury's incorporation as a municipal borough in 1862. The blue and yellow checks are from the coat of arms of the de Warenne family. The Warennes came over with William the Conqueror after the Normans defeated the English at the Battle of Hastings in 1066. They were created earls of Sussex and were granted patches of land throughout the country, including the manor of Dewsbury. The two owls are taken from the coat of arms of the Savile family. The Saviles have owned a great deal of land in the town since the middle ages: their hall was at Thornhill in the south of the town until the civil war, when it was blown up by accident. They are still major landowners. The cross is from the arms of the Copley family, another large landowner in the area. The head of the family is the Earl of Wilton.
Ivan Sache, 9 November 2004

This new flag for the English region of Yorkshire was designed by Michael Faul, Director of the Flag Institute.  It shows the cross of St. George, the historic symbol of England, with the vertical band off-centre to the left, in the format adopted by most Scandinavian countries. This reflects the fact that Yorkshire is part of England, but also that it has close ties with Scandinavia, having been settled and ruled by Norwegians and Danes in the eighth and ninth centuries. The white rose is shown on a blazing sun, called "rose-en-soleil" in heraldry, which is the Royal badge of the Royal house of York, the last member of which to rule England was Richard III (1483-1485). The new flag has been adopted by the Campaign for Yorkshire which is campaigning for a Yorkshire parliament.

You may be interested to know that the Yorkshire Dialect Society has adopted this flag and uses it as the masthead on its website. The Campaign for Yorkshire has also expressed interest in "officially" adopting it as the flag for the whole of historic Yorkshire (but has not yet actually done so). The centre of the rose is yellow, for the pollen stamens. 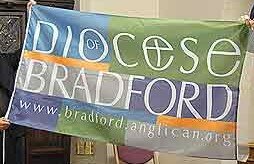 At the www.bradford.anglican.org web page is a photo of a flag of the Diocese of Bradford, Church of England [scroll down about 1/3 of the way] Interestingly it does not make use of either the St. George's Cross or the diocesan arms.