It is uncertain if the white horse flag is actually used as such.  If so, it would be a banner of arms, and may contain the word "INVICTA" below it.  The Kent County Council uses the white horse on its logo:

This logo has the white horse of Kent, but I have a feeling that the Invicta flag is simply a banner of the county's arms, i.e., a white horse on dark red (certainly far darker than on the KCC logo!).
James Dignan, 10 June 2004

The white horse of Kent appears on the burgees and ensigns of the Medway Cruising Club and the Medway Yacht Club.
David Prothero, 10 June 2004

There is an illustration of the flag of Kent on page 63 of Bartram (2004). The horse is very definitely upright, like a circus horse rearing, and is offset towards the hoist.
Graham Bartram, 10 June 2004

This flag is very definitely flown (occasionally, still) from County Hall in Maidstone. Until the new Logo was adopted (?1990s) the heraldic banner was the only flag used by the County Council and flew daily from County Hall. It does NOT have the "Invicta" motto beneath the Horse. The grant of arms was made to Kent County Council in the 1930's, and the first flag caused a little controversy due to its red colour. It was presented by a local  Labour MP, who was suspected of making a Socialist statement.

The position of the horse on the arms, logo and flag is indeed "rampant" , that is, rearing on one hind legs -- but this version dates only from the 1930's Grant of Arms. Earlier versions depict the Horse as forcené (i.e. rearing naturally on its hind legs) or occasionally courant (running). Some 19th century versions
show the background colour as blue, and there is sometimes a green strip of turf below.

The "Invicta" motto is associated with the story of the Treaty of Swanscombe in 1067: according to local legend, William the Bastard, having seized the English throne, was travelling to Dover when he was met by the Cantware (the People of Kent). They demanded from him their ancient laws and rights, in which case he would have their loyalty, or else "battle most deadly". William granted the request, and Kent acceded to his reign by treaty, hence getting the motto "Invicta"
(unconquered). I have lived in Kent all my life, and can vouch for the fact that William is never styled "Conqueror" by anyone native to the County.
Karl Wittwer, 24 July 2004 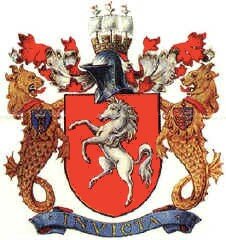 The arms were granted on 17 October 1933 and re-confirmed in 1975. The white horse of Kent is supposedly the old symbol for the Saxon kingdom of Kent, dating from the 6 - 8th century.

The crest shows a mural crown, which symbolizes the many castles in the county, as well as the independent Saxon kingdom of Kent. The sails are symbols for the strong ties of the county with the sea and stand for the navy, the mercantile marine and fisheries. The sea lions are also a symbol for the strong ties with the navy, the lion being the British lion. The sea lions also symbolize that Kent is the frontier of Britain with continental Europe. The left supporter wears the arms of the Cinque Ports, five harbour cities that had to provide support for the English navy until modern times. Four of these cities are in Kent. The arms are three lions with ship hulls as tails.The right supporter wears a shield with the arms of the Archbishopric of Canterbury, founded in 597 by St. Augustine.

The badges of some British regiments had a white horse that was not derived from the arms of Hanover:

These are all regiments associated with the County of Kent, one of the Saxon kingdoms supposed to have been founded by Hengist and Horsa. He was actually one person, but known as Hengist by the Frisians and Horsa by the Anglians - both words meaning 'horse'. The badge of Kent is a prancing white horse.

The flag to be flown in the diocese of Rochester is the flag of St George with, in the canton, a shield of the arms: Argent on a saltire gules an escallop or.

Admiral of the Medway

The Admiralty replied that the title Admiral of the Medway did not confer the right to the proposed flag, which would contravene the Order in Council of 9 July 1864, that abolished Royal Navy Squadron Colours, and established the design of the flags of naval admirals. The Town Clerk then asked if the Mayor could continue to fly a plain St George's flag, something he had done for many years. At that time Chatham, which is along the river adjacent to Rochester, was a major naval dockyard port, so, not unsurprisingly, the Admiralty refused this request. [National Archives (PRO) ADM 1/8744/138]

At http://www.doverport.co.uk/index.asp is a logo of this port that looks like a flag - white-blue-white (1:4:2) with canton half way with three boats.
Dov Gutterman, 21 October 2003

The canton is the arms of the Cinque Ports: per pale gules and azure three lions passant guardant dimidiated and conjoined to the hulks of as many ancient ships all in pale or. Dover was one of the principal members of the Cinque Ports organisation (something similar to the German Hansa towns, although not as powerful). Dover Council does not fly a flag of its own.
Ian Sumner, 22 October 2003