There is, apparently, an official flag for Lancashire, but am reasonably certain that the one described above is not it. I have no background so cannot confirm that this is the design, but the one of which I am aware consists of three gold triangles (two upright and one reversed) on a red field, with three red roses one in the centre of each triangle. I have the definite feeling that the red rose on white described by James is actually a commercial venture, and despite what he was told the only flag I have ever seen flying from the County Hall in Preston is the Union Jack?
Christopher Southworth, 11 February 2006

This flag as described by Christopher would be a banner of arms of Lancashire County Council.
Laurence Jones, 12 February 2006

Lancashire seems to have followed the tracks of Yorkshire [in having a flag recorded by the UK Flag Registry], but with less presence in the media. In the "Lancashire Evening Post", 29 July 2008, Chris Visser reported the registration of the new flag of Lancashire with the Flag Institute:
"The traditional red rose of Lancashire has turned yellow for the 21st century. For the first time, Lancastrians can wave this county flag ... without having to get planning permission first. But as the Scottish town of Montrose had already registered a flag with a red rose and white background, Lancashire has had to brighten things up. This new design has now officially been registered with the Flag Institute – meaning proud Lancastrians are free to wave it at will. Chris Dawson, chairman of the Friends of Real Lancashire, which registered the flag, said: "The Lancashire coat of arms is yellow and red, so the yellow seemed to be an appropriate colour. "It seems to have been favourably accepted by everyone who has seen it. I think it will show up better than the white, which often clashes against the clouds. We'd like to see everybody flying the Lancashire flag. We want to see it on public buildings."

The Flag Institute's chief flag expert, or vexillologist, Graham Bartram said: "One of our rules is that you can't have two flags which are the same, so we suggested that they modify the background. "It's quite a striking flag and we did research to make sure it was a Lancashire rose. The middle sepal on the Lancashire rose points upwards but downwards on the Yorkshire rose.""
Source: http://www.lep.co.uk/news/Lancashire-flag-is-all-yellow.4333614.jp

The flag is yellow, divided with a kind of red W and with the two outer sectors red and a rose in each of the three yellow sectors.
Ivan Sache, 31 July 2008

The emblem of Lancashire is the red rose, in contrast to the white rose of Yorkshire. However, this emblem does not seem to have been used on a flag.  The red rose was originally a symbol of Lancaster, and seems to have been invented by Henry VII.  He however used the combined "Tudor Rose", so the red rose alone would never have been used.
Nathan Lamm, 9 September 2002

There is indeed a Lancashire flag: a red rose on a white background [see illustration at http://www.worldofflags.co.uk - ed. ]. It can be seen flying from some businesses (e.g. the Lancashire House Hotel, where I stay when I'm visiting Lancaster University), and can be purchased from a number of flag vendors online. I'm told by several locals that it flies from Preston County Hall, but I haven't yet confirmed this myself; eventually I'll try to get a photo which will confirm semi-official status.
James Sterbenz, 11 February 2006

I have seen a flag depicting the Lancashire rose flying outside what used to be the office block for Leyland Motors known as Lancaster House. It used to be flown alongside the Leyland Motors company logo flag at the front of the building. However since Leyland Motors closed down some years ago, and the building premises were taken over by Enterprise plc, I have seen no flag(s) flying from that particular mast.
A member from the Leyland forums kindly sent me a picture of what I believe to be the flag that was sometimes flown from outside Lancaster House. I am familiar with the flag, the Red Rose had 5 equally spaced sepals with the 'pointer' sepal orientated face down on the flag, on a white background. I was also interested to notice that the orientation of the rose sepals on the flag was the same as that which is depicted on its counterpart the Yorkshire flag. I cannot confirm whether this flag is official, my guess is that it will be as official as the Yorkshire counterpart.
Kevin Lea, 4 December 2007

Based on this web page, http://www.lancaster.gov.uk, it is clear this flag is a banner of arms.
Laurence Jones, 28 July 2007

It seems that Liverpool has no flag. The arms are a gold liverbird bearing an olive branch in its mouth on an argent field.
Source: Ensign & Jack #8
Jaume Ollé, 24 January 2001

Carr, 1961, says "Liverpool's arms date from 1797, when the heralds, having never heard of Litherland close by, were left to choose between the pool of laver - that is, the seaweed Porphyra - and the pool of the liver, a bird unknown to naturalists; and, failing to find a figure of the imaginary bird, they invented a sort of short-necked cormorant, into whose beak they put a couple of fronds of Porphyra in case it was Liverpool after all. This very neat instance of heraldic hedging did not, however, meet with the success it deserved, for the old name was discovered to be Litherpool - that is, the sluggish pool - yet the cormorant and the seaweed remain, for they are in the grant."
Carr therefore suggests that cities may use banners of arms..
Jarig Bakker, 2 April 2002 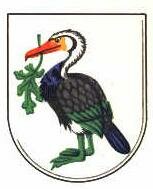 It is a cormorant on the arms of Liverpool. It was inspired by an American flag with a bald eagle on it, and developed with a hint of the famous Liverpool humour. The "liver birds" are Oliver and Olivia - she looking out to sea waiting for her true love to return, he looking into the city to see if the pubs are open!
Valerie Sullivan, 16 June 2004

The late Fritz Spiegl, who was an authority on all things Liverpudlian (and who wrote a four volume series entitled 'Lern Yersel Scouse' under the pseudonym Linacre Lane), claimed that the Liver Bird was based on a pelican, the local artist who was commissioned to draw the bird (a) had never seen one and (b) was drunk at the time.
Ron Lahav, 18 April 2005

Concerning the Liverbird, I can't believe people think the Liverbird is a cormorant. I felt the need, being from Liverpool myself and being very proud of my city, to set the record straight. The original seal of Liverpool was based on the heraldic emblem of King John, which was an eagle. The original seal was broken some time during Liverpool's history and when the new seal was created the artist couldn't quite render the eagle as well as the original, so it came to look something like a cormorant.
Neil Evans, 7 May 2006

The web page at http://myweb.tiscali.co.uk/prestonian/preston.htm reports along with some other information about the city:

"The "PP" in the coat of arms is said by locals to stand for Proud Preston or Preston - Priest's town, this may be because of the historic association of the church and town and certainly in the coat of arms or seal it was originally a standing lamb with banner flag - the emblem of St. Wilfrid. When the parish church changed its name to St. John in Tudor times, the pragmatic townsmen sat the lamb down and it became the emblem of St. John the Baptist. It was the wrong St. John, but they probably thought it would be standing up again soon! With regard to the 'PP' in the coat of arms it is also said it may stand for Princeps Pacis, Prince of Peace or Preston-Preston. In 1376 there were no Ps in the town seal; in 1402 there were three Ps arranged decoratively on either side and below the standing lamb. In later times one of the Ps was lost and the other two ended up below the seated lamb."
James Dignan, 14 September 2007

It has to be said that the white Paschal lamb on a blue field is almost certainly several hundred years old (if not early medieval). The shield displayed on a white ground is, however, new to me, because for at least forty years or so the flag of Preston Borough Council (not often flown) was a banner of arms i.e., a white Paschal lamb on a blue field with PP in gold below. Local tradition, by the way, says that "PP" stands for Proud Preston, but it is not impossible that it does stand (or originally stood) for Prince of Peace. It is also worth remarking that the blue that I have often seen used is much darker than that shown on the image here, but I will try to confirm current practice in the next day or so.
Christopher Southworth, 12 November 2007

I have spoken this morning to His Worship the Mayor of Preston, and he confirms that the City (from any of its offices) no longer flies a flag of its own. He is also unaware of any flag showing a shield on a white ground, that the only flag he knows about is a banner of the town's arms which was occasionally used formerly but which has now been retired (following the Prime Minister's recent request [to make greater use of the Union Flag]) and the Union Flag flown in its place. The Council "replaces the Union Flag with the Flag of St George on St George's day and the camp flag of our local regiment on the anniversary of its foundation".
Christopher Southworth, 13 November 2007

Mersey Docks and Harbour Board 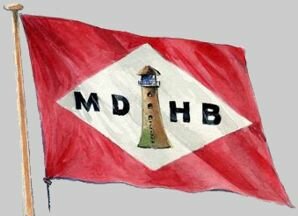 On the Port Cities web site (search for "Flag") are also many proposals for a Mersey Docks and Harbour Board house flag. The flag is from the Merseyside Maritime Museum.
Jan Mertens, 11 February 2005

Mersey Docks and Harbour Board has long since been privatized and has a different name now, but I don't know if it has a new flag as well.
Ron Lahav, 12 February 2005