This is the banner of arms of the Corporation of the City of London. Note however that the City of London does not include all of what is commonly known as London, but the ancient city only, from Fleet St eastward ("the Square Mile"), which is now the financial centre of London. Its authority does not extend to the adjacent City of Westminster, nor to the surrounding boroughs, which together constitute Greater London.

You can see the full achievement of the coat of arms of the City at the bottom of the page on www.cityoflondon.gov.uk
Andrew Yong, 26 April 2000

The St. George's Cross, red on white, distinguishes a number of civic flags associated with London. That of the city of London bears in the canton, in red, the sword which beheaded St. Paul. On the shield which forms the badge of the Corporation of Lloyd's the Cross and Sword of London City are placed above a foul anchor in gold.
Jarig Bakker, 21 December 1999

From Brewer's famous Dictionary of Phrase and Fable:
Dagger, in the City arms of London, commemorates Sir William Walworth's dagger, with which he slew Wat Tyler in 1381. Before this time the cognisance of the City was the sword of St. Paul.

Brave Walworth, knight, lord mayor, that slew
Rebellious Tyler in his alarmes;
The king, therefore, did give him in lieu
The dagger to the city armes.

Sounds like "fable" in the title of the source is the operative word. It's invariably blazoned as a sword, and this City of London website  notes that the modern arms were in use several months before the incident mentioned in the poem. This strikes me as similar to the urban legend about the way the head of the eagle on the US Presidential) coat of arms faces. Since it was changed shortly after World War II, people assumed the change was connected with the change from war to peace. Since the London seal changed about the same time as Wat Tyler's rebellion, people assumed the change had something to do with Wat Tyler's rebellion.
Joe McMillan, 18 March 2004 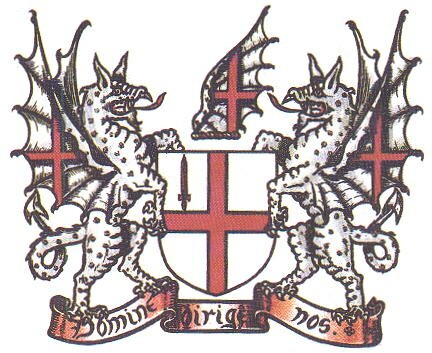 The Arms and symbols of London. The City of London is ancient. Originally Caer Lud named after a mythical Celtic King Lud who is attributed to founding the city in c.130BC. The city was developed into a wealthy port by the Romans but then destroyed by Queen Boudicca of the Iceni in 60AD. Rebuilt again with new city walls in 100AD the city (now known as Londinium) then became the capital of the Roman province of Britannia. The city flourished under the Romans. The Roman legions left Britain in 410AD. The Bishop of London seemed to hold considerable authority over the city at this time which was almost a city state. London was evacuated in 470AD when its defence against the marauding Saxons and Jutes from their base in Kent became impossible. The city was the abandoned and desolate for several centuries. It is said that the original tradesmen and burgers of London were allowed to move back into the mainly destroyed walled city of "Lundonwic". In the 1380 the cross of St. George with the red Sword of St. Paul in the canton was adopted as the city's arms are said to have been adopted. The  current Arms of the City of London with the dragon supporters are an invention of the 17th Century. In 1899 London County Council was established engulfing half of the County of Middlesex and part of Surrey (Southwark). London continued to expand and in 1965 the Greater London Council was formed which engulfed nearly all of Middlesex (causing the complete abolition of the county), large parts of Surrey, Essex and Kent and a small part of Hertfordshire.
James Frankcom, 13 October 2003

Lord Mayor of the City of London 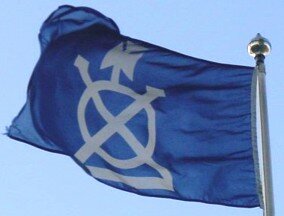 Bridge House Trust is a registered charity, which dates back to 1097. It was named after Bridge House, from where it was once administered. The Trust owns and maintains the five bridges over the River Thames in the City of London, for which it is solely responsible. In chronological order, these are: London Bridge (built), Blackfriars Bridge (built), Southwark Bridge (purchased), Tower Bridge (built), Millennium Bridge (pedestrian only, "took over ownership" 2002). The  sole trustee of the charity is the Corporation of London, the local authority for the City of London. From 1995, the objects of the charity were widened to allow it to spend some of the profits on grants, currently in excess of Ł17 million a year, to charitable projects benefiting the inhabitants of Greater London.

The flag features a large version of 'The Bridge Mark', in white on a mid blue background. The mark is a circle over a saltire with the base two points of the saltire joined to form a base. At the top of the circle is a cross, making the circle resemble a ceremonial orb. The Trust web site states that the mark was most likely designed by a famous seventeenth century surveyor, William Leybourn, who used it to mark plots of land owned by the Trust, (from which the Trust derives its rental income) on maps and plans.

As of September 2005, the flag is only used on Tower Bridge, where there are four of these flags. At the bottom of either side of each tower, on the level of the road, there are four small buildings, atop of which are the flags. The mark also appears on plaques on the bridge, in the modern form on the north (City of London) side of the bridge and in an older form on the south (Southwark) side of the bridge. Additionally, there are two flags on the side of the western walkway at the top of the bridge, facing upstream. These are the Union Flag and the City of London flag. When facing these flags, the Union Flag is on the left and the City of London flag on the right.

This emblem is known as the "Southwark Cross" or "Bridge House Mark". The cross was incorporated in the arms granted to the Metropolitan Borough of Southwark in 1902, a fact that the City Corporation took exception to. The arms can be seen at www.civicheraldry.co.uk. The cross was also allowed for inclusion on the colours of the 23rd London Regiment, and there is some information on the emblem at www.queensroyalsurreys.org.uk.
Laurence Jones, 9 October 2005

It is interesting that the civicheraldry.co.uk web site refers to the Bridge Mark as the "Southwark Cross". However, it does not quote an original source for this assertion, although it dates the grant of arms as 14 June 1902, which is later than the date quoted on The Bridge House Trust web site. The cross, of course, no longer appears on the coat of arms of the present London Borough of Southwark, as referenced on the same site.
Colin Dobson, 14 October 2005

The Worshipful Company of Haberdashers

The banner of arms of the London-based Haberdashers' Company is found on the webpage above, captioned "Flag flying before the Haberdashers' Hall, West Smithfield, City of London".

The arms of this corporation are shown on its website. Quote: "The Worshipful Company of Haberdashers has its origins in medieval times. Throughout six and a half centuries it has moved away from its historical involvement in the trade of haberdashery and developed into a significant supporter of schools and education in England and Wales." (There is much more, of course, on the site's History pages.) A larger image of the arms is here, blazon and all.

The problem with the attached banner of arms (even if the photo were mirrored) as compared to the arms themselves is that the lion seems to be gliding downwards! So the flag is not quite the banner of arms after all - the diagonal ('bend' is the proper term) is in a different position.
Jan Mertens, 26 December 2005

I would have thought the field represented a heraldic fur, too (probably countervair), but according to the blazon it is just "Barry wavy of six Argent and Azure"
Ned Smith, 27 December 2005