In 1969 the General Post Office, a government department, became a government-owned public corporation and was separated into two divisions, Posts and Telecoms. The cable ships went to Telecoms. In 1981 Telecoms was privatised as British Telecoms. In 1994 the cable ships were sold to Cable & Wireless. In 1999 the marine division of Cable & Wireless was sold to Global Crossing Inc. and became part of Global Marine Systems Ltd. Only those ships that were originally owned by British Telecoms, CS's Sovereign, Iris and Monarch, are permitted to wear the defaced Blue Ensign. All other British registered GMS ships wear the Red Ensign.

The badge shows an hour glass in the hand of Old Father Time, being shattered by an electrical discharge. The ensign was originally granted for the cable ships of the General Post Office on 22 January 1877.

by Jarig Bakker, based on the website of the National Maritime Museum.

From the website of the National Maritime Museum, "the house flag of Cable and Wireless (Marine) Ltd, London. A blue flag with a yellow motif of an arrow circling a globe. The flag is made of a synthetic fibre bunting with the device appliquéd in nylon fabric. It has a cotton hoist and a rope and wooden toggle is attached.

The Imperial wireless and cable conference of 1928 recommended the foundation of a holding company and an operating company combining wireless and cable interests, in order to keep the strategically important but unprofitable undersea cables in British hands. This was achieved through a merger of the communications interests of the cable companies and Marconi. The resulting company began as Imperial and International Communications Ltd but changed its name to Cable and Wireless Ltd in 1934. The Cable and Wireless Marine Service originated in the cable laying and repairing activities of the original telegraph companies.
Jarig Bakker, 8 August 2004

Of the mass of companies which combined along the way in making Cable & Wireless Ltd. are at least two others who had their own flags. These are West Coast of America Telegraph Co. Ltd. with a blue flag showing a white grapnel and cable, sometimes the grapnel being yellow and Western Telegraph Co. Ltd. with a blue swallowtail and an ornate yellow and black border except at hoist, the emblem being a yellow and black zigzag angled flash with in the lower fly the white letters "WTC" with the "T" being taller. According to Talbot-Booth these flags, together with that of Eastern Telegraph Co. Ltd., were replaced in 1939 by the Cable & Wireless flag although in his WW2 Merchant Ships editions he still shows the companies operating under their own names. Despite this Brown, which had shown the same version for Western Telegraph Co., in 1943 shows a different flag doing away with the border and changing the lettering to "WTCo." as shown below: 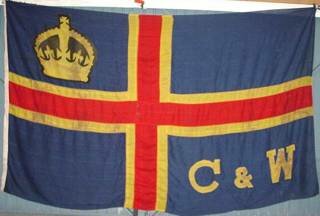 IN 1934, IMPERIAL and International Communications, formerly the Eastern Telegraph Company, became Cable & Wireless. The new name was designed to more clearly reflect the combined radio and cable services which it offered, without reference to the Empire. (http://www.cwhistory.com/history/html/CableWire.html) . The flag shown is a yellow fimbriated red cross on a dark blue field, with a Tudor crown in the canton, and C & W in yellow in the lower fly.
Colin Duke, 17 January 2005

Cairn Line of Steamships Ltd. This flag is actually that of William Thomson & Sons who were, according to Talbot-Booth, absorbed around 1891 and then purchased in 1907 which sounds rather back to front. They themselves originated in 1833 as Cairns & Young which had a red flag with a white delta triangle bearing the intertwined black letters "CY" [see image below], the triangle being a symbolic "cairn". They then became Cairns, Young & Noble in 1892 and it is from around this time that they became known as the Cairn Line of Steamships using the previous flag minus the lettering. Both the Cairns and the Thomson flag were used from 1907 and then in 1928 the company was taken over by Furness Withy and it appears that this saw the official formation of the Cairn Line of Steamship Ltd. to operate the shipping under the quartered Thomson flag although sources note that the old Cairn flag was still to be sighted on occasions.
Neale Rosanoski, 19 February 2004

This one is a triangular flag, red, with a black triangular stripe along the top and a yellow disc charged with a red something vaguely looking like a bear.
Jorge Candeias, 14 Feb 1999

I’ve a copy of their brochure in front of me — the animal is a lion, a rather chubby one granted, but a lion all the same.
Ian Sumner, 15 Feb 1999

Indeed this "bear-like creature" is actually the Lion Rampant, the Scottish national symbol. I agree it doesn't look much like a lion in this rendition
John Jones, 11 April 2003

Caledonian MacBrayne, Hebridean & Clyde Ferries. As John states the animal is derived from the Scottish lion rampant although apparently the tail was altered from a "waving" position to one "close to the back" in order to fit into the disc. The black edging at the top is unusual but possibly it is meant to be line with the funnel which is red bearing the emblem and has a black top.

David MacBrayne Ltd., with origins dating from 1851, used a blue pennant with overlapping saltires of red over white with sources of the latter varying as to the amount of field which the saltires occupied with some squashing them up into the first 1/3 or so of the flag.

The original flag of the new company combined the two by moving the saltires towards the fly and placing the yellow disc with the lion in the hoist. I get the impression that the change to the current flag occurred in the early 1990s. Duncan Haws includes it in his 1994 Merchant Fleets No. 26 but does not show the upper black edging and he also shows the lion as guardant. As he also shows this for the funnel and photos prove that is not the case, I have my reservations although his version may have resulted from a proposal. One point of uncertainty that I have with all these flags is their proportions with sources tending to show them as in a more triangular format whereas the early flags, especially, may have been long and narrow pennants.
Neale Rosanoski, 19 February 2004

David MacBrayne was one of three partners in David Hutcheson's company and eventually took exclusive control in 1879 after the retirement of David Hutcheson in 1876 and Alexander Hutcheson in 1878. MacBrayne died in 1907, aged 92, having worked up until the previous year, by which time the operation had become David MacBrayne Ltd. It was reconstructed in 1928 as David MacBrayne (1928) Ltd, owned jointly by Coast Lines Ltd and the LMS railway. As David MacBrayne Ltd from 1934, 50 percent remained with the private Coast Lines Ltd until it was purchased by the Scottish Transport Group in 1969 and on January 1, 1973 was merged with STG's other subsidiary, the Caledonian Steam Packet Company to form Caledonian - MacBrayne. MacBrayne's territory was the Western Isles with Oban as base, but a regular service was run from Glasgow (later Gourock) to Tarbet and Ardrishaig on Loch Fyne for delivering mail and passengers for onward connections to the Western Isles. Marketed since the 19th century as the "Royal Route" with reference to an earlier visit to the area by Queen Victoria, MacBraynes ran some well-known, well-loved and long-lived steamers on the Clyde until the end of the 1969 season when the diesel-electric vessel Lochfyne was withdrawn.
Phil Nelson, 18 October 2003

Dark blue with a white oval centered bordered in a weird shade of purple/brown and charged with the sillouette of a camel facing the hoist in dark gold.
Jorge Candeias, 21 Mar 1999

The (a?) historical flag of this company: White with an outline of a camel centered and facing the fly and the initials "CL&Co" below the camel, all in red.
Jorge Candeias, 23 Mar 1999

There was another flag for this shipbuilding company in the Observer Book of Flags [eva59], with following text:

Many shipbuilding companies also have their own House Flags. Such a flag is displayed, along with that of the prospective owners, while a vessel is being launched. It may also be flown during her trials, to be replaced, as soon as these are satisfactorily completed, by that of the owners to signify that she has changed hands. ... that of Cammell Laird and Co. is an amusing example of punning heraldry.

Capper, Alexander Ltd. lost all 13 of their ships during WW2, and were taken over by Houlder Line Ltd. after the war. Their house flag was the "busy bee" - blue background with a golden bee in the centre.
Bernard de Neumann, 11 August 2004

The Carron Company, Carron - red flag with the company seal in the center. The Carron Company was on the Clyde river in Scotland, producing guns, ammunition, etc.
Jarig Bakker, 24 January 2005