Interestingly, the MacAndrews logo that appears in the "Carga e Transportes" supplement is very different. All these last images have been taken from the same ad, an ad to MacAndrews, that includes these companies it operates with in Portugal: Bank Line, already sent, New Guinea Pacific Line and Crocodile Line, also already sent, plus two more: Ellerman, a company that has three lines from Lisbon or from Leixőes (to the British Isles, to the Mediterranean and to India, Pakistan, Middle East and East Africa), and APL, a company that serves the US and Canada and the Far East.

The logo of MacAndrews (or, better, MacAndrews Lda. / Group Andrew Weir Shipping as the full writing appears in the ad) is not only green, but quite a bit more complicated than appears in Aingeru's image, including a crown and a pair of hands holding the ship:

The logo with the crown and a pair of hands holding the ship belongs to Andrew Weir Shipping Ltd. The one of McAndrews is simpler.
Aingeru Astui Zarraga, 26 April 2002

Like the image above, but with two red stripes altered to purple.
Source: Loughran (1979), who writes: "This is a very old company, its former location dating back to 1770, and it has been prominent in trade to the Iberian Peninsula for many years; hence the Spanish national colours which accompany the ship on the flag. During the Spanish Civil War, these stripes were altered to purple, yellow and red, but resumed their former colouring on the cessation of hostilities."
Jarig Bakker, 20 December 2005

In the middle 1950's, I sailed in two of McAndrew's ships, the M.V. Pinto and the M.V. Pelayo. On the Spanish coast we flew the McAndrew's House flag, but on the Italian coast we flew the Glyn Line House flag. I can remember a white lozenge bearing a black capital B and there was also some red and also some green in the flag. As I remember, the Glyn Line was originally a West Country Shipping Company whose main trade was in China Clay. I have searched all the flag sites.
Albert Aliffe, 18 April 2006

This company was known as Manchester Liners in the 1950's.
James Dignan, 8 October 2003

From the website of the National Maritime Museum, "the house flag of the Manchester Ship Canal Co. Ltd., Manchester. A blue rectangular flag with two broad white stripes across the centre bearing the blue letters 'MS', 'CC'. The flag is made of a wool and synthetic fibre bunting. It has a cotton hoist and is machine sewn. A rope and toggle is attached."

Loughran (1979) writes: "Forty miles from the sea, the port of Manchester has always required a large fleet of tugs, not only to work on the dredging of the canal, but to assist ocean-going ships to negotiate it. For the better part of a century, these tugs and ancillary vessels, have borne the same livery. The two bands of the funnel are repeated on the house flag, where the company initials are added".
Jarig Bakker, 20 August 2004

Found by chance, this nice house flag belonging to Mardorf Peach & Co (third photo, clickable here).
Comments (the flag is on offer): “This is a flag from the Mardorf Peach & Co. London owned by the Weston Shipping Company and the size is 4 ft x 3 ft (122 cm x 91 cm). The company was involved in the distribution of Flour/Grain shipments. It was used during the 1950’s – 1960’s. Some of the ships owned by this company were: Camilla Weston, Catrina Weston, Gretchen Weston, and Jana Weston”. The first and third ship were bought in 1971 from the Blue Star Line (http://www.theshipslist.com/ships/lines/bluestar.html). I understand both companies were part of the important ABF Group (Associated British Foods).

The flag has a red field with a broad green border, in the centre a white disk bearing a yellow sun of sixteen rays (straight and wavy, eight each).
The Shipspotting page shows Camilla Weston (sun on funnel).
Jan Mertens, 6 January 2009 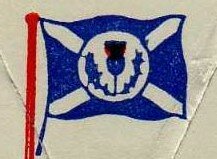 This beauty appeared on Maritime Timetable Images a few days ago ( http://www.timetableimages.com/maritime/images/mcco.htm ):

Flag of Scotland (white saltire on blue) with a large white disk in the middle bearing a red-and-blue thistle. In the drawing, the disk is enclosed by a blue holding line.

“1948 saw the (…) acquisition of the ships and goodwill of McCallum, Orme & Co which for many years had worked cargo (and passenger, jm) sailings to the Isles from Glasgow. The sailings of the two companies gradually integrated and the services were pruned, partly by the increased use of improved roads by lorries and causeways.”

From the website of the National Maritime Museum, "the house flag of McIlwraith McEacharn & Co. Proprietory Ltd., Melbourne and London. A rectangular yellow flag with a red rampant lion in the centre within a border of double red lines. The flag is made of a wool and synthetic fibre bunting. It has a cotton hoist and is machine sewn. The lion in the centre is stenciled. A rope and Inglefield clip is attached. The design is based on the Royal Standard of Scotland."
Jarig Bakker, 20 August 2004

Founded 1875, also known as the Scottish Line, operating vessels between England, Australia and Papua New Guinea. The company was a pioneer in the development of refrigerated shipping. Their Australian operation apparently helped form Bulkships Pty., Ltd. in 1958 which became a partnership of the company and Adelaide Steamship Company, which eventually became Associated Steamships Pty. Ltd. (now ASP). Their ships appear to be run by ASP. Stewart & Styring (1963) places this company in Melbourne.
Phil Nelson, 18 October 2003

Mediterranean Steamship Co.
There have been several companies with similar names, but none I have found information on matches this time period. The flag in Flaggenbuch 1905 is a distinctive red flag with two white vertical stripes, forming five equal bands.
Source: Flaggenbuch 1905

Lloyds Book of House Flags and Funnels (1912) shows the house flag of "Mercantile Steamship Co., Ltd." (#81, p. 40), a company based in
London, as blue with the white letters "MSCo." The iron steamship "Boyne" was launched by the "Mercantile Steamship Co." in 1881.
http://portcities.hartlepool.gov.uk/server.php?show=conMediaFile.493
Ivan Sache, 23 March 2008

From the website of the National Maritime Museum, "the house flag of Metcalf Motor Coasters Ltd., London. A green swallow-tailed burgee with a white border. A white 'M' is placed in the centre. The flag is made of a wool and synthetic fibre bunting. It has a cotton hoist and is machine sewn. A rope and toggle is attached."
Jarig Bakker, 20 August 2004

An early starter, at 23 William Milburn was already involved in shipping in 1849 and had ships of his own from 1852 on. This trade was coastal (coal), operating out of Newbiggin and Blyth. From 1857 till 1879 he and Edmund Watts - as the senior partner - operated Watts, Milburn & Co. Already active in the West Indies, India, and China, Milburn saw his field of operations now extended to the Black Sea. Other ventures were the Hamburg-Brasilianische Dampf. Ges. in cooperation with Bolten (to Brazil) and later the famous Hamburg Süd (to South America in general). The partnership with Watts having been dissolved, Wm. Milburn & Co., new and London-based from 1880 on, established routes to China and Australia. In fact, 1883 saw the foundation of the Anglo-Australasian Navigation Co. with Antwerp as an important link in the chain (the line was known as the Australasian Steam Navigation Co.). Both entities were put together under a new name, Milburn Line, in 1890. There was a slack in emigrant transportation then resulting in a heightened importance of cargo, of course, and tramping as well. One ship however, a collier, was operated by the separate Ashington Coal Co. 1905 saw the end of passenger transportation. The final name, Milburn & Co., Ltd. was introduced in 1912. Over the years, cooperation with firms such as Royden and Tyser led to the establishment of the Commonwealth & Dominion Line later known as Port Line Ltd. (1914). Milburn - acting on its own - operated some ships from 1927 on but I do not know when this ended.

Now to the flags. The first one found is a red triangular pennant with initials in white 'W.M & Co' (the 'o' is raised) and can be seen here, top of page: http://www.red-duster.co.uk/MILBURN.htm.

The second attachment shows the twin pennants of the Anglo-Australasian Steam Navigation Co. as rendered by the on-line 1912 Lloyds Flags & Funnels: http://www.mysticseaport.org/library/initiative/Impage.cfm?PageNum=13&bibid=11061&ChapterId=8, see no. 241. Red pennant uppermost, in fact an elongated version of the preceding one, and a white one accompanying it, bearing the red initials ‘AASN Co’ (again, the ‘o’ is raised).

On the other hand, according to Red Duster “The pennant houseflags of the two companies were amalgamated into a single rectangular flag. 1890” which we see here, top of page: http://www.red-duster.co.uk/MILBURN4.htm.

Lastly, a rectangular flag for ‘Wm. Milburn & Co., London’ appears in the on-line 1912 Lloyds Flags & Funnels: http://www.mysticseaport.org/library/initiative/Impage.cfm?PageNum=7&bibid=11061&ChapterId=8, see no. 122. Only the form is different from the short and long pennants; colours and initials are the same.

All this is fairly clear except for the rectangular WMC/AASNC flag, which Lloyds ought to have shown – or so it seems, if we believe Red Duster – instead of the twin pennants.

Of course there is still the obscure Ashington Coal Company… And although the later Watts flag is known, what did the combined Watts-Milburn flag look like?

Lloyds (1912) shows the house flag of Miller & Richards, Glasgow, as horizontally divided blue-white-blue with the red letters M. R. in the middle of the white stripe. The flag is also seen on http://library.mysticseaport.org/initiative/ImPage.cfm?PageNum=30&BibId=11061&ChapterId=8 .
Ivan Sache, 31 May 2006

W. Montgomery & Co., Ltd., London. The flag is red with a white rectangle charged with a M (blue).
Based on The Mystic Seaport Foundation
Ivan Sache, 1 February 2004