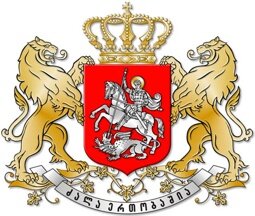 Adoption of the new coat of arms of Georgia

It can be blazoned as:

Transient coats of arms of Georgia used in 2004

Since no official coat of arms was adopted until October 2004, he President of Georgia used different versions of the arms in different events and places; he indeed used the "last version" of the arms every time.

The online magazine Civil shows 11 eleven designs in competition, with the following comment:

A state commission has exhibited the designs that would compete to become Georgia's national symbol. A jury is to decide on the final design and submit it to the Parliament's approval. It is expected that the decision would be made by May 26 - Georgia's national holiday.

The proposal selected by the commission for adoption was not adopted by the Parliament, but used anyway by the President during the national holiday celebration. It is blazoned as follows:

Quarterly per cross or; 1 and 4, gules, mounted St. George with a lance slaying a dragon, all argent (representing all Georgia); 2 azure, a mount flamed and pierced with two arrows in saltire, all or (representing ancient Iberia; eastern Georgia); 3 azure, golden fleece on a ribbon of the fourth (representing ancient Colchis, where the Argonauts stole the Golden Fleece; western Georgia); escutcheon: purpure, tunic of Our Lord of the second (representing the holiest relic of Georgia).
The shield surmounted with the royal crown of Georgia (Iberian crown).
Supporters, two lions rampant or.
Motto: Strength in Unity (written in the Mkhedruli script of Georgian alphabet).

Several members of the Parliament found that coat of arms is too "pagan", because of the Golden Fleece and Prometeus' Caucasus mountain, two elements from Greek mythology.

The early proposals of the coat of arms were without a motto. Motto was discussed by the ad hoc commissiin as a separate topic. The commission eventually decided to adopt the motto "Strength in Unity" and Gongadze added the motto to his proposal.