On their uniform (except for musicians) the cap badge was always plain silver. Legend has it that the badge was deliberately designed to look like a mirror in order to repel any evil spirit a policeman might encounter on the beat. The same legend also says (although this is baseless given the uniform was also worn elsewhere within the Empire) that the buttons on his shirt was laid out like a cross for the same reason.

Until the late 1960s the scroll read 'Hong Kong Police'. The 'Royal' title was granted for service during the 1967 riot. Only five police forces have ever received this honour. After 1997 a similar badge and flag has been in use. The main difference being: modern harbour scene; red bauhinia blossom replaces the crown; the scroll reads 'Hong Kong Police' in both English and Chinese.
Miles Li, 9 July 2003

On the vaguely related topic of police cap badges, before 1967, the Hong Kong Police sported an entirely silver badge comprising the Colonial badge surmounted by a "Tudor" crown and surrounded by a garland of leaves, from which plant I do not know. The scroll beneath bore the legend "Hong Kong Police".

When the distinction "Royal" was conferred, the badge became somewhat more squat in shape, the "Tudor" crown was replaced by St. Edward's crown, the leaves in the garland shrank and the scroll was enameled blue with the words "Royal Hong Kong Police" picked out in silver. The Colonial badge in the centre, depicting, some say, Hong Kong's first bribe, remained largely unchanged.
Peter Johnson, 9 July 2003

by Martin Grieve and Mattias Hannson 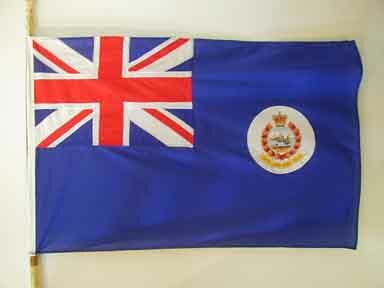 When living in Hong Kong during the summer of 1997 I set about to get my hands on a proper 1:2 3x6’ Hong Kong Blue Ensign as used by the Hong Kong Government. This was a hard task. For some reason all the flag makers in the colony made flags in absurdly square looking ratios. 3:5 and sometimes 2:3. The same flags I had bought on a previous visit I now did not want anymore.

So I came across an Englishman selling off a stock of HK Blue Ensigns in time for the handover. I contacted him to ask him why his flags were 3x5' rather than 3x6', but he had no clue. He just said that he had a connection within the HK Government and that he had gotten a stack of flags (50 or so) to sell and they were all either 3x5’or 4x6'. All flags were the same with the exception of two flags. One was a 3x6' HK Governor's Flag (UJ with badge within garland) and the other a 3x5' Royal Hong Kong Police Blue Ensign that had been displayed on an indoor flagpole in the Commissioner of Police's office. That was all he could (or would) tell me. All the flags were high quality fully sewn flags and I was never in doubt that they were made for the HK Government as they had stamps on the white band that holds the cord.

I had heard that some of the Union Jacks and HK Blue Ensigns were made by inmates in the HK prisons. These all appeared to be 1:2. But maybe the inmates weren’t producing them fast enough and an order was placed with a local flag maker without specifying the ratio? Who knows? In any case I snapped up the two flags that were different even though the ratio on the Police Ensign was wrong as I thought it might have been a rare flag.
Mattias Hansson, 18 April 2003

I sent the image to someone who been in the Hong Kong Police. He replied that at one time he was visiting the office of the Commissioner of Police on a daily basis, and that as far as he could remember, the flag stood in the corner of the office, and was there more or less as a symbol.
David Prothero, 5 May 2004

Since 1997, the badge has resembled that of the RHKP, save that the crown has been replaced by silver, and not red, bauhinia flower. The scroll is still in blue enamel, but now bears again the legend, "Hong Kong Police", as well as its Chinese equivalent. The charming old Colonial badge has been superseded by a rather bland depiction of our ever-changing and heraldically challenged waterfront.
Peter Johnson, 9 July 2003