History of the flag

The Society of United Irishmen, a republican movement which emerged in the 1790s, used a gold harp on a green field (the 'Green Flag'). This flag was carried in the rebellions of 1798 and 1803 and it quickly achieved popular acceptance as the national flag. The flag was used during the widespread peaceful agitations for 'Repeal' of the act of union in the 1830s and 1840s but was viewed as a seditious emblem by the British authorities. In 1848 the Repeal movement split and the radical wing (known as 'Young Ireland') adopted both republican ideas and a tricolour inspired by that of the second French republic. The Young Ireland rebellion of 1848 was quite a small affair and the tricolour flag was largely forgotten until the twentieth century. The next revolutionary movement, the Irish Republican Brotherhood (or 'Fenians') of the 1860s, was much more formidable and it reverted to using the Green Flag. That flag was also used by all the nationalist politicians who campaigned for 'Home Rule' (devolved government within the United Kingdom). By about 1880 or so the Green Flag had become officially tolerated to the extent that one was no longer likely to be arrested for displaying it, but it never had any official status and was always seen as a nationalist emblem.

The Green Flag was extensively used during the campaign for repeal of the Act of Union which Daniel O'Connell led during the 1830s and 1840s - the flag is invariably shown in illustrations of the mass meetings convened by O'Connell during that period and it is probable that it was in continuous use from 1798 onwards. Both the Green Flag and the tricolour were used by the insurgents in 1916, but in the period after the rebellion the republican separatists in Sinn Féin tended to use the tricolour while their rivals in the Irish Parliamentary Party (which advocated 'Home Rule' for Ireland within the United Kingdom) used the Green Flag exclusively. The alternative national flags thus became the flags of competing political parties until the general election of December 1918 when Sinn Féin's landslide victory finally relegated the Green Flag to a secondary role.

Before independence Irish athletes had to compete as part of the British team, but an episode which occurred in 1906 may be of interest. I quote from G.A. Hayes McCoy (1979), 'A History of Irish Flags from Earliest Times', p. 182:

"In 1906 when Peter O'Connor won the long jump championship at the Olympic Games in Athens, he successfully objected to the raising of the union flag ... in honour of his victory and succeeded in having a green poplin harp flag, which had been provided by his thoughtful supporters, hoisted instead."

This refers to the national flag in popular use at the time, the well-known Green Flag.

The Green Flag in the Boer War

I just finished reading "The Green Flag: A History of Irish Nationalism" by Robert Kee--a very good book which, you will not be surprised to learn, contains numerous flag references.

One such reference is to the flag carried by MacBride's Irish Brigade during the Boer War. John MacBride, a friend of Arthur Griffith's, organized this unit with Irishmen (most of American origin) living in the Transvaal who were willing to fight with the Boers. The commander was a Colonel Blake, a former US Army officer. When Blake was wounded in action, MacBride took command himself.

Opinion in Ireland (and among liberals in Britain) was strongly pro-Boer, and a Transvaal Committee, co-chaired by Griffith, was formed in Dublin to support MacBride's efforts. One of its first acts was to purchase and send out a flag for the Irish Brigade. It was green with gold fringe and bore a gold harp in the center, plus the inscriptions "Our Land -- Our People -- Our Language."

MacBride's Irish Brigade probably numbered no more than 500 effectives at any given time; it fought in about 20 engagements, with 18 men killed and about 70 wounded. The Brigade was operational from September 1899 to September 1900, at which time it was disbanded and most of the men crossed into Portuguese Mozambique.
Tom Gregg, 25 April 2002

Were the inscriptions in English or Gaelic? The last part of the slogan would seem rather ironic if it was in English.
Ned Smith, 27 April 2002

The description I have from "The Green Flag" doesn't say, but I agree it would be odd if the inscriptions were in English.
Tom Gregg, 27 April 2002

I think it may a different flag, but there is a similar flag, without the fringe or motto, in the Border Regiment Museum in Carlisle Castle. It was captured by men of the regiment from some Irish volunteers. From memory, it is only a small flag, perhaps three feet long by two feet wide.
Ian Sumner, 27 April 2002

According to Hayes-McCoy the flag was of green poplin bordered with gilt braid and fringe. Irish Transvaal Brigade in gilt letters across the top, Ar dTir Ar, Ar Muintear, Ar dTeanga in gilt letters across the bottom, and a gilt harp in the centre of the flag. The green cloth within the outline of the harp was cut away and the triangular hole bridged by six double threads fastened at each end to represent the strings.
David Prothero, 27 April 2002

This is a complicated subject. There were in fact two Irish units ('commandos') which fought for the South African Republic - the second being, in part, formed as a result of differences that arose among the members of the first. A number of different flags were used at various times.

The best source of information on the subject is Donal P. McCracken, 'MacBride's Brigade: Irish Commandos in the Anglo-Boer War' (Dublin, 1999). The author is professor of history at the University of Durban and the book is mainly a military history but it contains several passing references to flags - as well as one photograph which shows members of the first Irish commando with an uninscribed Green Flag. I will send a scan of this photograph when time permits.

McCracken quotes (p. 26) from a recruiting notice addressed to Irish (and Irish-American) miners on the Rand - a group who were particularly useful as demolitions experts because of their experience with explosives - and this notice shows the importance that was attached to use of the national flag from the beginning of the war:

"Every Irishman worthy of the name and every Irish-American in South Africa will be found in the ranks of the Irish Brigade of the S.A.R., under the sacred Green Flag, fighting against the brutal English Tyrant. 'God save Ireland'."

McCracken also quotes (p. 32) from a song that became popular in Ireland when news arrived of the Irish commando's participation in the Boer advance into Natal at the start of the war:


"From land to land throughout the world the news is going round, That Ireland's flag triumphant flies on high o'er English ground. In far-off Africa today the English fly dismayed Before the flag of green and gold borne by McBride's brigade."

On p. 59, McCracken describes the presentation to the first Irish commando of the flag shown in G.A. Hayes-McCoy, 'A History of Irish Flags from Earliest Times', plate iv. The flag was presented on 23 December 1899, having been sent out from Ireland. It is a Green Flag with the centre of the harp cut away. An inscription over the harp reads 'IRISH TRANSVAAL BRIGADE' and one below the harp reads 'AR dTIR AR MUINTEAR AR dTEANGA' - 'our country, our people, our language' in Irish.

On p. 166, McCracken describes another flag that is also shown in G.A. Hayes-McCoy, plate iv, and which was carried by an Irish commando - it is unclear whether it was the first or second. This is an uninscribed Green Flag with a harp of the 'winged-maiden' type above a wreath of shamrock in gold. An unusual feature is that the harp is displaced towards the fly. This flag remained in South Africa for some time and was displayed at a public meeting in Pretoria held to support Irish independence in May 1921. McCracken (p. 166) quotes from a contemporary report as follows:

"The bullet-pierced flag of the Irish Brigade was hung on the platform, and among those on the platform were men such as Mr Gillingham, who had fought under that flag."

It was presented to the Irish state in 1952 and is now in the National Museum of Ireland.

Some 1798 insurgent's Green Flags here: http://www.iol.ie/~98com/flags.htm and information on their use and the often hasty manner in which they were produced (the women, we hear, did not limit themselves to flag-making). The ballad "At Boolavogue" mentions the Green Flag.
Jan Mertens, 16 February 2004 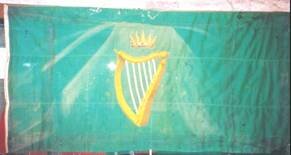 The flag above is held in the Museum of the Border Regiment in Carlisle Castle UK. According to their records (very sketchy unfortunately) it is a regimental trophy that was captured in the South Eastern Free State in April 1900 near the town of Wepener. And that is all they know about it. Inquiries at the National Museum of Ireland also drew a blank. The two Irish Volunteer Brigades with the Boer forces had several green flags with golden harps among them but neither ever served in that part of the country. This is also an unusual design with the crown over the harp - especially as these volunteers were all fierce republicans. The crown itself is also unusual. The only other place I have seen that design of crown before is on the coat of arms of the province of Munster in Ireland, that is, until I saw the flag of British Columbia which has more or less the same design of crown in the middle of the Union Jack. Can anyone who might have seen this design of Irish flag before and can give me a lead as to whom it may have belonged to or where it might have originated? What about the crown? What is the history of this particular design of crown?
Andre Burgers, 21 October 2004

This is a 'standard' heraldic crown known variously as 'antique', 'eastern' or 'radiated'. It was used on some Irish flags by those in favour of an Irish kingdom that was separate from the British kingdom. Since there was no recognized Irish crown the antique crown made a suitable substitute. It appeared on some flags of Irish Volunteer units formed for the defence of Ireland during the American War of Independence, and in the 1840s on flags of the movement for the Repeal of the Union with Britain. It does seem strange on a Boer War Irish brigade flag.
The antique crown on the arms of British Columbia was added by the College of Arms. The original arms, designed by Cannon Arthur Beanlands, contained features that were heraldically unacceptable. The antique crown appears to have been an alternative to the royal crest which was above the shield in Beanlands' design.
David Prothero, 23 October 2004

An antique crown seems to have been adopted as a traditional Irish symbol, because of its use in the arms of Munster. The two Southern Command Brigades of the six Irish Army Brigades, have an antique crown on their Colours, introduced in 1964. Photographs of them are in Irish Flags by G.A.Hayes-McCoy.
David Prothero, 14 November 2004