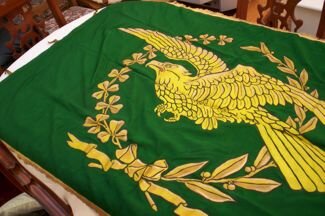 I know this flag existed during the Irish Rising in 1916 and at that stage Ireland was under British rule so you may have seen reference to this flag in the past. Below is correspondence I've had with two flag organisations in Ireland and the story I sent them.
Richard Case, 23 January 2007

I heard this story third hand but apparently my great aunts mother lived on Mount street in Dublin during the Easter Rising, an Irish volunteer knocked at her front door and handed her this flag and a number of bullets. It was his intention to call back for the flag after a few hours but he never did. Since then the flag had been folded away in my great aunts wardrobe, When I brought the flag and bullets to Collins Barracks a gentleman there informed me that he would have to hold onto the bullets for security reasons. I'm afraid I can't give anymore information and my great aunt has since past away.
Richard Case, 23 January 2007

I had a look through our book of Irish flags and I have found a series of flags that have the same type of wreath design. The wreath on your flag has bay / laurel leaves and berries on the left and shamrocks on the right bound together with a bow. This is a common feature with the Irish Volunteers flags c 1770/90's. The book however, though very good at describing flags, is not very good on actually giving a meaning for the individual designs, so I can't tell you why they were used etc.

I think the eagle represents an American aspect. Certainly anyone I showed it to here thought the same and I can't see any eagle representations in Irish flags. The only alternative is that it may be a Phoenix. There is a mention in the Irish Volunteers chapter of a medal with a Phoenix on it.
Jenny, Flags Ireland, 12 December 2006

That is a most interesting flag and indeed, quite a beautiful one too. From a first look it appears to be American in origin and style, possibly an Irish Republican Brotherhood or Fenian flag from the US. But this is just a guess at the moment and I'll do some more investigation on the flag.
Michael Merrigan, Hon. Secretary
Genealogical Society of Ireland, 12 December 2006

That certainly is a very interesting flag - a striking and (as far as I am aware) a unique design, displaying what seems to be a very good standard of workmanship. Most of the surviving Irish Volunteer unit colours from that period look quite amateurish in comparison.

It's not easy to account for it: it is entirely unlike the Irish Volunteer colours - no harp, no sunburst, no inscription to indicate the identity of the unit. The other principal body that participated in the 1916 rising was the Irish Citizen Army, and the current design has no resemblance to its Starry Plough flag either.

This is no more than a theory, and it is probably completely wrong, but it's the only one I can think of at present. There was a third body that took part in the Rising, a group called the Irish National Foresters (INF). They were actually an armed section of the Ancient Order of Hibernians (AOH) in the United States. In Ireland, the AOH was closely aligned with the movement for 'Home Rule', and was strongly opposed to revolutionary republicanism. But the US branch of the AOH was much more radical and it succeeded in organising among Irish emigrants in Britain. A small force of their members (the INF), travelled to Dublin from (I think) Liverpool to take part in the rising. As far as I remember, there were only about twenty of them involved. Note, however, that the only grounds for this suggestion is the somewhat American appearance of the bird ...

I will do some research next week to see if I can find out where the INF contingent was stationed during the Rising. If it was anywhere near Mount Street, it would strengthen the theory. Unfortunately, I have a vague idea that they were stationed on the north side of Dublin (Mount Street is on the south side) and that they never saw action - some of the rebel garrisons had still not been engaged by the time the order to surrender was given.
Vincent Morley, 24 January 2007

The Foresters are a completely different Organisation founded in 1887 and are still in existence.  They have always been a Nationalist Friendly society. They broke away from a similar British group called the Ancient Order of Foresters. At one time they were a very large organisation throughout Ireland and its Diaspora. But since the founding of the welfare state they have declined greatly. They are now a small group mainly in the  North of Ireland.
Mr. Morley is correct in stating there was an Armed Division of Hibernians but they were called the Hibernian Rifles. He is correct in stating that the Rifles were a radical group and were funded by the Irish in the States. There has and still is a division in the AOH between the American group and the Board of Erin Group. They are two independent groups who share the same name.
Fr. Gabriel Burke, 22 January 2008

This might be the 99th New York State Militia Circa 1860, an Irish Fenian regiment referred to as the Phoenix Regiment.
Sean Downey, 15 November 2007