Nesher (meaning eagle, named after a cement factory whose workers' quarters were the basis for the town foundation), is situated on the NW slopes of Mount Carmel about 5 km west of Haifa. Established in 1925, it has 22,000 inh. and became a Local Council in 1952 and a municipality in 1995.
The flag above the town hall shows the municipal emblem on a white panel on an orange field. The inscription below the emblem should be semicircular. The municipal emblem was published in the official gazette (Rashumot), YP 997, 28 February 1963, for the then Local Council. The official emblem has still got the Local Council inscription on it, since it was never replaced after it was upgraded to municipality in 1995.
Sources: author's own observation, 1 September 2001; this webpage.
Dov Gutterman, 12 September 2001

Local Council of Nesher was founded in 1952 as a unification of four communities: Nesher (Est. 1925), Tel Hannan, Ben Dor and Giv'at Nesher. Municipality since 1995.
according to <www.gal-ed.co.il>, the emblem was designed in the early 1950' when Nesher was proclaimed as local council. It show and eagle who soread his wings above the city's neighborhoods. The chimneys represent the industrial plants of the city.
Sources: <www.nesher.muni.il>, <www.mapa.co.il>.
Dov Gutterman, 29 April 2005 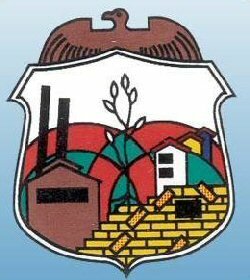