The "World Peace Association" appears to be based in Jenkins, Minnesota. I assume the red-white-brown-yellow-black is to represent the "five races of mankind". I found this flags on a card at http://www.dicklightle.com/card.asp?ID=33997.
Jan Mertens, 16 February 2004 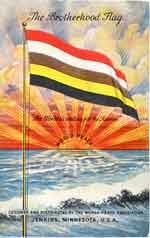 I ran across the Brotherhood Flag card you put on the internet. My mother was the Foreign Correspondent for the World Peace Association, appointed 30 June 1957. The flag you depicted on the card was dedicated at Odessa, New York in May of 1958. It then became part of the exhibit for the association at the Brussels World's Fair. I was the flags standard bearer at the dedication.

I can tell you the people in the organization for world peace began in 1915 in Northfield, Minnesota, USA. They designed the International World Peace Flag. It was a white flag with a 3" red strip at the top and bottom to outline the flag. the center of the flag was a globe showing the East and Western hemispheres. Centered in the globe was a dove and olive branch. Northfield, Mn is just south of Saint Paul, Minneapolis on the interstate. At sometime prior to 1930 the headquarters moved to Jenkins, Minnesota. My mother's certificate of appointment has Northfield printed on it, crossed out, and Jenkins printed in its place. On the 12th day of May, 1938 the
association applied for registration of the flag and changed flag design. and registered it with the Secretary of State Office in Minnesota and the flag became official on 5 November 1939. The description of that flag as written on the certificate is as follows.

"The Brotherhood Flag consists of five (5) horizontal stripes of equal width. The first or top strip is red the second stripe is white, the third stripe is brown, the fourth strip is yellow and the fifth or bottom stripe is black. Each stripe represents one of the five different groups of the human race."

The flag prior to the final one I just described consists, by dimensions, of two squares of equal size. The staff end (one square) is composed of a blue field upon which fifty white five-pointed stars have been arranged in such manner as to form a large five-pointed star, in the center of which a white dove in full flight, with green olive twig in beak. The blue star-studded half of the flag has long been a symbol representative of the heavens and of man's belief in a Divine Creator and of his hope for a life hereafter. The dove with olive twig in beak has likewise long been recognized throughout the world as man's most outstanding emblem of peace. The fly end of the flag (also one square) has the 5 horizontal stripes. Due to costs of the flag's manufacture this flag was discontinued and the flag with just the 5 horizontal stripes became the associations official flag. This flag was discontinued due to the cost of manufacture as was the 1915 version.

In 1954 Edith Wynner from NYC wrote a book on World Federal Government, published by Fedonal Press, Afton NY, and printed in Holland. It had big sales and was reprinted 3 times. About a month ago I obtained the book from our library system. So it's still around. Anyway, following WWII and the creation of the United Nations and into the early 60's the World Peace Assn and Brotherhood Flag flourished. During the 1960's and the minority revolution in the US much of the money donated to the WPA went to the African American causes, NAACP etc. The idea of the UN changing its charter to include World Government seems to have faded a great deal.
Jud Fenner, 28 February 2009 Mostbet