A state of war has existed since 1980 as the Turkish government has repeatedly sought to crush the radical Marxist rebellion of the Kurds. Abdulla Ocalan founded the Partiya Karkeren Kurdistan (PKK, or Kurdish Workers' Party) in 1978.
T. F. Mills, 27 September 1997

Variants of the flag of PKK

These variants of the PKK flag have been reported in Gaceta de Banderas [ban] and Flaggenmitteilung [fml] #117, repectively.
Jaume Ollé, 4 October 1997

A.Basov of Minsk told me he saw many times the flag of Kurdish nation in Russia: a red field with a red five-pointed star on a yellow many-pointed star.
Victor Lomantsov, 7 July 2003

I've encountered this flag on the Internet as the flag of PKK (or KADEK after changing the name). That explains why Kurds use this flag!
Onur Ozgun, 7 July 2003

Red star in center of 21-pointed golden sun disc in the upper hoist of a red flag. This seems to be a variant of the original PKK flag, since it has the star and the red background of the PKK original flag but also the sun disc of the Kurdish Regional Government in Iraq.
Eugene Ipavec, 3 September 2005

A news photo at Yahoo.com shows a PKK flag, green, with a 40-rayed yellow sun disk (20 long, 20 short) and a red star at its center. The photo is captioned:
"A demonstrator flashes a V-sign before outlawed Kurdistan Worker's Party flag during the 'democracy and peace' demonstration organised by local non-governmental groups and pro-Kurdish parties in Diyarbakir, Turkey."
Eugene Ipavec, 23 November 2005

The depicted flag was shown in a rally of Kurds in Brussels on 1st October 2005, reported by euronews.net. The Kurds were protesting against the efforts of Turkey to join the EU. The flag was shown together with the red flag with green-edged yellow circle including a red 5-point star. So I think it is the flag of another Kurdish Socialist group.
Description of the flag:
Ratio unknown. The flag is rectangular. There is a yellow (FIAV-Code Y) sun on a plain green (FIAV-Code V+) ground. The sun includes a red (FIAV-Code R) 5-point star.
Klaus-Michael Schneider, 30th October 2005

I found this image on WikiPedia of some Kurdish demonstrators in London. The other flag bears the image of the captured leader of the PKK, Abdallah Ocalan.
Esteban Rivera, 3 September 2007

Another picture (upper left at http://www.rfi.fr/actufr/articles/054/article_28600.asp) shows this flag. The report (10 June 2004) concerns cultural and political developments in Turkey positive to the Kurds.
Jan Mertens, 4 September 2005 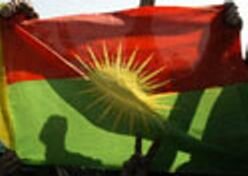 The other flag may already have been reported (horizontally divided red above green, a large yellow sun in the centre).
Jan Mertens, 4 September 2007