The flag appears on a photography published in "Courrier International" #421 (26 November 1998), to illustrate a paper originally published in "Far Eastern Economic Review" (Hong-Kong). The legend is "Official delegation and family members attending the funerals of Sanjanzurengiin Zorig, on 7 October 1998."

On the left side of the picture appears a partially rolled flag, something like vertically divided blue/red with a thin vertical white stripe in the middle and a white emblem in canton (a triangle below two "rabbit ears"?). I tried to render it as mn-unk.gif (UUencoded and sent separately). S. Zorig was a member of the Mongolian Democratic Union and one of the leader of the democratic movement of 1990. Can I infer that the unknown flag is the MDU party flag?
Ivan Sache, 10 December 1998

Description of the flag: A blue field bordered on the ends with red vertical stripes approximately 1/6 the length of the flag fly. Centered on the flag is a red star and within the star a yellow circle with a ying-yang symbol.
Phil Nelson, 17 February 1999

Could it be a flag of the Revolutionary People's Party ? It seems quite similar to the one we have on the site and the use of the bust behind them suggest "communist".
JoŃo Madureira, 2 July 2004; confirmed by Jens Pattke 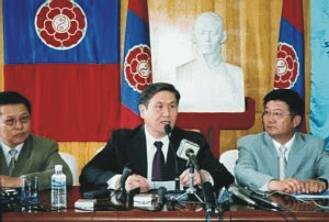 This is the new flag of the party. Is same as the old one but old emblem (ying yang and behind a red star) is moved to a ying yang on a lotus flower. The arrangement is VERTICALLY and not horizontally as in the reconstruction (and as is possible to see in the photo, in the right side flags. The one from the left side is a hanged normal flag and give the sensation that is horizontal, but stripes are vertical. I assume that the party changed its emblem when moved from communist ideology (red star) to a socialist one (lotus flower, that must be the equivalent of the rose in the westerner socialist parties). The old flags was still in their web page about five years ago, then change can happen about 2000.
Notice that the lotus flower is red instead orange. I believe that theres not any green device in the reproduction of the lotus flower.
Jaume Ollé, 3 July 2004

by Phil Nelson and Zeljko Heimer

The Mongolian Social Democratic Party (Mongolyn Sotsial-Demokrat Nam) won no seats in the Mongolian Parliament in the elections of 2 June 2000, but things may alter dramatically after the dramatic winter. The MSDP was a principal organizer of the opposition hunger strike of April 13-25, 1994, and won 12 Great Hural seats in 1996. Radnaas³mbereliyn Gonchigdorj was vice president of Mongolia from 1990 till 1997. (From: Political Handbook of the world 1997; and Fischer Weltalmanach 2001)
Jarig Bakker, 19 April 2001

The flag of the Motherland Democratic Coalition is in a 1:2 ratio, just like the national flag of Mongolia. The blue side is the hoist side, and it contains parts of the Mongolian flag symbol in white.
Source: the photo from Reuters
Zachary Harden, 28 June 2004