On 10 January 2010, the update of the status of Martinique to an Overseas Collectivity was rejected by referendum. The official results, as given by the Ministry of Overseas, are:

The same day, a similar proposal was also rejected in French Guiana.

On 25 January 2010, the merging of the General Council and of the Regional Council to form a single collectivity (without changing the status of DOM) was approved by referendum. The official results, as given by the Ministry of Overseas, are:

The same day, a similar proposal was also accepted in French Guiana.

The only official flag in Martinique is the French national flag.

The "snake flag" of Martinique

The "snake flag" is a banner of the arms of Martinique, made of a blue field quartered by a white cross and with a white, L-shaped snake in each canton. Devereux [dev94] claims that this flag flies only with the French Tricolour. This is most probably a confusion or an erroneous generalization of the status of the French Polynesia flag, which is official and prescribed in association with the French Tricolore.
The snake flag was indeed the flag of the former French colony of Martinique and Saint Lucia. The L-shaped snakes recall the "L" of Lucia, because Martinique was administrated from St. Lucia before the British took that island. However, this flag never flew on St. Lucia.

Léon Nyssen (Vexillacta [vxl], #9, September 2000) reports that the snake flag is locally considered as a "blazon" and not available locally. It is mainly, erroneously used as a courtesy ensign by yachtmen, which should hoist the Tricolore civil ensign instead.
Nyssen adds that the snake used for Martinique and St. Lucia is a venomous snake related to the rattlesnake, the trigonocéphale, very common in the sugar cane and banana plantations. Since the ensign is a banner of arms, the particular design of the snake is not specified. The snake has a triangular head (as its name says it in Ancient Greek) and a forked tongue. In the drawing shown beside the original text of the historical Edict translated below, the artist misinterpreted the snake name and gave it a triangular tongue instead of head. According to that drawing, the relation between the snake shape and the L of (St.) Lucia seems very dubious. Most "blazons" seen on stickers and postcards, however, show the "standard" snake, as drawn above by Pierre Gay (left). A L-shaped snake is shown in the the Guide Michelin Guadeloupe - Martinique - Petites Antilles and on the CIA Factbook, as drawn above by Luc Baronian (right).

Visiting the island in November 2001, Olivier Touzeau could see only one copy of the snake flag, hoisted near the Eruption Museum in Saint-Pierre, along with the flags of France, the European Union, Canada and the USA.

Often presented as "the local flag" or even "the flag of Martinique", this flag is not unanimuously accepted on the island. In January 2007, C. Duhamel, Secretary of the independentisy party MODEMAS sent an open letter to all the candidates to the French presidential election. The letter states that the snake flag, prescribed by the French colonial authorities and used by the ships involved into slavery, is used now on "all the houses" of the descenders of the European colonists ("békés") and, as a coat of arms, on public buildings and shoulder patches of the Gendarmerie. Accordingly, the MODEMAS asks all the candidates to promise to remove all the snake symbols from Martinique if elected.
The wording of the letter is, indeed, very outrageous, comparing the snake to the Nazi Hakenkreuz and using strong words like "social apartheid" and "racist cast". However, the letter expresses the resentment of the slaves' descendants against the French Republic and the economical control of the island by a few b&eacuteké families, which was the main cause of the riots that broke out in Martinique and Guadeloupe in spring 2009.

The history of the "snake flag" of Martinique is related by Léon Nyssen (op. cit.).
This flag was adopted as an ensign in 1766, and was nothing but a variant of the civil ensign used by French vessels. According to an Edict by Colbert (1689, confirming a previous Edict of 1661), merchant vessels should hoist a blue ensign with a white cross. Such ensigns were also used in the French ports. When a civil ensign was used in a colony, a distinctive emblem was added in each of the four blue quarters (example: the fleur-de-lis for the ensign of Nouvelle-France, the current flag of Quebec).

The Edict prescribing the Martinique and St. Lucia ensign can be found in Code de la Martinique, new edition by Durand Molaro, Saint-Pierre, 1807, volume 2, p. 487. The book was consulted by Nyssen at the Schoelcher library in Fort-de-France. Here is my translation.

Nr 359. - Edict of Messrs. the General and the Intendant, which requires any captain or owner of vessels, ships, schooners and boats of Martinique and St. Lucia to hoist a distinctive ensign [and which] set the ensign of these two Colonies. From 4 August 1766.

Since all places of the Kingdom and the Colony of St. Domingue have each of them a specific and distinctive ensign, so that one can identify from a distance to which harbours or countries belong the vessels which would like to enter any harbour or port of the French Colonies or approach the coasts, We found necessary to prescribe an ensign for the Colonies of Martinique and St. Lucia, which shall be described below. We, [...] rule on and prescribe the following:

Article 1.
Any owner of vessels, ships, schooners and boats, depending on the Government of Martinique and St. Lucia, shall equip their vessels with a blue ensign with a white cross which shall quarter the ensign; in each quarter, and in the middle of it, a white snake will be figured, so that there will be four white snakes in the ensign, which shall be recognized as the ensign of Martinique and St. Lucia.

Article 2.
When captains or owners enter the ports and harbours, or reach the coasts of this Government, of any other French Colony, or of the Kingdom of France, they shall order to hoist the ensign described above, so that they will be recognized as vessels from Martinique and St. Lucia, and they shall hoist it the same way the captains of the other ports of the Kingdom hoist their ensign.

Article 3.
Any owner of a vessel who, within the alloted time of three months after the release of the present Edict, will not have equipped himself with the ensign described above, shall be fined 300 pounds, to be allocated to the repairing of the Port of Fort-Royal [now Fort-de-France].

Article 4.
Any captain or owner who shall not conform to the present Edict and not hoist the distinctive ensign of the two Colonies when he approaches the coasts shall be fined 100 pounds, to be allocated as described above.

[We] commissioned the Admiralties of this Government to register the present edict [...]

Given to Martinique on 4 August 1766.
Signed: d'Ennery and President de Peinier

Flag of the General Council of Martinique

Flag of the General Council of Martinique - Image by Pascal Vagnat, 30 December 2001 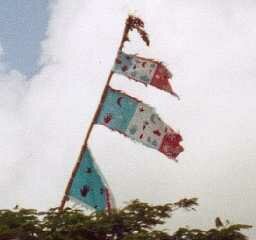 This picture was taken in Sainte-Marie, on the road to the Banana Museum. I saw those Tricolore flags with Muslim symbols flown near a rather isolated house. I suppose the house belongs to someone who fought during French decolonization in Northern Africa, but I may be wrong.