The Hausas are the dominant ethnic group in the North of Nigeria (40-45% of the population of the country), with Kano as Capital. In 1966, after an aborted coup, the federal system was to be abolished. The North reacted violently, because this abolishment was interpreted as a means to establish domination by the South (especially the Ibos). This movement, followed by tribal and political violence, led to the secession of Biafra (East). So this flag might have been used during one of the several military rebellions which ocurred in the North in 1966.
Source: Encyclopaedia Unversalis []
Ivan Sache, 12 September 1999

At this site a Hausa flag or something-like-a-flag.
Gvido

The flag shown at that URL is a LOB with the emblem of the Hausas, that was official in a green flag (within a white circle) and yellow cross fimbriated white from 12-12-1958 to 1963 as a Northern Region flag, probably later adopted by the Hausa people (or at least an organization). The emblem is named Northern Knot and was used in the Nigerian national flag for some months in 1963 (until October) as the North Nigeria regional flag. After October 1963 only the national Nigerian flag was in use.
Jaume Ollť, 5 March 1999 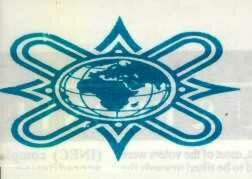 From the website of Today, a newspaper published in Abuja, Nigeria, another example of the 'Hausa symbol':
John Beadle 12 April 2000