I recently read some details of the Maori Independence (Tino Rangatiratanga) movement’s flag. The flag is black over white over red, with the thin white stripe being broken by a circular — almost spiral — pattern towards the hoist. It was designed in 1990 by Hiraina Marsden, Jan Smith and Linda Munn, and was the winning design in a national contest to find a “Maori Flag”. The symbology of the flag is as follows:

BLACK represents Te Korekore (the realm of potential being). It thus symbolises the long darkness from which the earth emerged, as well as signifying Rangi - the heavens, a male, formless, floating, passive force.
RED represents Te Whei Ao (coming into being). It symbolises Papatuanuku, the earth-mother, the sustainer of all living things, and thus both the land and active forces.
WHITE represents Te Ao Marama (the realm of being and light). It symbolises the physical world, purity, harmony, enlightenment and balance.
The spiral-like KORU, symbolic of a curling fern frond, represents the unfolding of new life, hope for the future and the process of renewal.

As a whole, the design represents the balance of the forces of nature, masculine and feminine, active and passive, potential and physical, air and earth. It can also be interpreted as symbolising the white cloud rolling across the face of the land, as in the Maori name for New Zealand, Aotearoa ("Land of the long white cloud"). Source: Otago University Student Newspaper The Critic, Issue 10, April 1996.
James Dignan, 21 August 1996

In the newspaper Dominion of 4 February 1998 there was a news report about a Maori-sovereignty flag of red, black and white which was flown above the national flag of New Zealand at a publicly-funded primary school of one hundred students, seventy of whom are Maori, in the Northland community of Helena Bay, 40 km northeast of Whangarei. This decision to fly the flag was reported to have angered several politicians and local residents who claimed the flag is offensive and inappropriate. Labour Maori-affairs spokesman Dover Samuels said that the red, black and white flag was not the Maori flag but rather a symbol for Maoris who believed New Zealand was a sovereign Maori state.
Michael Wang, 4 February 1998

The national holiday in New Zealand, Waitangi day, commemorates the signing of a treaty in 1840 between the British colonists and the Maori tribes of Aotearoa (New Zealand). Unfortunately (or fortunately, depending on your viewpoint) the commemorations were disrupted by Maori rights activists unhappy about parts of the treaty which have been poorly honoured over the 155 years since it was signed.

Protests at the Waitangi commemoration site prominently featured several flags representing Maori unity /independence / freedom etc., including the Tino Rangatiratanga flag described above. Another flag prominently displayed was the Kotahitanga, or flag of Maori Unity, which is described as follows:

A horizontal tricolour, red over white over black, featuring a circular emblem on the central stripe (and extending slightly onto the other two), nearer the mast than the fly. The emblem contains the word Kotahitanga ("Unity" - literally something like "of one people", but I’m no expert on the Maori language) curved around a central red circle containing two crossed white mere (clubs) over what looks like a vertical spear or staff.

To further explain the Kotahitanga movement, the word literally means "oneness", or sometimes "integration". "Kotahi" means either something which is unified or "same" (Tahi is the Maori word for the numeral "one"), and "Tanga" is the Maori equivalent of "ness", as in "oneness", or "ship", as in "chieftainship" ("ranatiratanga", with "rangatira" meaning "chief"). The Kotahitanga movement itself is based on the philosophy that in order to achieve anything, the Maori people must be united. At present, each individual Maori iwi (tribe) functions as its own individual entity, and there is no single organization or institution that can claim to represent all Maori (although several attempts have been made). The Kotahitanga movement seeks to create such an organization, believing that such is the best way to promote the interests of Maori. There is some quite deep debate over the merits of such a movement, with some Maori being strongly opposed to the idea, claiming that it will eventually destroy the iwi, severing ties with tradition and history. It does not help matters that different members of the Kotahitanga movement have different views about how far it should be taken.
Thomas Robinson, 3 January 2001


[Spotted at event reported bellow.] A very impressive flag in black, reddish-brown, green and white, featuring a star on an arch over a central green area, all surrounded by black. Vaguely reminiscent of the Kenyan flag.
James Dignan, 7 February 1997

This one is the flag of the self-sovereignty movement of the Tuhoe iwi (iwi = tribe, Tuhoe is pronounced TOO-hoy). The Tuhoe people have traditionally been the most vocal in their calls for Maori independence, and are based in the Central Eastern North Island in an area roughly bounded by the cities of Gisborne, Napier and Taupo.
James Dignan, 9 March 1999

The Tuhoe have always been one of the strongest and most vociferous North Island tribes, and have very strong tribal claims. The exact meaning of Mana Motuhake I do not know — although there is a Maori-based political party with the same name. Mana tends to mean power, strength, pride, status, or social/political prestige, so I would guess that Te Mana Motuhake o Tuhoe is some form of movement promoting the Tuhoe’s political or spiritual ideals.
James Dignan, 12 May 1997


I have occasionally seen it with the words "Te mana motuhake o Tuhoe" written in white capital letters on the black stripe at the bottom of the flag.
James Dignan, 15 March 1999

Maori use of the Red Ensign

The Red Ensign was (and is) widely used by Maori on land. The specific provision in New Zealand’s current flag legislation permits its use on land and the defacing of the flag, in a Maori context only. This sanctions the long-standing custom of applying white capital letters identifying the particular family or tribal group whose flag it is. There are many examples, old and current — one example in a photo to hand reads «TAKITIMU» — which is the name of one of the ancestral canoes, and thus of a grouping of tribes who are descended from its crew.
Stuart Park, 9 November 1996

According to traditional legends, the Maori arrived in New Zealand in twelve large canoes or waka, and some older, more tradition-minded Maori claim to be able to recite their whakapapa (lineage/ancestry) back to one of the twelve waka, much like the tradion in Israel of the twelve original tribes. In some cases, I think the iwi and waka names are the same, but in most cases this is not the case. For instance here, in the southern South Island, the main iwi is Kai Tahu (also known as Ngai Tahu), whereas the local waka was Takitimu.
James Dignan, 26 April 2000

There have been and still are many other flags used by Maori including the 1834 flag which is still flown as a sign of independence, alongside other more recent flags of Maori identity.
Stuart Park, 9 November 1996

February 6th in New Zealand is Waitangi Day, a day to commemmorate the signing of the treaty in 1840 between the colonial settlers and Maori natives. As always, Waitangi Day this year was the subject of Maori protests, mostly at the town of Waitangi itself. As always too, there were various Maori flags shown on the news - though sadly, as always, no explanation of them and no clear look at them! Because of this, these descriptions are extremely vague: A square flag with a large circle in the centre, such that it appeared to be a circle with four “corners”. The circle was bright yellow, the corners were a duller, orange-ish yellow. There appeared to be lettering on the circle, but I could not tell what it was.
James Dignan, 7 February1997

[Spotted at the same event as previous.] A dull red flag with a large black design in the centre, which appeared to be either abstract or a traditional Maori design. It looked vaguely like the Albanian flag.
James Dignan, 7 February 1997


[Spotted at the same event as previous.] A horizontally striped flag with three wavy stripes, black, deep red, white. The red might deep, possibly as deep as on the Georgian or even the Latvian flag.
James Dignan, 7 February 1997 and 15 March 1999 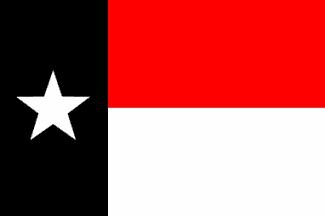 TVNZ news has just shown footage of a major hui (Maori tribal gathering) currently in progress, and one of the images briefly showed a flag. (NB - the image may not be 100% accurate - it was shown very briefly). The hui is being hosted by the Ngapuhi iwi (tribe) - I suspect it could be the Ngapuhi flag.
James Dignan, 29 January 2005