As the creator of the Pan American Games Fan Pages, I can contribute some information about the meaning of the symbols on the PASO flag. The Pan American Sports Organization Flag consists of the PASO logo on a white 1:2 proportioned field. The logo (adopted on 3/9/1954) consists of five concentric circles of yellow, green, white, red, and blue (from the center) around a light blue disc. A blazing torch is superimposed on the rings and disc. The colors of the rings can be found in the flags of the member nations. The games motto "America, Espirito, Sport, Fraternité" is emblazoned in black in a circle around the outer edge of the center disc. The motto is understood to mean "The American Spirit of Friendship Through Sports" The words appear in the 4 languages spoken in the Americas: Portuguese, French, Spanish, and English. The Olympic Rings were superimposed on the torch by PASO in October 1998 to symbolize the link with the Olympic Movement. The name of the organization, in English and Spanish appears in black letters along the bottom of the flag.

Evolution of the PASO/ODEPA flag

When the Ist Pan American Games were held in Buenos Aires in 1951, the Olympic Flag was used. The IOC objected strongly to this, and PASO adopted its own logo and flag in 1955 for the IInd Pan American Games.
Erik Bell, June 14, 2003.

I finally was able to watch the Opening and Closing Ceremonies of the 1999 Pan American Games which took place in Winnipeg. I was quite surprised to find that a new ceremonial PASO flag was used. I'm not sure if the flag design shown above was a one time only thing or if it is a permanent change.

The ceremonial flags at the 1967 and 1987 games only had the logo on them. The 1991 ceremonial flag had and the display flags in PASO's meeting room have the full name of the organization in Spanish and English on the bottom. (This is the flag that appears on my website and the one I submitted to FOTW.)

I do not know which design was used in 1995. The 1999 ceremonial flag displayed the logo on a white field. On either side of the logo's flame was ODEPA and PASO in large black letters. The names at the bottom was omitted. This was the first time the olympic rings appeared on the logo's torch after having been added in 1998.

In 1998, PASO voted to alter the flag again. This time the Olympic Rings were superimposed over the torch in the logo, and the English and Spanish initials of the organization were placed on either side of the flame on the torch. The text was dropped from the bottom of the flag. This design was first used at the 1999 games in Winnipeg.
Erik Bell, June 14, 2003.

Variant of the PASO / ODEPA flag


To further confuse matters, a second flag was resented to the mayor of Indianapolis by PASO President Mario Vazquez Rańa during the Opening Ceremony of the 1987 games. This flag was the size of the flags used for the parade of nations, but was not attached to a pole. The flag had the logo on a white field with ODEPA in large black letters above the flame, and PASO curved underneath the logo. This flag was not used in 1991 or 1999. 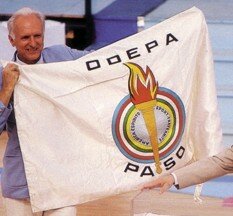 This os the photo of the smaller 1987 PASO Flag. Indianapolis Mayor William Hudnut is shown holding the flag as PASO President Mario Vasquez Rana looks on during the Opening Ceremony.
Erik Bell, April 11, 2003.

It should be cleanly drawn letters similar to the ODEPA.   I just couldn't figure out how to draw the letters that way at an angle.   The picture I've seen of it (in the official commemorative book of the 1987 games) shows the PA on one side of the torch handle and the SO on the other.   Both are curved around the bottom edge of the disc.  The letters PASO appear to be slightly smaller than the ODEPA above the flag.   In fact, the letters ODEPA are slightly bolder.   Its hard to describe.  I wish I could scan the photo but I don't have a scanner.   The letters ODEPA look "squashed".  That is, they appear slightly wider compared to their height than you would expect.
This flag appears to have been used the way the Oslo and Antwerp Flags are used at the Olympics and Winter Olympics.  Now that I think about it, this flag may have appeared at the closing ceremony of the 1999 games.   PASO President Mario Vázquez Rańa, in his closing speech, asked the Mayor of Winnipeg to present the PASO flag to the Mayor of Santo Domingo.   The two mayors exchanged something that looked like a white handkerchief,   which might have been this flag folded up into a small square.   I know it wasn't the ceremonial flag because it hadn't been lowered yet. I hope this helps. 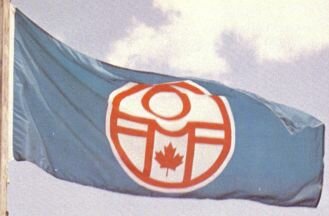 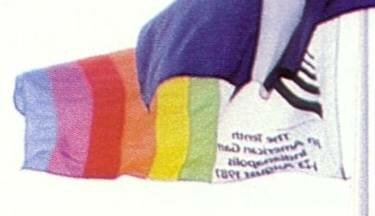 Above, the Flag of the 1987 organizing committee, PAX-I. It consists of the 1987 Games logo in black on the hoist with the words:

In black next to it, all on a white field. The fly consists of six colored stripes. From the hoist toward the fly they are Green, Yellow, Orange, Red, Purple, and Blue.