Nowy Targ County (Powiat Nowotarski) is in Malopolskie Voivodship. Its capital, Nowy Targ (meaning "New Market", German: Neumarkt), is a town of 36000 inhabitants, about 80 km south of Cracow. The city was founded in 1238.

The CoA of Nowy Targ County was adopted by a resolution of the County Council on August 11, 2000. On field gules there is a crown or and a scepter or, diagonally placed. The crown is shaped after the crown of Casimir the Great, king of Poland 1333-1370, who spurred the economic development of the area. In 1346 Casimir re-incorporated the city of Nowy Targ. The scepter is shaped afted that of sculpture of Our Lady of Ludzmierz, representation of Mary highly revered among the local inhabitants, mostly highlanders. The scepter is placed diagonally to commemorate an event which happened in Ludzmierz in
1963. During the feast of Assumption, the primate of Poland, Stefan cardinal Wyszynski was crowning the sculpture. After the crowning, four bishops carried the sculpture back to the parochial church. As they leaned to one side, the sculpture's scepter fell out and the one to catch it in the air was Karol Wojtyla, then bishop of Cracow. It was later interpreted as a sign that he would be elected pope. 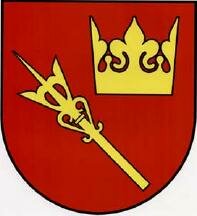 image from this site, reported by Jarig Bakker, 1 Oct 2000